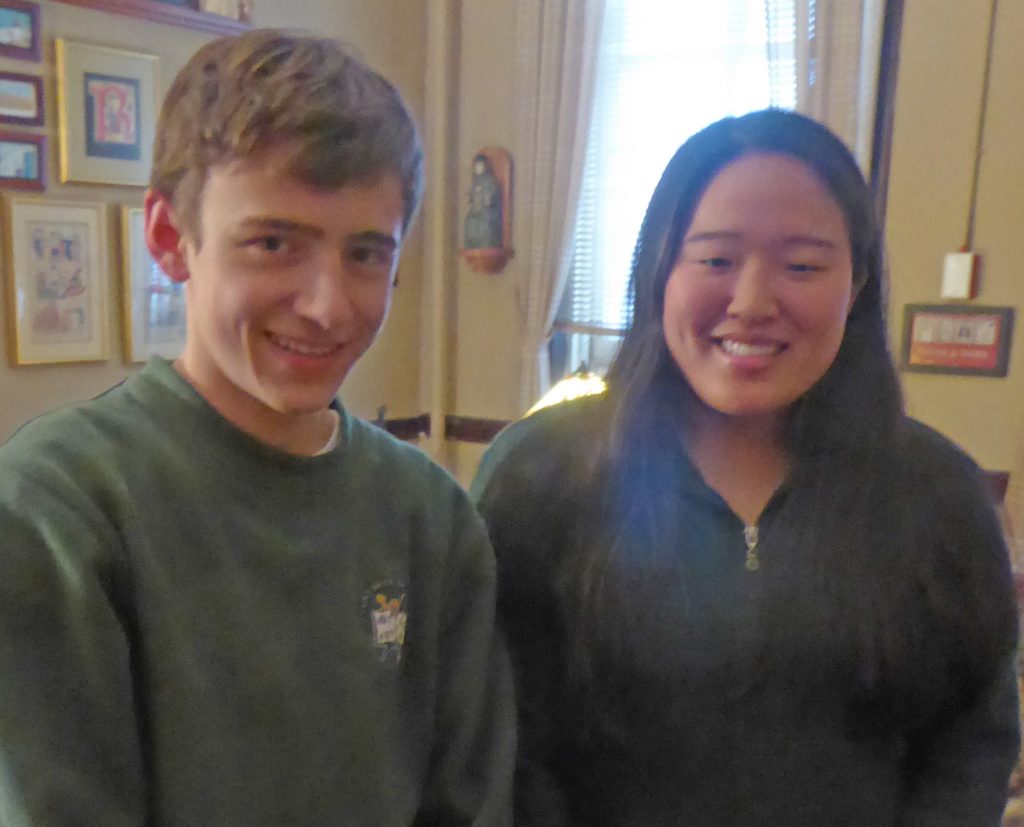 Sophomore Logan Zeglis and senior Olivia Smith got creative and had fun with their projects. (Provided photo)

PERU — Making the Gospel come alive often leads to programs involving committees, meetings, and great sums of money. But could you do it with $20?

That’s what Father Ronald Margherio, OSB, challenged eight students and two teachers at St. Bede Academy to do between Thanksgiving and the time they returned from Christmas break on Jan. 10. The longtime chaplain based the lesson on the parable of the 10 gold coins in Luke 19:12-26.

As the nobleman in the parable did, Father Ronald gave each of them money — in this case $20 — and asked them to use it in a way that would increase its value. Whatever was raised over and above the initial investment of $200 would be given to charity.

“In my homily I talked about how all of us are given gifts. What do we do with those gifts God has given us?” — Father Ronald Margherio, OSB, Chaplain, St. Bede Academy, Peru

None of the people selected knew what they would be asked to do before walking into church for Mass at Thanksgiving, he said.

“In my homily I talked about how all of us are given gifts,” Father Ronald said. “What do we do with those gifts God has given us?”

He called them forth and gave them a sheet of paper with ideas for fundraisers, encouraging them not to stop at one thing, but to keep going.

“And there were no rules about going together,” he told The Catholic Post. “They could have gone together on a project and pooled their money.”

Some of the students asked their family and friends for donations. Senior Ethan Borelli made $188 by putting together a lottery ticket board and raffling it off at a home basketball game, while freshman Renn Ludford raised $227 by buying the ingredients to make treats, which she sold at a girls’ basketball tournament.

Religion teacher Francis Hejmanowski had a Sports for Christ League and students paid to play games and won gift cards to Culvers. He also raffled off an autographed photo of Marian Hossa of the Chicago Blackhawks that had been donated by a student, bringing his total to $686.

At the suggestion of his aunt, sophomore Logan Zeglis bought popcorn that he popped, seasoned with a variety of flavors, and sold by the bag. He took the profits from that to rent equipment and worked with his father to cut firewood.

“The firewood sold really quick — a lot of people needed firewood,” he told The Post. “We sold five pieces for about $5 each.”

Not only did the experience give him time to bond with his aunt and his father, but he had fun.

“I’m glad I did it,” Zeglis said. “It was stressful at first, but in the end it worked out.”

Senior Olivia Smith used her $20 to buy art supplies and painted two watercolors for a friend.

“Everyone raised the money in a different way — in a really cool and kind of fun way,” she said. “I took away that we can bring our individuality into doing something really good for others.”

The charities that will benefit include Smile Train, supported by the seniors, which helps children born with cleft palates, and Zakat Foundation of America, championed by the juniors, which offers assistance with food, shelter and orphan sponsorship. The sophomores raise money for Heifer International, while the freshmen support people in need in Kamakwie, a small town in Sierra Leone.