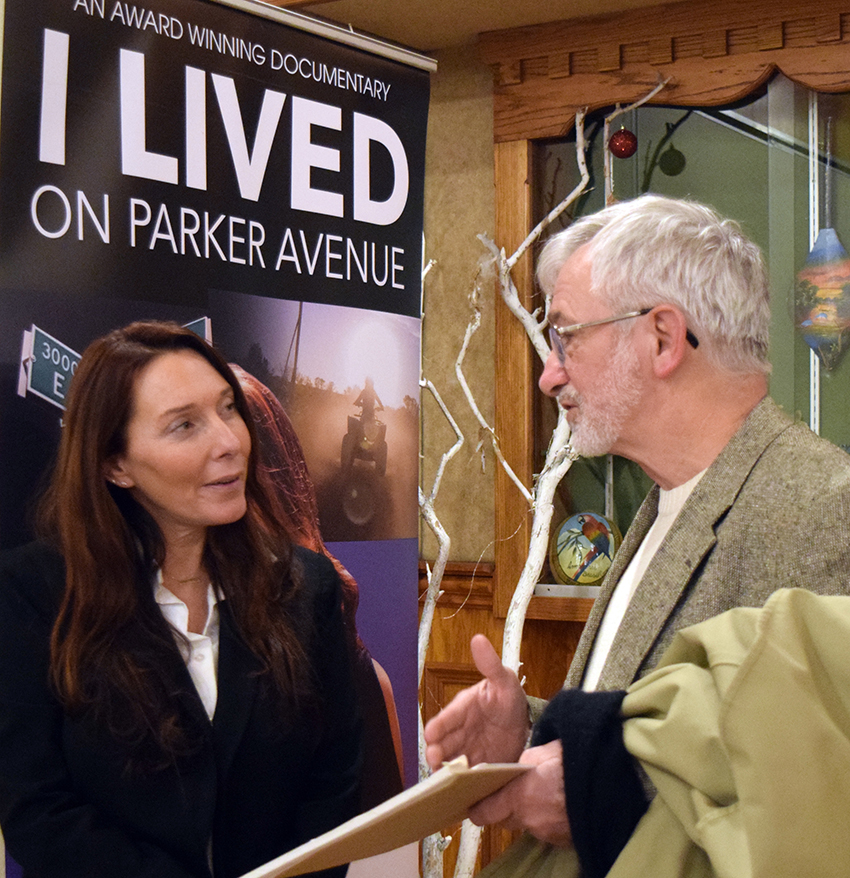 Melissa Coles, keynote speaker at the Sanctity of Human Life Rally on Jan. 24 in Peoria, speaks with Ken Goins, president of Central Illinois Right to Life, following the annual event. Coles' last-minute decision not to abort and later place her son for adoption is the focus of the documentary "I Lived on Parker Avenue." (The Catholic Post/Tom Dermody)

Melissa Coles’ presentation at the Sanctity of Human Life Rally in Peoria on Jan. 24 had been memorable for many reasons. But the Indiana woman, whose last-minute choice 25 years ago not to abort her unborn child is the focus of a half-hour documentary, wanted her audience to leave Riverside Community Church remembering — and putting into action — those four words.

“That’s my hashtag for this year,” said Coles near the end of what a local pastor called “one of the most tear-jerking right-to-life rallies we’ve had.”

The annual rally, sponsored by Central Illinois Right to Life, took place on a night so cold and icy that the scheduled opening prayer walk around the nearby Federal Courthouse block had to be canceled. And it came two days after pro-life legislative setbacks in New York and Illinois on the 46th anniversary of the U.S. Supreme Court decisions legalizing abortion.

“It feels like we just took 20 steps back,” acknowledged Coles, who said she shared the anger being expressed by many. “But God’s got our back,” she added, urging those in attendance to respond with love, not hate, and pro-life action including financial support, volunteerism, and prayer.

“So let’s be angry together,’” she said. “Let’s be sad together. Then, let’s figure out what we can do together so we can fix it.”

The story of how God fixed near-tragic choices by Coles in her youth is told in “I Lived on Parker Avenue,” the documentary that she has criss-crossed the nation promoting for the last year. 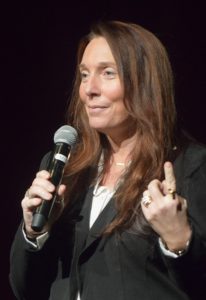 Melissa Coles challenged pro-lifers to constantly ask “How can I help?” (The Catholic Post/Tom Dermody)

Shown at the start of the rally, the film blends actual footage and re-enactments to tell how Coles, then unwed and pregnant, went to an Indiana abortion facility in the early 1990s to end the life of her unborn son. Just seconds before the procedure was to begin, however, she recalled the words from a protester outside the clinic who had shouted “Your baby has 10 fingers and 10 toes.”

Coles halted the procedure, eventually gave birth to a son, and placed him for adoption.

The documentary shows “how one decision can change the lives of so many people,” said Coles. It describes how the adoption brought joy to a couple in Louisiana struggling to have children; how her birth-son, David, reunited with Coles and his birth-father two decades later; and how the reunion has brought healing after two decades of struggle and secrecy.

The film, which Coles showed earlier in the day at Peoria Notre Dame High School, can be viewed online at ILivedOnParkerAve.com.

“I want every pregnancy center throughout the United States to have this film as a resource,” said Coles. “It’s 30 minutes, and it can save a life.” In fact, Coles said the film has already resulted in at least four women making the choice for life over abortion.

“The message we’re trying to get out is bringing back the beauty of adoption and the resources that are now there to help,” she said.

Coles, now married with a 16-year-old daughter, followed her brief presentation by fielding about a dozen questions from rally attendees.

To illustrate how “sidewalk counselors don’t get the credit they deserve,” she recalled the details of her visit to the abortion facility. While people take different approaches in their prayer and protest outside clinics — and there is debate about the appropriateness of graphic signs, shouts at the women as they enter, for example — Coles said one never knows what God might use to change a mind.

“It was the voice of the more aggressive sidewalk counselor that caught my attention,” pointed out Coles, who said her nature is more reserved in public.

Ken Goins, president of Central Illinois Right to Life, welcomed those who braved the bitter cold “to stand for life and fight for those who can’t fight for themselves.”

He and John King, pastor of Riverside Community Church, echoed Coles’ call for united action after the setbacks of the previous week.

“For me, that’s just saying the devil’s getting desperate and we need to fight on and keep believing that we’re doing what God wants us to do,” said King.

“We can’t lose heart because we know Who is really in charge,” added Goins.

Attendees had a chance to connect with several area pro-life organizations that had booths at a reception that followed the rally.