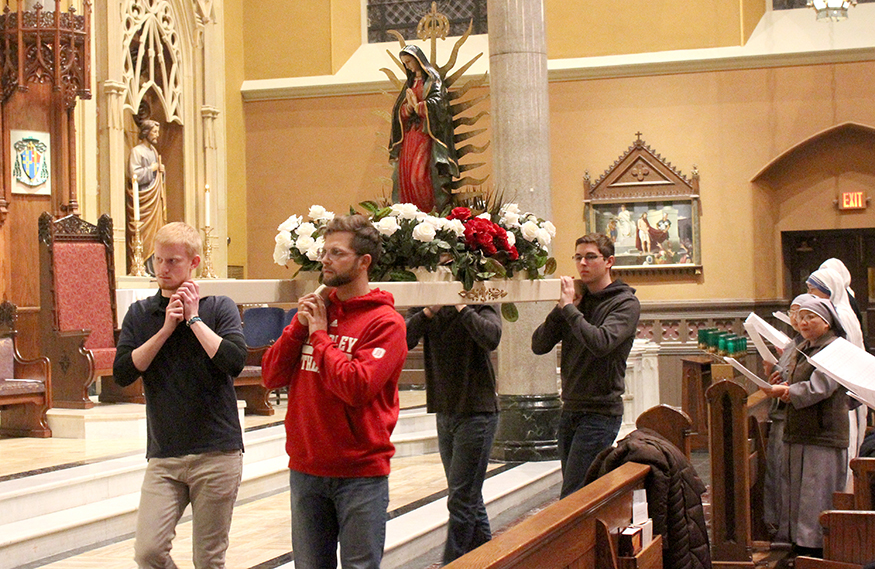 In the midst of all the activity that surrounds the anniversary of Roe v. Wade each January, respect life advocates took time to pray quietly before the Blessed Sacrament at St. Mary’s Cathedral in Peoria and ask God for healing, forgiveness and the legal protection of unborn children. 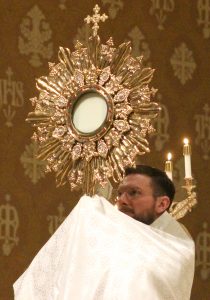 Bishop Daniel R. Jenky, CSC, celebrated Mass for the clergy, women religious, students from Newman Centers around the diocese, and parishioners who braved another snow storm and icy roads to be at the cathedral on Jan. 25. He praised them for “risking Siberian wolves, glaciers and I don’t know what else” to come together as God’s flock, “united in prayer that the Gospel of Life will have victory in our time.”

As Mass ended, the bishop told them their prayer was “enormously helpful” and expressed his gratitude for the work done by the parish respect life representatives.

“Year after year you witness to Christ and his Gospel of Life. If I could say anything with absolute assurance, it is that God reads your hearts and will bless you for your witness,” he said.

As the Holy Hour was about to begin, Phil Lee, director of the diocesan Office of Divine Worship, called for a moment of silence to honor all the lives lost since abortion was legalized 46 years ago.

Once Father Alexander Millar, rector of the cathedral, had exposed the Blessed Sacrament for adoration, a rosary was offered “for the protection of all life, for the conversion of all hearts, and the healing of those who have suffered or participated in abortion,” said Sister Judith Ann Duvall, OSF, of OSF HealthCare and major superior of The Sisters of the Third Order of St. Francis.

The Sorrowful Mysteries of the rosary were led by Sister Lea Stefancova, FSJB, an archivist for the Diocesan History Museum; Julia Garcia, a member of the Cathedral Children’s Choir; Erin Earl, a student at Peoria Notre Dame High School; Juana Luz Garcia, Julia’s mother and co-director of the Cathedral Children’s Choir; and Colleen Harmon, who assists with the respect life ministry of the Diocese of Peoria.

“A WORK IN PROGRESS” 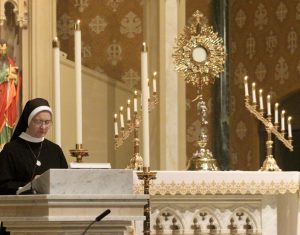 Sister Lea Stefancova, FSJB, leads the a decade of the The Sorrowful Mysteries of the rosary. (The Catholic Post/Jennifer Willems)

The point of that conversion is to conform our intellect, our will, and our ability to love to that of God, according to Father Cesarek, parochial vicar of St. Mary in Pontiac, St. Joseph in Flanagan, St. Joseph in Chenoa, and St. Mary in Lexington.

He asked people to pray for those who are still undergoing a conversion of mind and heart when it comes to abortion. That conversion is possible, he said, pointing to Abby Johnson, who once worked for Planned Parenthood and now helps other employees leave.