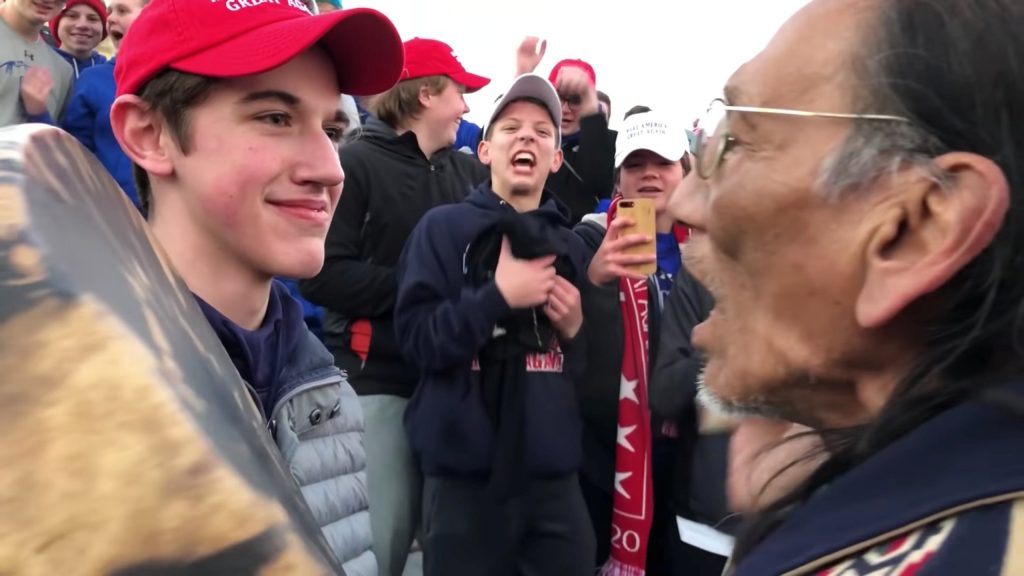 Students from Covington Catholic High School in Park Hills, Ky., stands in front of Native American Vietnam veteran Nathan Phillips Jan. 18 near the Lincoln Memorial in Washington in this still image from video. An exchange between the students and Phillips Jan. 18 was vilified on social media the following day, but the immediate accusations the students showed racist behavior were stepped back as more details of the entire situation emerged. (CNS photo/Kaya Taitano, social media via Reuters)

WASHINGTON (CNS) — An exchange between Catholic high school students and a Native American tribal leader in Washington Jan. 18 was vilified on social media the following day, but the immediate accusations the students showed racist behavior have been stepped back as more details of the entire situation have emerged.

Many say the incident still needs to be investigated or discussed and others have pointed out that what happened can still provide a teaching moment not just about racism but also about news coverage and social media’s rapid response.

The student most prominent in the footage, junior Nick Sandmann of Covington High School in Kentucky, issued a statement Jan. 20 saying he has “received physical and death threats via social media, as well as hateful insults” based on reaction across social media. He also said he would cooperate in any investigation church leaders plan to undertake.

The group’s chaperones, also criticized on social media, said later the students “were targeted from the get-go.”

On Jan. 18, tens of thousands gathered in Washington for the annual March for Life, a march along Constitution Avenue after a rally on the National Mall to the Supreme Court to mark the court’s Jan. 22, 1973, decision that legalized abortion.

The march, held a few days before the actual anniversary this year, took place on the same day as the first Indigenous People’s March where marchers walked in the other direction on Constitution Avenue to draw attention to injustices against indigenous people.

At the day’s end, while students from Covington Catholic High School who had attended the March for Life were waiting for their buses to pick them up near the Lincoln Memorial, they met up with members of the Indigenous People’s March, in particular Nathan Phillips, tribal elder for the Omaha Tribe.

In clips from a video that went viral almost immediately, students are shown surrounding the leader, who is chanting and beating a drum. They appear to be mocking him and one student in particular, who is inches away from the drummer and never moves, was accused of flagrant disrespect.

Some students in the crowd were identified by their Covington High School sweatshirts but the attire that drew the most rage was the “Make America Great Again” hats worn by a few in the group. That phrase, which President Donald Trump coined during his successful presidential campaign, has been deemed to be “racist” by his opponents.

In response to the escalating fury and disgust on social media against these students, Covington High School and the Diocese of Covington issued a joint statement Jan. 19 saying they condemned the students’ actions “toward Nathan Phillips specifically, and Native Americans in general.”

“We extend our deepest apologies to Mr. Phillips. This behavior is opposed to the church’s teachings on the dignity and respect of the human person,” it said, adding that the incident was “being investigated and we will take appropriate action, up to and including expulsion.”

The school and diocese also said the event “tainted the entire witness of the March for Life” and they apologized to those who attended and “all those who support the pro-life movement.”

March for Life president Jeanne Mancini also issued a statement that day saying the encounter did not represent her organization or “the vast majority of the marchers” and that the students’ behavior is not welcome at the march and never will be.

The next day the March for Life said it in a tweet had deleted its original tweet about the students “given recent developments.

“THERE’S MORE TO THIS STORY”

It is clear from new footage and additional accounts that there is more to this story than the original video captured. We will refrain from commenting further until the truth is understood,” the tweet said.

The day after the initial clip of the exchange went viral, extended footage of how the situation unfolded appeared on social media, and the students issued their own statements about it, like Sandmann, who was directly in front of the Native American drummer.

Longer videos shown online reveal that another group at the foot of the Lincoln Memorial included members of the Hebrew Israelites, who also were attending the Indigenous People’s March to share their own beliefs that African-Americans are God’s chosen people and the true Hebrew descendants.

“SOMETHING THAT DID NOT HAPPEN”

Sandmann, in a statement, said Phillips “locked eyes with me and approached me, coming within inches of my face.”

“I did not speak to him. I did not make any hand gestures or other aggressive moves. To be honest, I was startled and confused as to why he had approached me. We had already been yelled at by another group of protesters. … I was worried that a situation was getting out of control.”

Sandmann said the group started doing school spirit chants to “counter the hateful things that were being shouted at our group” and they had asked for chaperone permission to do so.

He said he stayed motionless to help diffuse the situation and also prayed silently that it would not get out of hand.

“During the period of the drumming, a member of the protester’s entourage began yelling at a fellow student that we ‘stole our land’ and that we should ‘go back to Europe.’ I heard one of my fellow students begin to respond. I motioned to my classmate and tried to get him to stop engaging with the protester,” an action that can be seen on the video where he motions to the student to stop and points and nods to the tribal leader.

The student said he didn’t understand “why either of the two groups of protesters were engaging with us, or exactly what they were protesting” and that his group was just there to meet a bus, “not become central players in a media spectacle.”

“I was not intentionally making faces at the protester. I did smile at one point because I wanted him to know that I was not going to become angry, intimidated or be provoked into a larger confrontation. I am a faithful Christian and practicing Catholic, and I always try to live up to the ideals my faith teaches me — to remain respectful of others, and to take no action that would lead to conflict or violence,” he added.

The student said he has been called “every name in the book, including a racist” and has received death threats and hateful insults.

“I am mortified that so many people have come to believe something that did not happen — that students from my school were chanting or acting in a racist fashion toward African-Americans or Native Americans. I did not do that, do not have hateful feelings in my heart, and did not witness any of my classmates doing that,” he said. His statement was posted on the CNN website, https://cnn.it/2FOLNCC.

A local CBS-affiliate, WKRC in Cincinnati, also received statements from students, some who asked to remain anonymous, also saying they were unfairly portrayed in media coverage of this incident.

Chaperones, also criticized on social media, spoke to the TV station reiterating that the students had been taunted. “They were targeted from the get-go. Immediately, there were people running around filming and this isn’t going to be a truthful depiction of what happened,” one chaperone said.

Jesuit Father Jim Martin, an author and editor of America magazine, who was critical of the students’ behavior on Twitter Jan. 19, said in a tweet the following day that he would be “happy to apologize for condemning the actions of the students if it turns out that they were somehow acting as good and moral Christians. The last thing I want is to see Catholic schools and Catholic students held in any disrepute.”

He also tweeted: “We may never know exactly what happened and the various ‘sides’ may continue to disagree and condemn one another. But I hope the truth emerges.”

He said the situation can provide a teachable moment with “important lessons about racism and marginalization, about dialogue and encounter, and about truth and reconciliation, during this coming week, which is, believe it or not, Catholic Schools Week.”

Eileen Marx, a religion teacher at Notre Dame High School in Lawrenceville, New Jersey, who also is the faculty moderator of the school’s diversity club, told Catholic News Service Jan. 21 that she certainly planned to discuss this incident with her classes this week in light of Catholic social teaching which “so clearly states that we are meant to live in relationship with one another, not as enemies. We are all part of the human family.”

She also acknowledged that there is more to discuss now as more details of what happened after the march are emerging.

As this story continues to be sorted out, she said, she also will bring up the role of social media with her students and its power to “build up and to knock down individuals.”