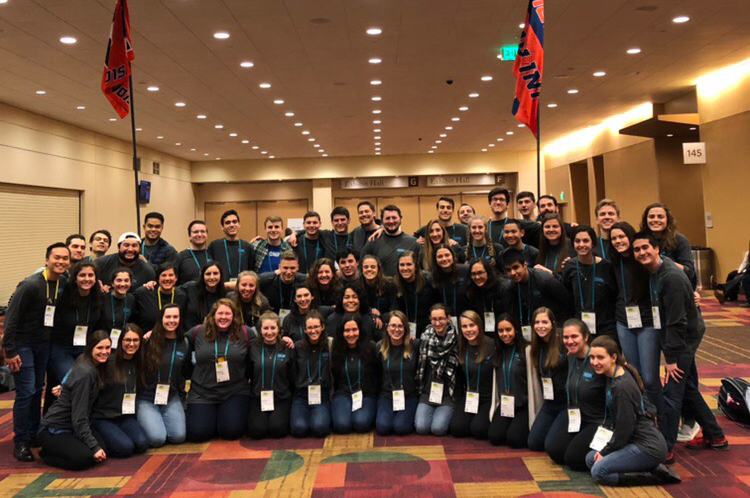 This is only about two-thirds of the group of 72 from the St. John's Catholic Newman Center at the University of Illinois that attended the SEEK2019 conference in Indianapolis Jan. 3-7. The biannual gathering is sponsored by the Fellowship of Catholic University Students. (Provided photo)

The nearness of a major Catholic gathering led nearly 150 college students, young adults, priests and Religious from the Diocese of Peoria to begin 2019 by deepening their faith at the SEEK2019 experience in Indianapolis.

“Faithful Catholics often feel isolated or alone in their school or workplace,” said Father Chase Hilgenbrinck, who accompanied a group of 72 from the St. John’s Catholic Newman Center at the University of Illinois in Champaign to the Jan. 3-7 event sponsored by the Fellowship of Catholic University Students (FOCUS). 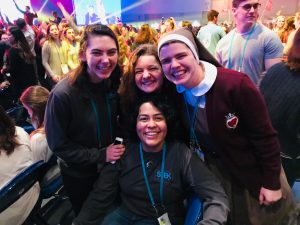 “But when you attend a conference with 18,000 other Catholics who desire to grow in their faith, they come back unafraid, with an experience of how immense and how truly awesome it is to belong to Jesus Christ,” added Father Hilgenbrinck, an assistant chaplain at the Newman Center.

Among those seeking that solidarity at the biannual event was Alex Buldak, who graduated from Illinois State University in Normal last May and is in his first year as a freshman theology teacher at Alleman High School in Rock Island.

“I had been wanting to go to a SEEK conference since my Newman friends in my early years at ISU went on them and would talk about how great they are,” said Buldak, adding that watching keynote talks from previous conferences online also heightened his interest. “Especially as a theology teacher, it was awesome to be completely immersed in the Catholic world that I get to talk to my students about every day.”

NOT ALL WERE COLLEGE STUDENTS 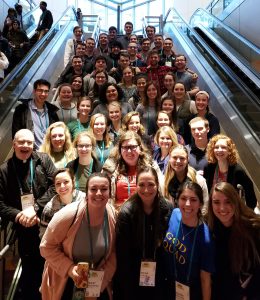 Those who traveled to Indianapolis with the St. Joseph Catholic Newman Center at Bradley University in Peoria pose for a group photo at the Indiana Convention Center. (Provided photo)

Not all of the attendees from the diocese, however, were college students.

Emma Bucher, 28, is a psychologist and a member of Blessed Sacrament Parish in Morton. She attended a SEEK conference four years ago in Nashville and it became part of her journey to Catholicism.

“The Holy Spirit is quite obviously present at these sorts of events and you can’t help but feel inspired, convicted, rejuvenated, etc.,” she told The Catholic Post. “I was very excited to hear that SEEK was in Indy this year and knew I had to go.”

“It was a great blessing to watch as they encountered Jesus throughout the weekend,” said Father Cesarek, who is parochial vicar at the Pontiac parish as well as faith communities in Flanagan, Chenoa, and Lexington.

Both Father Hilgenbrinck and Bucher pointed to a talk by Sister Miriam — an author, speaker, and member of the Society of Our Lady of the Most Holy Trinity — as particularly impactful.

“I was deeply moved by what she was saying,” said Bucher. “She referred a great deal to C.S. Lewis’ novel ‘Til We Have Faces,’ which was a powerful read for me when I was first converting to Catholicism and working through some dark parts of my soul. She was just superb.” 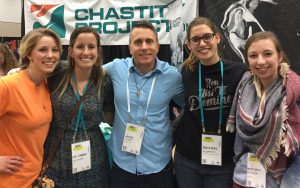 “She looked out upon nearly 18,000 college students and tactfully referred to the horrors of the priestly scandal in our Church,” said Father Hilgenbrinck, “and then boldly invited every young man to consider that Jesus Christ might be calling them to a priestly vocation in order to join the faithful priests who remain in restoring our Church.”

For Father Cesarek, a profound moment came at the end of Mass when hundreds of priests lined up for a blessing from Denver Archbishop Samuel J. Aquila.

“My faith was emboldened, thinking to myself, what an amazing gift to be here with so many brother priests who are working in the vineyard with me,” said Father Cesarek. “I couldn’t help but think that God is doing something great here and, by His grace, we can turn the tide of the culture we live in.”

The five-day experience will have a lasting impact on the participants.

“I can share all of the experiences and insights from the conference with my students,” said Buldak.

Bucher said she is “feeling on fire” for the faith and hopes to form deeper relationships with the women with whom she attended SEEK2019.

Among the unique aspects of the 2019 conference: