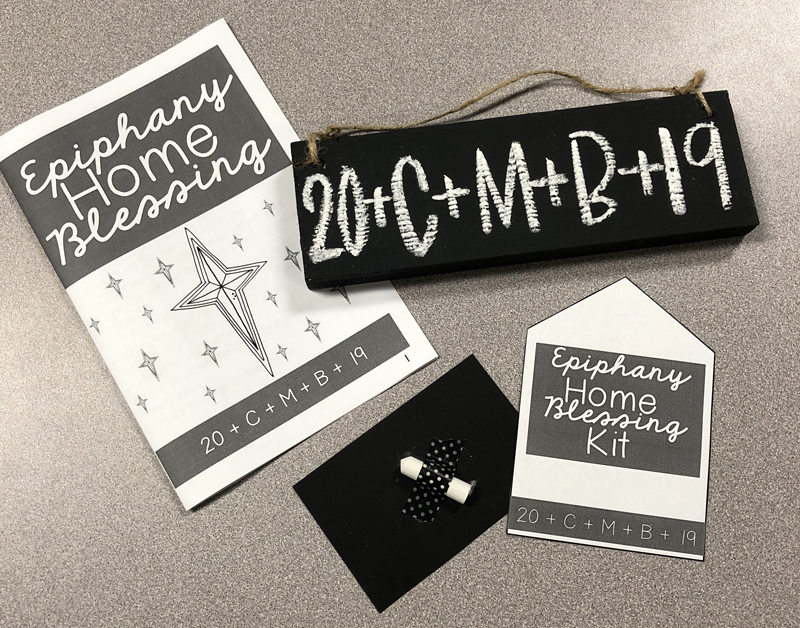 Katie Bogner of Chillicothe developed this home blessing kit for the Solemnity of the Epiphany when she was teaching at St. Joseph School in Pekin. She said it is one of the most popular lessons she has developed. (Provided photo)

No one could call the stable in Bethlehem a home, but the Holy Family made it a warm and welcoming place for shepherds and magi alike to encounter Jesus.

It has become a tradition to bless homes on Epiphany as a way to remember that our homes are also places where people will encounter Christ, according to Katie Bogner, who teaches junior high religion at St. Philomena School in Peoria and serves as director of religious education at Immaculate Conception in Lacon.

The house blessing is one of her favorite Epiphany lessons, and she developed a kit to send home with her students last year, when she was teaching at St. Joseph School in Pekin. It was so popular that she published it on her blog, looktohimandberadiant.com.

“It really doesn’t take any time or preparation,” Bogner said. “It’s something you can do very easily.”

As tradition has it, the parish priest would go from house to house on Epiphany and bless each one. On the doorpost he would use chalk to write the year and the initials of the three Wise Men — Caspar, Melchior, and Balthasar. The blessing for 2019, for example, would be 20+C+M+B+19.

Bogner said those initials are also the abbreviation for a Latin phrase, “Christus mansionem benedicat,” which means “Christ bless this house.”

She designed a booklet with a short prayer service, adapted from materials from the U.S. Conference of Catholic Bishops. In the kit she sent home with her students, she also included a piece of chalk and a small piece of wood that had been sprayed with chalkboard paint, so the blessing could be written on it by the family and hung by the door.

“If people don’t want to or don’t have the time or resources to do the piece of wood, you could also use a piece of black paper and write on it with chalk and tape it up so it’s still visible,” Bogner said, adding that the blessing could also be written on a piece of white paper with a marker.

When the doors are chalked — inside or outside — it is customary to leave it until it comes off on its own or is replaced with a new blessing on the following Epiphany.

CELEBRATING “LIGHT OF THE WORLD”

The feast is a rich source of many other beloved traditions during the Christmas Season, according to Bogner. For example, many family celebrations take place around a tree decorated with lights and topped by a star as they open gifts.

“Jesus himself got three gifts. He got those on Epiphany, when the Wise Men came,” she said, noting that students are sometimes surprised that he only got three, when they usually receive more.

“The real gift that we receive, of course, is the gift of Jesus. I like to remind them that we exchange gifts with one another to honor that and celebrate it, to share the love that Jesus gave us with other people.”

She often goes further, talking about how the gifts of gold, frankincense and myrrh that Jesus received symbolized the roles of priest, prophet and king he would play later in life. They also foreshadow his crucifixion.

“The real gift that we receive, of course, is the gift of Jesus,” Bogner said. “I like to remind them that we exchange gifts with one another to honor that and celebrate it, to share the love that Jesus gave us with other people,” Bogner said.

Decorating with strings of lights and stars — and placing one at the top of the Christmas tree — is reminiscent of how the Magi found Jesus by following a star. And while there are many stars in the sky, Jesus, who is celebrated as the Light of the World, is the brightest, she explained.

EDITOR’S NOTE: To download a copy of the house blessing booklet, complete with suggested readings, prayers and hymns, visit looktohimandberadiant.com.