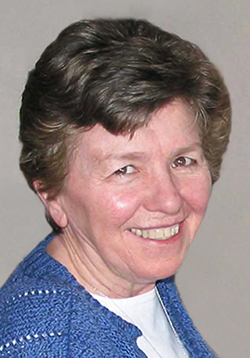 ROCK ISLAND — A Mass of Christian Burial will be celebrated at 11 a.m. on Friday, Jan. 4, in the chapel of St. Mary Monastery, for Sister Audrey Cleary, OSB. Burial will follow in Calvary Cemetery, also in Rock Island.

Born in Bloomington on Jan. 2, 1940, Sister Audrey was the daughter of Michael and Clarys (Fulton) Cleary. She attended El Paso Grade School and was a graduate of the Academy of Our Lady in Peoria.

Sister Audrey’s mother and Venerable Archbishop Fulton J. Sheen were first cousins and good friends, and Sister Audrey was able to spend time with her first cousin once removed as an adult, according to her sister, Sister Catherine Cleary, OSB.

Their mother taught Sister Audrey to read when she was 4 years old and she remained an incessant reader throughout her life, Sister Catherine added.

In 2010, on the occasion of the 50th anniversary of her profession of vows, Sister Audrey recalled how much of her parish ministry was devoted to teaching contemplative, centering, and devotional prayer. “Hardly a week goes by that I do not hear from someone about the influence of contemplative prayer on their lives and the lives of those they touch,” she told The Catholic Post.

In addition to Sister Catherine, Sister Audrey is survived by sisters Colleen Regele, Anne Lyons, and Clarys Souter; brothers Thomas, James and David; many nieces and nephews; and her Benedictine Sisters. She was preceded in death by her parents and brothers Michael and Robert.