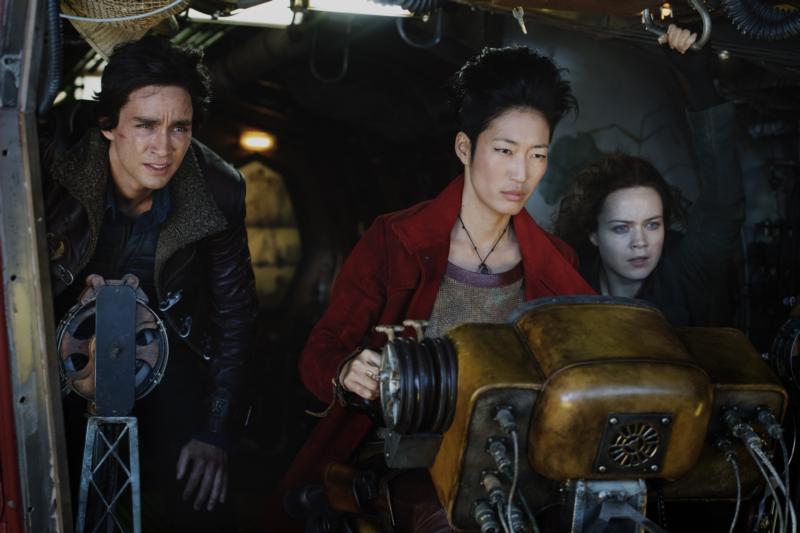 Visually impressive but dramatically sterile adventure set in a dystopian far future where huge mobile cities roam around battling one another for scarce resources.

Thrown together by chance, a previously contented citizen of locomotive London (Robert Sheehan) and a rebel warrior (Hera Hilmar) put aside their initial differences to fight the attempt of an influential archeologist (Hugo Weaving) to gain dominance for the British metropolis by reviving the doomsday armaments that long ago destroyed all civilization. The duo is eventually aided by a glamorous outlaw (Jihae) but stalked doggedly by an unstoppable human-android amalgam (Stephen Lang) unleashed by the villain.

Despite the appealing leads and the innovative gesture of featuring a heroine whose face is disfigured by scars, flat dialogue from screenwriters Fran Walsh, Philippa Boyens and Peter Jackson and an emphasis on special effects that marginalizes the human element leave director Christian Rivers’ screen version of Philip Reeve’s novel for young adults wanting. As a cautionary tale about the dangers of advanced weaponry with relatively few objectionable elements, it’s probably acceptable for older teens.

Much combat and other violence with some gore, a mild oath, a few scatological jokes, at least one crass term. The Catholic News Service classification is A-III — adults. The Motion Picture Association of America rating is PG-13 — parents strongly cautioned. Some material may be inappropriate for children under 13.