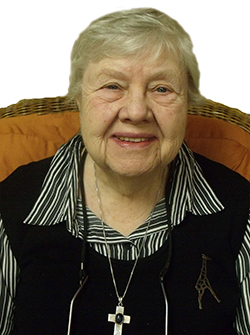 Visitation was scheduled at the Humility of Mary Center, 820 W. Central Park Ave., in Davenport, on Thursday, Dec. 6, opening with a rosary at 4 p.m. and concluding with a vigil service at 7 p.m.

The funeral Mass will be at 11 a.m. Friday, Dec. 7, also at the Humility of Mary Center.

Born on Oct. 25, 1932, in Bradford to James and Anna Dickman McKean, she entered the Congregation of the Humility of Mary in 1951, professing perpetual vows in 1954.

Sister Gretchen’s ministry was centered on education, and her early years in elementary school teaching included from 1959 to 1961 at St. Pius X in Rock Island. In addition to her teaching at Marycrest College, she was also a department chair for many years and was director of the Spirituality Center on campus from 1997 to 2002. She retired to the Humility of Mary Center in 2002 and had resided at the Bishop Drumm Care Center since 2014.

She served on the Davenport Diocesan Sisters Council and attended meetings of the National Assembly of Women  Religious as well as Call to Action.

She is survived by nieces, nephews, and the Sisters and associates of her religious community. Among those who preceded her in death were her parents and six siblings, including Father Benedict McKean, OSB.

Memorials may be made to the Congregation of the Humility of Mary at chmiowa.org.