WASHINGTON — Before he earned his doctorate in educational administration from Illinois State University and returned to Uganda, Father Julius Turyatoranwa often shared with parishioners his dream of building a school there. In doing so, he touched the hearts of the people of central Illinois.

Now they have “touched” that dream in a very special way. 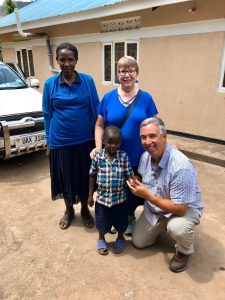 John and Kay Grillot meet Andrew, the 6-year-old they are sponsoring, and Fausta, his mother, during their September trip to Uganda. (Provided photo)

In September, John and Kay Grillot of St. Patrick Parish in Washington traveled to the East African nation to see the progress that has been made since Father Julius left last December. Their trip included meeting Andrew, the 6-year-old student they are sponsoring, and his mother, Fausta, as well as the principal and workers who are bringing to life the campus of St. Patrick Nursery and Primary School — Day and Boarding in Isingiro District. It is located about six miles from the city of Mbarara.

“There are two things that are amazing. Number one is that we’re building a boarding school for 500 children,” said John, who is president of the board of Building Hope in Kids-Uganda, the not-for-profit organization that is raising funds for the school. “The classroom building is two stories, 100 meters long. That’s more than a football field. It’s big.”

The second thing that amazes the couple is how much has been done since Father Julius was photographed on the roughly graded school site last New Year’s Eve, surrounded only by his vision of what was to come.

“We now have four major buildings and four small buildings built and we will be starting school in February,” John said.

The cost for Phase I was nearly $600,000, which has been raised over the last two and a half years, according to John Grillot, who retired in 2012 after working as an engineer at Caterpillar Inc. for 40 years.

What has kept costs in line is that much of the work is being done with materials brought to the construction site, with workers making the blocks for the walls and fabricating the window and door frames out of steel. 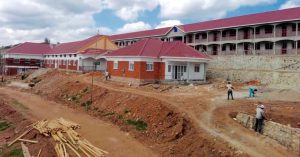 An overview of the campus shows the dining hall complex on the left, the administration building in the middle, and the classroom building in the background. (Provided photo)

“We focus on how good this will be for the children, not realizing that this is also a jobs project,” Kay Grillot told The Catholic Post. “The people have come from far away to work here. That’s been a huge factor in the excitement about the school and publicity about bringing children there.”

St. Patrick Nursery and Primary School will enroll children from 4 to 14, with the younger students attending during the day only. Initially students will be accepted from pre-kindergarten through Primary 5, which is about the same as fifth grade in the United States. A grade will be added each year as the students progress, eventually reaching eighth grade.

“Father wanted to go to at least fifth grade now so that within three years you will have graduates,” Kay explained. “He wants to have, fairly quickly, some solid test results and use that to draw more students. But we’re not prepared to have full enrollment yet.”

Phase II of construction will help by adding dormitories for girls and boys. A guest house is also included in the plans for this phase.

The projected cost is $550,000 and a recent challenge grant of $200,000 may make it possible to start construction sooner than they hoped. While details are still being worked out, Building Hope in Kids-Uganda would have until the end of April 2019 to raise the matching funds.

“We can do that. We will do that,” John said. “We’re gearing up and putting a game plan together.”

The Grillots acknowledged that people may have some concerns about sending money overseas and wonder how the funds are really being used. They shouldn’t worry, the couple said.

“Building Hope in Kids-Uganda is 100 percent volunteer,” John said. “We have no hired staff, no salaries. We have no offices, except for our own. We don’t own any computers. We use all our own stuff and pay for a lot of things out of our own pocket.”

Donations are deposited in a bank and then wired to a bank in Uganda.

“Father Julius is such a good steward of the money,” Kay said.

He is also grateful.

“We thank the people of central Illinois who have supported us with funds through our foundation, Building Hope in Kids-Uganda,” Father Julius told The Post is a recent email. “I appeal for more support for funds to erect the remaining structures and if you can sponsor a child at $50 per month — $600 a year — please come support us.

“We also appeal for prayers as we continue building ‘brick by brick,’” said Father Julius, who serves as the pastor of Christ the King Parish in Rukungiri, as well as superintendent of St. Patrick School. The parish has about 14,000 members and is approximately a 90-minute drive from the school.

He continues to recruit students and said half of them will need sponsors, while the other half can pay for themselves.

In addition to supporting the school, Building Hope in Kids-Uganda is designed to develop and support ongoing relationships, including with its sister school, St. Patrick in Washington. John Grillot said in the future the foundation hopes to organize mission trips so adults can travel to Uganda to meet the people and work with them.

For more information about the school, future phases of construction, and opportunities to help, visit buildinghopeinkids.org.

EAST PEORIA — The Knights of Columbus are holding a “Fish Fry for Father Julius” on Friday, Dec. 7, in the parish hall of St. Monica Church, 303 Campanile Drive. It will be served from 5:30 to 7 p.m.

In addition to the fish (all you can eat), the menu includes a baked potato, lettuce salad and rolls. The cost is $8 for adults and $4 for children. Hot dog plates will be available for $3.

The proceeds will be donated to Father Julius Turyatoranwa, former parochial vicar at St. Monica and St. Patrick in Washington, for the school he is building in Isingiro District, Uganda. The St. Patrick Nursery and Primary School — Day and Boarding will open with about 200 students in February. Fundraising continues for Phases II and III.