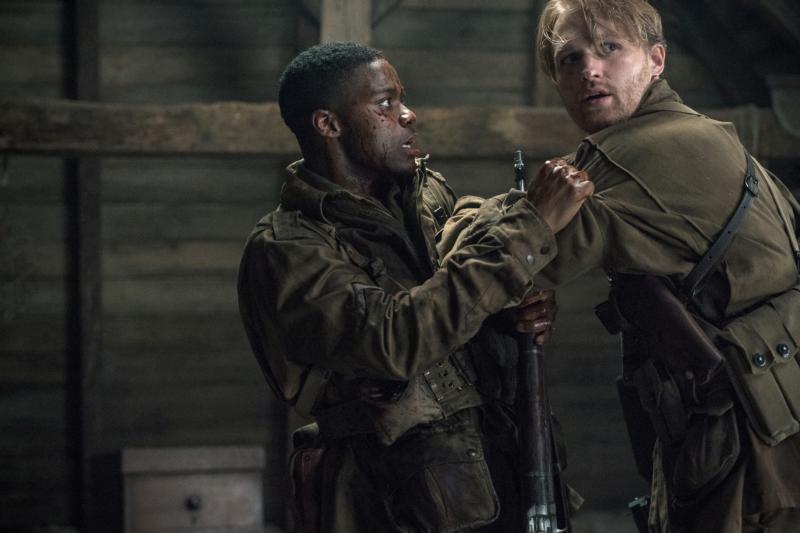 Jovan Adepo and Wyatt Russell star in a scene from the movie "Overlord." The Catholic News Service classification is L -- limited adult audience, films whose problematic content many adults would find troubling. (CNS/Paramount)

This weird, wild but surprisingly effective blend of war story and chiller from director Julius Avery is far too gory and gruesome for most moviegoers. Those with a taste for the macabre and a strong stomach can follow the exploits of a humane GI (Jovan Adepo) and his more ruthless commander (Wyatt Russell) as, on the eve of D-Day, they and a few comrades (most prominently John Magaro and Iain de Caestecker) survive being parachuted into France to take out a radio transmitter the Germans have placed on the steeple of a church.

Though vastly outnumbered by the occupiers (led by Pilou Asbaek), they gain the help of a courageous and wily local (Mathilde Ollivier) and press ahead. But they soon face a far different challenge after discovering that a Mengele-like doctor (Erich Redman) has been carrying out frightful experiments in the basement of the church aimed at creating a force of invincible zombie soldiers.

Amid the frequently hideous proceedings, screenwriters Billy Ray and Mark L. Smith explore the legitimacy of using brutal means to combat evil and implicitly portray Christianity both as a civilizing force and as the antithesis of the temporarily prevailing Nazi depravity.