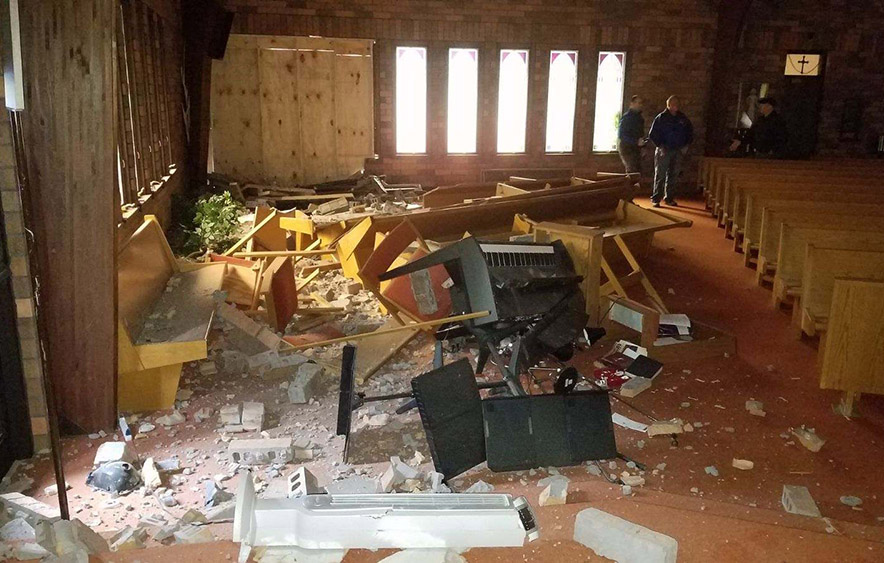 Plywood covers a hole created when a truck crashed into St. Maria Goretti Church in Coal Valley last Oct. 25, spraying bricks and mortar throughout the church and toppling pews and music equipment. (Photo by a St. Maria Goretti parishioner)

COAL VALLEY – St. Maria Goretti Church here was extensively damaged and has been temporarily closed after a vehicle crashed through its southwest wall the evening of Thursday, Oct. 25.

The driver, Joe Gotthardt, reportedly suffered a sudden medical condition prior to losing control of his truck, a Dodge Ram 2500. Gotthardt sustained minor injuries and was treated and released at a local hospital. No one was in the church at the time of the impact. 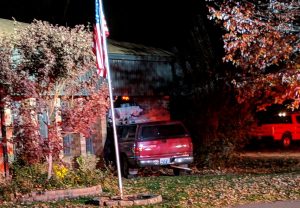 The parish’s two weekend Masses were moved to Mary, Our Lady of Peace Church in Orion for the two subsequent weekends. The Orion and Coal Valley faith communities are linked parishes with the same pastor, Father Anthony Ego.

But Father Ego told The Catholic Post on Nov. 6 that a structural analysis completed a day earlier determined that is is safe to host Masses in the parish hall adjacent to St. Maria Goretti Church while repairs are made. The Masses — at 4 p.m. on Saturday and 10 a.m. on Sunday — will be moved to the hall in Coal Valley starting this weekend.

The accident occurred shortly after 7:30 p.m. on Oct. 25. The truck crashed into the brick church, located at 210 E. 22nd Ave., breaking through the wall just to the left of the sanctuary and sending bricks flying, pews tumbling like dominoes, and toppling the electronic piano. A roof-supporting beam was dislodged.

The vehicle came to rest half in and half out of the church’s exterior wall.

“There was brick, mortar, sand, and rock everywhere” inside the church, said Father Ego, who described what he saw upon entering the church as “devastation.” Oil and gas soiled the carpet. The Blessed Sacrament was removed from the tabernacle as initial inspections began the evening of the crash.

As news reports spread, the parish took to the Internet, social media, and email to let parishioners know that St. Maria Goretti’s weekend Masses would be moved to Orion.

“Considering the short notice, we had a good showing of Coal Valley people,” said Father Ego.

St. Maria Goretti Church and Parish Hall in Coal Valley were built in 1984. (Photo from smgcv.org)

Asked what he told St. Maria Goretti parishioners at those first Masses, Father Ego said “most importantly, the driver of the truck is OK.”

He drew applause with his final comment on the incident: “I know this,” he said. “We will survive. We are going to make it.”

In a letter to parishioners posted on the parish website, Father Ego — who was assigned to the parishes in June — said sacrifices will be required from all “as we make this journey together.”

“We have all been affected and displaced,” Father Ego wrote. But he expressed confidence that “we have a strong faith community and together will step up to the plate and do what must be done.”

Among the first items on the to-do list is to prepare the parish hall as a worship space. Father Ego said it will be determined this week what sanctuary furnishings and sacred art pieces can be moved from the church. The altar and tabernacle will likely be moved, but probably not the large pulpit. About 150 chairs will be set up for the assembly.

Parish meetings that previously took place in the hall will be moved to the rectory.

The length of time before the parish can return to the church will be determined by the course of action to repair the roof-supporting beam, which has been temporarily secured. It will likely be several months.

St. Maria Goretti Parish was founded as a mission of St. Ambrose Parish in Milan in 1965. It became a parish in 1972 and the present church and hall were dedicated in 1984. The parish embraces more than 300 households.