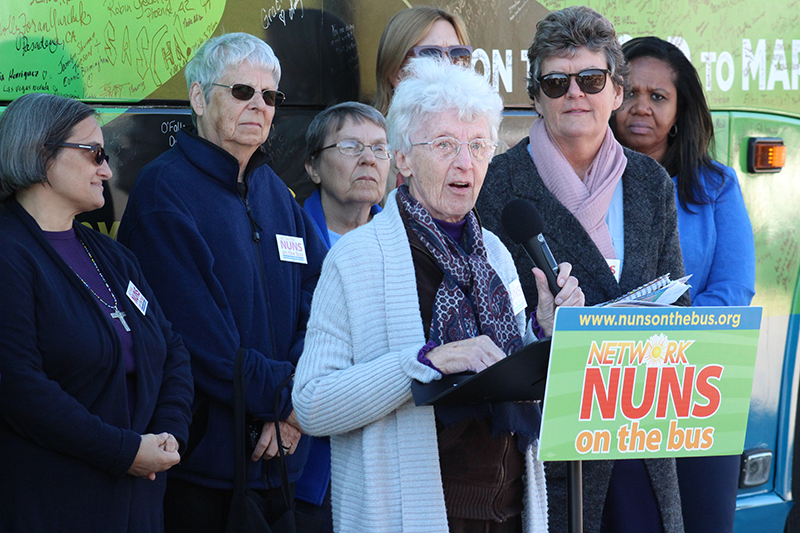 Franciscan Sister Gwen Hennessey encouraged people to "get involved" and build the reign of God in whatever area we are in" as part of the Nuns on the Bus "Tax Justice Truth Tour" Oct. 18 in Peoria. The Catholic Post/Jennifer Willems

Seeing a brightly colored bus pull up in front of Heartland Health Services on Peoria’s East Bluff isn’t something that happens every day, but curiosity turned to gratitude as the “Nuns on the Bus” declared their intention to “show up, stand up, and demonstrate our concern for others” as a result of the Tax Cuts and Jobs Act of 2017.

The Oct. 18 site visit and rally were among the 54 events that brought women religious from around the country to 44 cities across 21 states. The coast-to-coast “Tax Justice Truth Tour” is being sponsored by Network, which “educates, organizes and lobbies for economic and social transformation.”

This is the sixth national Nuns on the Bus tour in seven years and during the rally, speakers expressed their concern for the impact the 2017 tax bill is having on working families, the economy and access to health care. 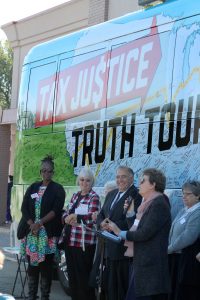 Signatures of people at stops along the way can be seen on the bus used during the national tour. The Catholic Post/Jennifer Willems

“We may not be experiencing the same pain and suffering as some of our brothers and sisters, but the community that Jesus calls us to live is that we do care about those people and we do try to lift those people up to the levels we’re at. We can expect others to bring us up when we need help,” said Sister Mary Ellen Lacy, DC, a former nursing home administrator who is now part of Network’s grassroots mobilization team.

She said when Network organized the first Nuns on the Bus tour in 2012, the goal was to look for “reasonable revenues for responsible programs.”

“We were holding up programs that served impoverished people, that allowed people to live as God intended them to live,” she said.

“This time we’re coming out to hold our politicians accountable for defunding these programs, for threats to defund these programs,” Sister Mary Ellen told those who sat or stood by the side of the bus. “We want to demand continued funding for these reasonable programs because you see that these programs do so much good.”

STANDING UP FOR OTHERS

Heartland Health Services is a federally qualified health center with seven locations. Also speaking at the rally were Dr. Gregg Stoner, chief medical officer, and Sally Snyder, who chairs the health center’s board. The 10 Nuns on the Bus had an hourlong roundtable discussion with them and some of their community partners before the rally began.

The tour, which began Oct. 8 in California and was due to end Nov. 2 at Mar-A-Lago, President Donald Trump’s home in Florida, included stops in legislative districts where representatives voted for the tax bill.

The message? “We want to care for each other and we all do better when we’re all together,” Sister Mary Ellen said.

Nuns on the Bus, which had 35 women religious taking part, 10 at a time, is nonpartisan. They hope to inspire people to vote, however.

Sister Mary Ellen told The Catholic Post she was inspired by the response they’ve been getting.

“The people who are here are standing up for others. They’re community-minded people,” Sister Mary Ellen said. “It’s an exciting trip for us. We’re seeing the goodness in people and we’re seeing people come together and people owning their duty to one another.”

“All of us have to get involved and build the reign of God in whatever area we are in,” said Sister Gwen Hennessey, a member of the Sisters of St. Francis of the Holy Family of Sioux City, Iowa.