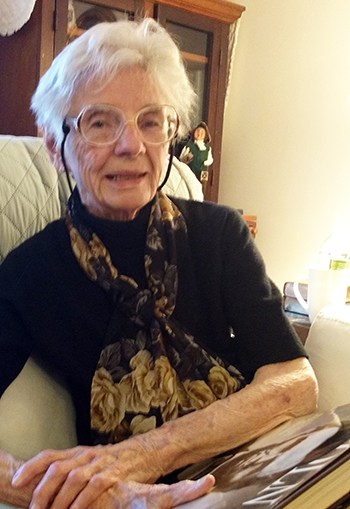 The first words from Albina Aspell in a recent lengthy interview with the former editor and publisher of The Catholic Post may sound difficult to believe coming from someone who is 91 and enduring the progression of Parkinson’s disease.

But then maybe you don’t know the woman most call “Al.” Let’s fix that.

Al was on staff of The Catholic Post for 21 years, becoming its first lay editor in 1982 and first lay publisher 10 years later. She is a pioneer for women in the Catholic press and a past president of the Catholic Press Association of the United States and Canada. In that role, she addressed Pope John Paul II and the full assembly of the World Synod of Bishops at the Vatican in 1987. 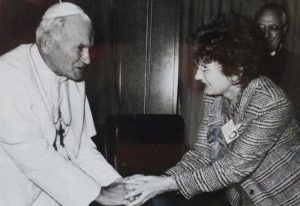 Albina Aspell greets Pope John Paul II in 1987 while at the Vatican to address the World Synod of Bishops as president of the Catholic Press Association. CNS file photo/Arturo Mari

Raised in Cleveland by parents who emigrated from Slovenia, Al made a living with words even though she only began learning English upon entering grade school. Soon she was writing for the Paul Revere School Lantern.  She continued to hone her skills with the Nathan Hale Junior High Patriot, then the John Adams High School Journal.

“A week after graduating I was working for the Cleveland News,” she recalls. While Al would later take six years of evening college classes, her journalism education was most provided by “the men on the newsroom copy desk. The older reporters taught the younger ones. You can’t get an education like that anymore.”

She married, moved to Peoria with her late husband Bill, and raised three children before being hired by Msgr. Robert G. Peters as features editor for The Catholic Post.

“That was the beginning,” she now says, recalling Msgr. Peters’ kindness.

The interview is interrupted by the sound of a Bing Crosby tune suddenly filling Al’s studio apartment with music at Peoria’s Independence Village.

“My 2 o’clock pill call. Isn’t that super?” she says of the technological wonder of a voice-controlled speaker. Seven times a day, her “Alexa” plays music to remind her to take a variety of medications, including three kinds for Parkinson’s. At 2 a.m. the previous night, she was awakened by “Don’t Cry for Me Argentina” from “Evita.”

Her progressive neurological disease is a thief that has taken her senses of smell and taste. It has complicated other vision issues so that her great love of reading is nearly impossible. Her hand coordination is literally slipping away.

“Every time I pick something up, I spill it,” she says. “And if I spill it, I can’t see where it went because I’m too blind. So I’m flailing away with a paper towel.” Al has lost most of her mobility, and the Parkinson’s and medications have her on a rollercoaster of highs and lows, feeling great one hour and then dipping to “when you think you’re going to be dead in the next 30 minutes.”

The best ever stage in life, Al?

“The best ever,” she repeats.

“ALONE WITH MY GOD”

It is here that this reporter simply needs to get out of the way and let the wordsmith explain it.

“When I was little, in my faith I was always a beggar. Begging God to do this favor, worried about one thing, afraid of another. Now all I do is thank him.

“Prayer is not so much words anymore. It’s an awareness that God is here and He’s not going to let you go. God is an ever-loving Presence and you never lose track of that after a while. That’s why nothing really bothers me so much now.”

“The faith life increases. Prayer is not so much words anymore. It’s an awareness that God is here and He’s not going to let you go. God is an ever-loving Presence and you never lose track of that after a while. That’s why nothing really bothers me so much now.

“It used to be hard to pray, to find the time to pick up the prayer book and really isolate yourself. Now I have the quiet, the privilege of being alone with my God.”

The late Bishop John B. Franz once referred to old age as “the vestibule of everlasting life.” Al agrees.

“This is definitely it. You have a different perspective. It’s like somebody put new lenses into your eyeglasses. You’ve got to change your view.”

And Al views almost everything now through a lens of gratitude, from the “leap of faith” her parents took coming to America to the blessings of her family and career.

“When I look back there wasn’t a thing I ever expected,” she said. “God just knows. Now I can’t thank him enough.”

She is especially grateful for those who check up on her regularly through OSF Palliative Care, which recognizes “we’re body and soul” and tends to both aspects. Nurses check on her health, and she especially looks forward to visits from her assigned chaplain — a Disciples of Christ clergyman who not only discusses deep issues with her, but shares laughter and even programs her “Alexa.”

While Al can no longer travel to Mass, she is brought weekly Holy Communion by Ron and Maureen Thorne of St. Vincent de Paul Parish. On Wednesdays, Rose Hunsader from the parish also brings the Eucharist and prays the rosary.

She looks forward to daily calls from her children and visits from them and her four grandchildren.

“And there are so many projects” Al still hopes to complete, ranging from writing a book on the Catholic cousins of Abraham Lincoln to establishing a low-wattage radio station for residents of her retirement home. She sees it as one way to invite the residents to share their “wealth of oral history.”

Al is well aware that the God she so loves will one day call her home. “I’m not afraid of dying at all. Not one whit,” she says.

Asked what she thinks heaven will be like, she says: “Prepare to be surprised.”