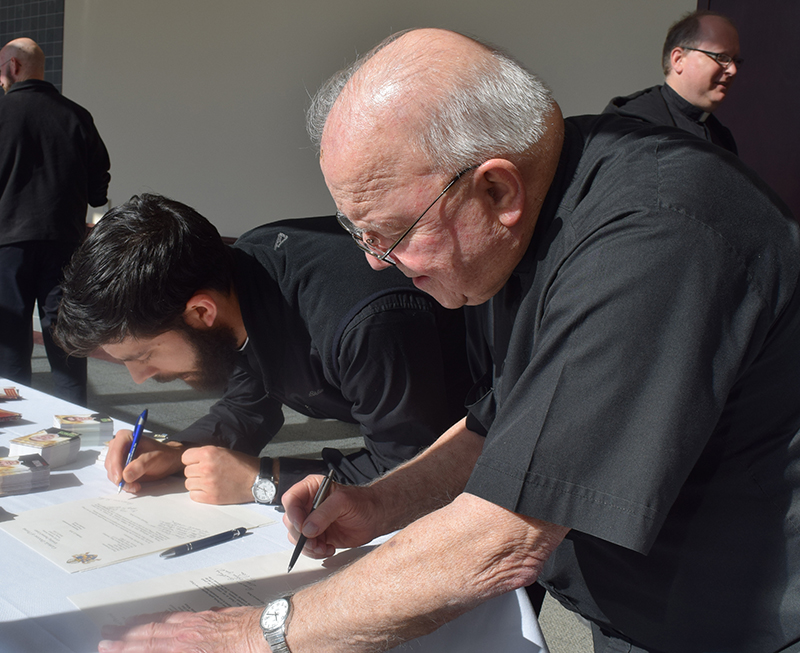 Msgr. Ernie Pizzamiglio, a senior priest from Galesburg, and Father Michael Pica, parochial vicar at St. Patrick Church of Merna in Bloomington and St. Mary Parish, Downs, sign letters promising prayers and support to diocesan seminarians "during these challenging times for the Catholic Church in our country." (The Catholic Post/Tom Dermody)

When nearly 100 priests of the Diocese of Peoria gathered for a two-day assembly in Peoria this week, they found a way to express their solidarity with seminarians “during these challenging times for the Catholic Church in our country.”

As Priest Assembly Days opened at the Spalding Pastoral Center in Peoria on Oct. 23, Msgr. Jason Gray invited those present to sign letters to be sent to diocesan seminarians studying at Mount Saint Mary’s Seminary in Emmitsburg, Maryland, and Immaculate Heart of Mary Seminary in Winona, Minnesota. 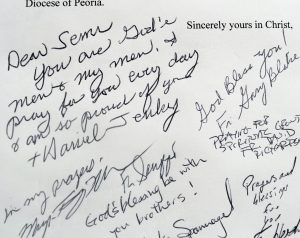 Among those adding notes to their signatures on the letter to seminarians was Bishop Daniel R. Jenky, CSC.

Msgr. Gray, who is chairman of the Continuing Education of Clergy committee, explained that the idea for the letters surfaced during a recent meeting of the Presbyteral Council.

The letters read as follows:

“As we, your brothers in the Presbyterate of the Diocese of Peoria, gather together for our Clergy Assembly Days, we promise you our prayers and support in your seminarian training.

“During these challenging times for the Catholic Church in our country, we are greatly encouraged by your commitment to discerning a priestly vocation. We look forward to the day on which, God willing, you are able to join the wonderful fraternity of the Presbyterate of the Diocese of Peoria.”

Some, including Bishop Daniel R. Jenky, CSC, added brief notes in addition to their signatures.

Priest Assembly Days featured presentations by Father Sean Kilcawley, director of the Office of Family Life in the Diocese of Lincoln, Nebraska; breakout sessions on a variety of topics; Mass with Bishop Jenky; and various prayer and social opportunities. Further coverage will appear in the next issue of The Catholic Post.