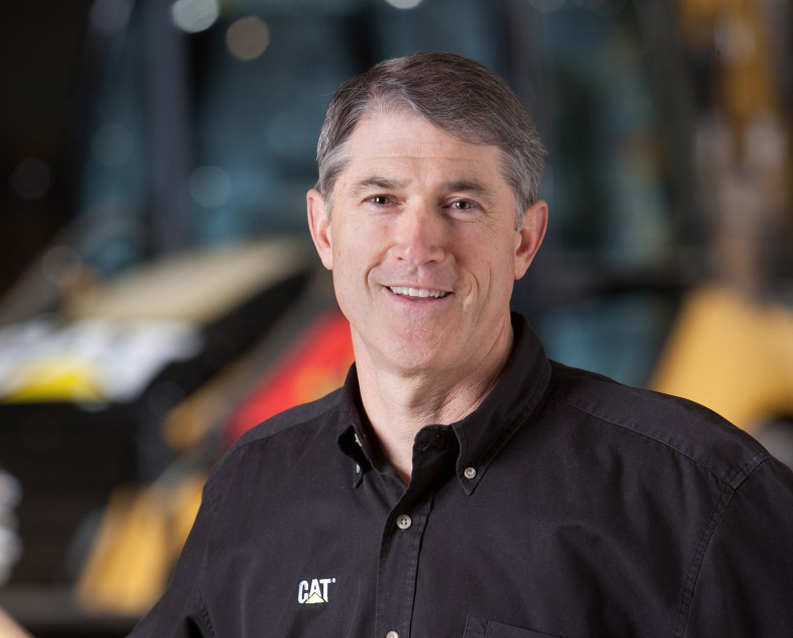 Ed Rapp, former group president at Caterpillar in Peoria, said that even though being diagnosed with ALS meant he couldn't finish out his career at the company he gave 37 years to, being able to make a difference at Caterpillar and in the world of ALS makes his a happy story. (Provided photo)

Ed Rapp is reminded every day, with every step he takes, that ALS is a part of his life. He prefers not to focus on the fear of what is to come, however.

“I remind audiences that none of us is going to get out of this alive,” he recently told The Catholic Post during an interview via FaceTime. “You may argue that my path is a little bit better defined, but we’re all going to get managed or measured by the contributions we make while we’re here. So I stay more focused on what I can do with the disease as opposed to what the disease is doing to me.”

One of the things the former Caterpillar group president has done since being diagnosed with amyotrophic lateral sclerosis (Lou Gehrig’s disease) in 2015 and retiring in 2016, is work with OSF HealthCare Foundation to establish the Ed and Ann Rapp Family Endowment. This month, the Rapps made an additional gift of $1 million. 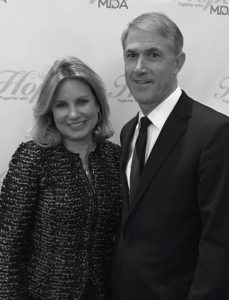 “If I look at the world of ALS and if I looked at the technologies that are used all the way from diagnosis to caregiving, in many cases it’s antiquated technology,” he explained. “My days at Caterpillar taught me that great innovation comes from great collaboration. So the real intent of the gift is to bring engineers and doctors together.”

Engineers are wonderful problem solvers who can use that skill to tackle the challenges faced by patients living with progressive neurological diseases like ALS and their doctors, Rapp said.

He also cited the Jump Trading Simulation and Education Center at OSF HealthCare Saint Francis Medical Center in Peoria, and the University of Illinois College of Engineering, as strong resources in central Illinois. Another key part of the collaboration he seeks is medical professionals like Dr. Chris Zallek, a neuromuscular disorders specialist with OSF Illinois Neurological Institute in Peoria, where Rapp volunteered at one time.

“So I think the endowment is focused on bringing some very unique capabilities together. What they can innovate and do only time will tell,” he said. “But I think they are uniquely positioned to make a difference.”

My days at Caterpillar taught me that great innovation comes from great collaboration. So the real intent of the gift is to bring engineers and doctors together.

“I just don’t think we can imagine what technologies can be brought to bear on people who suffer from the disease with the intent of not only earlier diagnosis and ease of care, but also giving them a better quality of life while they struggle with the disease,” he said.

Rapp noted that communication is one of the greatest challenges for people with ALS, since they will eventually lose the ability to speak. Right now there is eye-tracking software that types as a person’s gaze rests on one letter at a time.

“I’ve just got to believe that technology will evolve that when you think it, it will be able to be translated and spoken,” he said. “I don’t know when that’s going to occur, but I go back to the fax machine and FaceTime.”

Other assistive technologies include improving mobility by continuing to develop wheelchairs, and developing better forms of manipulation that will allow those with ALS to do everyday tasks, such as turn on the lights or the TV or navigate the internet, Rapp said.

“One of the things they struggle with the most is the loss of independence, where they have to rely on someone else,” he told The Post. “I just think there are technologies out there where that doesn’t have to be the case.”

The Rapps have relocated to North Carolina, where a big part of his therapy is the time he spends with his grandsons Cole, Eli and Leo. In true central Illinois fashion, he refers to them as “da boys.”

The ALS, which affected his left leg first, can be felt in both legs now and he typically walks with a cane or two walking sticks. The good news is that neither his breathing capacity nor overall strength have changed.

“The most critical one for an ALS patient is breathing capacity because that’s what eventually gets you,” Rapp explained. “So there’s not a day that goes by that I don’t consider myself lucky.”

He quickly adds that he’s working hard to stay lucky by pursuing traditional care through Johns Hopkins in Maryland, and functional medicine, which monitors issues like toxicity and supplements. He has eliminated gluten, dairy and processed sugar from his diet.

The cornerstone, however, remains his strong commitment to his faith. That takes the form of prayers supported by affirmations.

“It’s never wavered,” Rapp said. “A lot of people ask me, ‘Have you lashed out? Have you gotten angry?’ I don’t know why but I’ve never gone there.

When asked what he needs, Rapp asked for continued prayers for him and his family.

“As I pray to the good Lord, I pray powered by prayers from around the world. I continue to heal. I believe those prayers make a huge difference,” he said.

While he has a new home and a new parish family, Rapp said he still considers Peoria and St. Jude Parish there to be “a big part of who I am.”

“We’re all products of the environment we’re raised in. A lot of my growth and development came from that foundation,” he said. “That’s something I always want people to understand.”

Rapp added that supporting their “hometowns” of Raleigh, North Carolina, and Peoria remains important to the couple. They are actively engaged in the Walk to Defeat ALS in both cities and he returned to Peoria in September to participate with Team Rapp.

“In those local communities there are a lot of people that are suffering from the disease and that are using the services of those local chapters (of the ALS Association), and we feel an obligation to support them,” he said, noting that getting involved in the walks is a wonderful way for people to lend their support.

Rapp acknowledged that this is not the path he would have chosen. Even so, he has still been able to accomplish milestones he has set for himself, such as walking his daughters down the aisle at their weddings — one last year and the other a few weeks ago — and having the father-daughter dance with them.

Future milestones include growing old with Ann, his bride of 35 years, and teaching his grandchildren to play golf. Some people have told him that goal may be lofty, but he chooses to retain his strong beliefs and visualize where he wants to be.

He knows that people wonder how he’s doing and he appreciates the concern.

“Through the strength of a strong faith, a wonderful family, and an incredible support network of friends and others, we’re doing just fine,” Rapp said.

EDITOR’S NOTE: Ed Rapp continues to provide information about living with ALS and ways to get involved in finding a cure at staystrongvsals.com/updates.