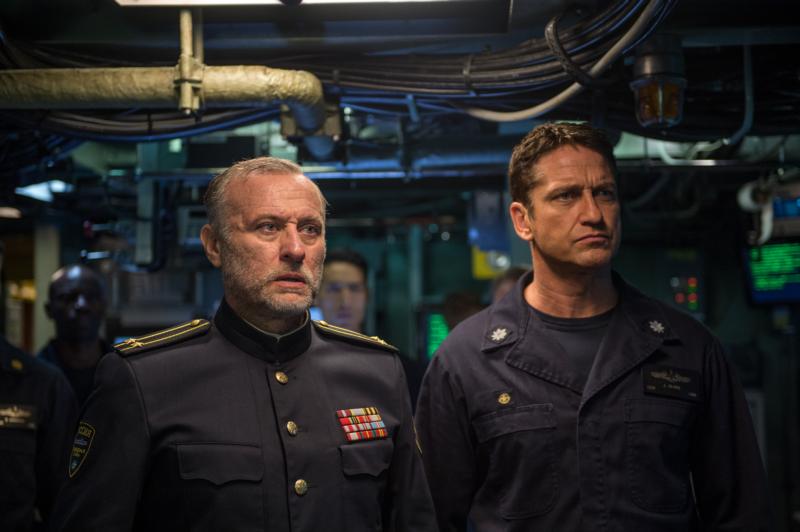 Michael Nyqvist and Gerard Butler star in a scene from the movie "Hunter Killer." The Catholic News Service classification is A-III -- adults. (CNS/Lionsgate)

Far-fetched but reasonably entertaining military potboiler puts scowling macho man Gerard Butler at the helm of a U.S. submarine during a potentially war-triggering crisis in relations with Russia. To avert a nuclear holocaust, he must not only do some fancy maneuvering but gain the cooperation of a Russian counterpart (Michael Nyqvist), despite the numerous objections to this apparently collaborationist plan of his conventionally minded executive officer (Carter MacIntyre). Back on land, the skipper gets support from a level-headed admiral (Common) and an equally sensible presidential security adviser (Linda Cardellini) who together also dispatch a team of Navy SEALs (led by Toby Stephens) to the Kola Peninsula to see what’s going on at Russia’s naval headquarters.

Director Donovan Marsh’s screen version of George Wallace and Don Keith’s 2012 novel “Firing Point,” which also features Gary Oldman chewing the scenery as the fuming, trigger-happy chairman of the Joint Chiefs of Staff, is crowded, somewhat laborious and hard to swallow. But, while it includes too much bloodletting and sailor slang for youngsters, the film ultimately promotes the need to take chances for peace.