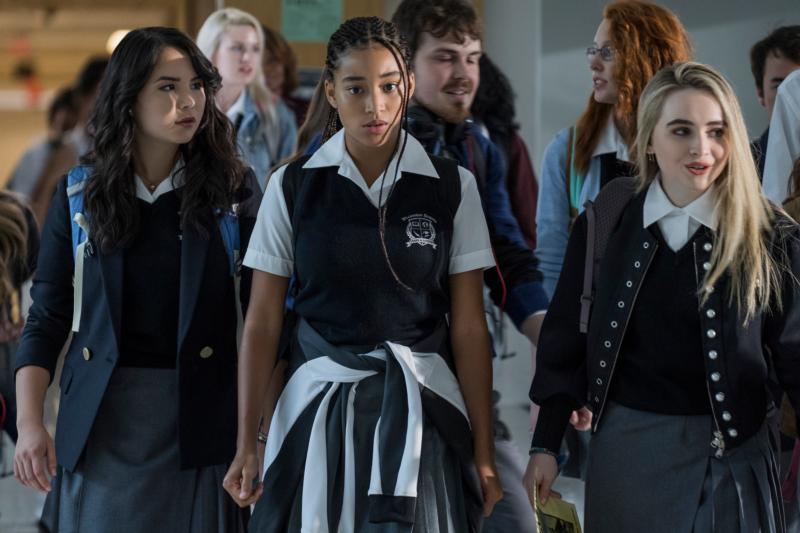 Megan Lawless, Amandla Stenberg and Sabrina Carpenter star in a scene from the movie "The Hate U Give." The Catholic News Service classification is A-III -- adults. (CNS/Fox)

An African-American teen (Amandla Stenberg) divides her time between her mostly black working-class neighborhood and the predominantly white private school she attends, adjusting her personality and behavior to suit each environment. But her uneasy equilibrium is thrown off balance when she witnesses the shooting of a childhood friend (Algee Smith) by a white police officer (Drew Starkey), an event that affects her relationship with one of her two best pals (Sabrina Carpenter) and with her boyfriend (K.J. Apa), both of them white. As an activist (Issa Rae) urges her to go public, a move that would put her at odds with the local drug kingpin (Anthony Mackie), for whom the dead lad was working, she looks to her wise parents (Russell Hornsby and Regina Hall) for guidance.

Although passionate in tone, the film maintains credibility by its evenhandedness and ultimately points toward a solution to the problems it portrays that viewers committed to Gospel morality will easily endorse.

Brief graphic violence with some gore, nonlethal clashes, a narcotics theme, a scene of urination, numerous mild oaths, at least one use of the F-word, pervasive crude and crass language. The Catholic News Service classification is A-III — adults. The Motion Picture Association of America rating is PG-13 — parents strongly cautioned. Some material may be inappropriate for children under 13.