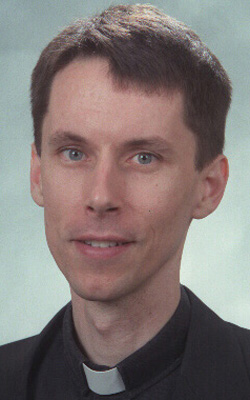 A funeral Mass will be offered at 10:30 a.m. on Friday, Oct. 19, at St. Mark Church in Peoria for Father James Edward King, a former pastor of parishes in Creve Coeur and East Moline who also served in Hispanic ministry throughout the Diocese of Peoria.

Msgr. Brian Brownsey will be principal celebrant of the funeral Mass and Father Steven Loftus will be homilist. Bishop Daniel R. Jenky, CSC, will be in choro. Burial will follow at St. Mary’s Cemetery in West Peoria.

Born in Peoria on Dec. 8, 1962, to Edward and Mary Killian King, he was a graduate of St. Mark School and the Academy of Our Lady/Spalding Institute, both in Peoria, and the University of Notre Dame, where he majored in the program of liberal studies.

After graduation from Notre Dame, he spent two years in Ponce, Puerto Rico, working with the poor and becoming fluent in Spanish.

It was during his time in Puerto Rico that he discerned and answered God’s call to become a priest. He attended Mount St. Mary’s Seminary in Emmitsburg, Maryland, receiving master’s degrees in divinity and theology.

He was ordained a priest of the Diocese of Peoria on May 23, 1992, at St. Mary’s Cathedral in Peoria.

Father King’s first assignments were as parochial vicar for three years at Holy Cross Parish, Mendota, followed by one year at St. Mary Parish, Pontiac. From 1996 to 2000, he was diocesan coordinator of Hispanic ministry, while also serving as pastor of Sacre Coeur Parish, Creve Coeur, and from 1997 to 2001 in Hispanic ministry at St. Mary’s Cathedral, Peoria.

Father King was a frequent contributor to The Catholic Post, including a regular column during the Year of Faith in 2013. He was an Oblate of the Brothers of St. John in Princeville, and had a special devotion to the Missionaries of Charity, founded by St. Mother Teresa. In his life, Father King emulated her directive to “do small things with great love.”

He is survived by his parents; two sisters, Maria (John) Carroll of West Peoria and Theresa (Dwight) Atchley of Oak Park; two brothers, Joseph of Peoria and Michael (Katherine) of Lake Zurich; and six nieces and nephews.

Memorials may be made to Haitian Hearts or the Father James King Scholarship at St. Mark School.

Wright & Salmon Mortuary in Peoria is in charge of arrangements.