Galesburg Life Chain a prayerful, public witness and ‘the right thing to do’ 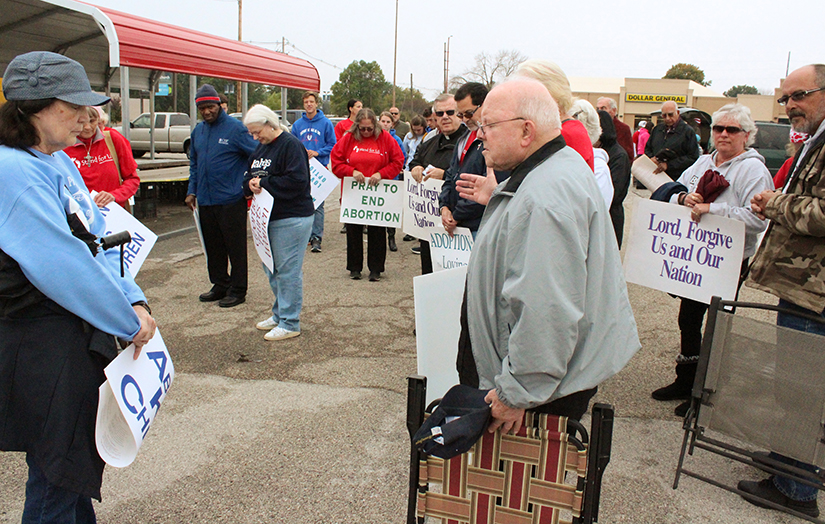 Msgr. Ernest Pizzamiglio offers a prayer before the Life Chain in Galesburg began on Oct. 7. He would then take his sign and sit among other participants at the intersection of Henderson and Fremont streets. The Catholic Post/Jennifer Willems

GALESBURG — Prayers, smiles and signs proclaiming Jesus’ love and forgiveness and the sanctity of human life greeted motorists driving through the intersection of Henderson and Fremont streets here last Sunday as dozens of pro-life advocates participated in Life Chain.

The peaceful, prayerful witness is held on the first Sunday of October — known as Respect Life Sunday — in hundreds of communities around North America, including several throughout the Diocese of Peoria. In Galesburg, Life Chain is coordinated by Knox County Right to Life, and several of the organization’s red shirts could be seen beneath sweaters and jackets.

After lining the busy intersection for an hour, many of the participants went to nearby Colonial Baptist Church for a prayer rally. Originally scheduled to take place outside, the service was moved into the church at the invitation of Pastor Darrell Grimm due to the wet grass and continuing chance of rain.

“RIGHT THING TO DO” 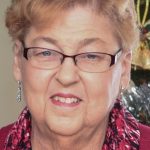 The Galesburg Life Chain was dedicated to the memory of Carolyn Feirtag, “a dedicated local pro-lifer,” who died on Oct. 4. A member of Knox County Right to Life and First Church of God, she also volunteered at the Women’s Pregnancy Center, all in Galesburg.

Leading the group in prayer before Life Chain began was Msgr. Ernest Pizzamiglio, a senior priest of the Diocese of Peoria. Then he walked to Henderson Street and sat in chair while holding a sign that said “Jesus Forgives and Heals.”

Gunther and Andrea Kreps of Immaculate Heart of Mary Parish came to Life Chain with their daughter, Annabel, because “It’s the right thing to do,” Gunther said.

“There’s so much debate in the country right now,” Andrea added. “It’s important to stand here and let people know that just because a law is a law it doesn’t make it right.” 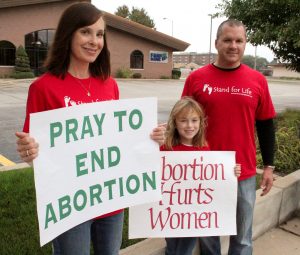 Andrea and Gunther Kreps of Immaculate Heart of Mary Parish in Galesburg brought their daughter, Annabel, to Life Chain. The Catholic Post/Jennifer Willems

“People need more education and knowledge about what abortion is,” said Midge Wade, also a member of Immaculate Heart of Mary. “There’s a lot of untruth out there. . . . If one person goes home and looks it up, then I’ve done my job here.”

Phil Steele of St. John in Viola made the trip for another reason.

“If this affects the life of one child, to save them from abortion, it will be worth it,” he said.

In her remarks at the prayer rally, Mary Norton, vice president of Knox County Right to Life and a teacher at Costa Catholic Academy in Galesburg, thanked those who came but said she wished even more were present.

“Can we afford to be lukewarm, especially now,” she asked. “The tide is turning.”

Finding that millennials are very pro-life, abortion advocates are running scared, Norton said, adding that the Planned Parenthood facility in Bettendorf, Iowa, has closed and the building is now occupied by the pro-life Women’s Choice Center.

She encouraged people to pray for abortion workers and “those who are pushing abortion on America,” as well as the unborn.

“We need to pray to end this division in our country so we can begin to heal and people can focus on real health care for women in crisis,” she said.

Quoting Micah 6:8, Norton said people can “act justly” by voting, which is not only a privilege but a duty and responsibility, and “love tenderly” by helping those in need, “giving with joy because you see Jesus in them.” As they “walk humbly with God,” she said, they need to remember that “The victory is God’s — not yours, not mine.”