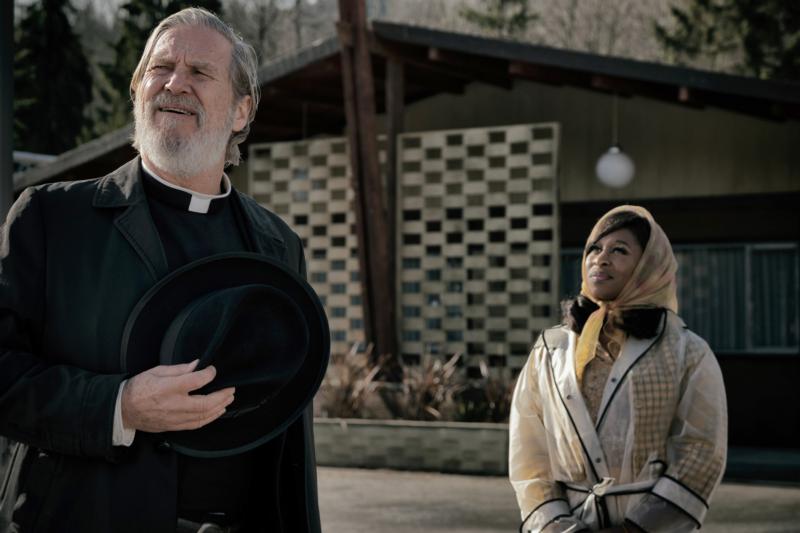 Jeff Bridges and Cynthia Erivo star in a scene from the movie "Bad Times at the El Royale." The Catholic News Service classification is L -- limited adult audience, films whose problematic content many adults would find troubling.(CNS/Fox)

Religion in general and Catholicism in particular are central to this intense, challenging drama from writer-director Drew Goddard.

In 1969, a strange array of guests checks into the past-its-prime hotel of the title which straddles the Nevada-California state line. They include a mild-mannered priest (an enthralling Jeff Bridges), a hard-edged hippie (Dakota Johnson), a glib traveling salesman (Jon Hamm) and a reserved soul singer (Cynthia Erivo). Secrets, false identities and a trove of stolen cash are mixed into a complex story that eventually also involves the hostelry’s timid manager (Lewis Pullman), a Charles Manson-like cult leader (Chris Hemsworth) and one of the latter’s young followers (Cailee Spaeny).

Sophisticated but gritty, the film’s basic stance is humane and its attitude toward faith serious and refreshingly respectful for a mainstream Hollywood production, albeit Goddard’s oblique approach to the subject may not be to every believer’s taste. Offbeat and ambitious fare for grown viewers willing to grapple with some exacting material.

Considerable violence with gore, glimpses of distant full nudity, mature themes including the sexual abuse of a minor, a couple of blasphemous expressions, a few uses of profanity, much rough and crude language. The Catholic News Service classification is L — limited adult audience, films whose problematic content many adults would find troubling. The Motion Picture Association of America rating is R — restricted. Under 17 requires accompanying parent or adult guardian.