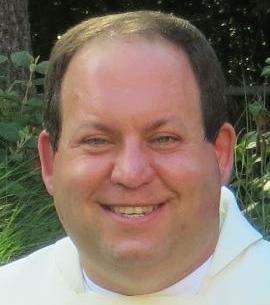 A Mass of Christian Burial will be celebrated at 11 a.m. on Wednesday, Oct. 10, at Holy Family Church in Peoria for Father Michael J. Glastetter, OFM Conv., a native of Holy Family Parish and its former pastor.

Father Michael died unexpectedly on Sept. 30, 2018, in Milwaukee, Wisconsin, where had served as rector and pastor of the Basilica of St. Josaphat since 2010. He was 47.

Born in Peoria on Oct. 17, 1970, to Calvin and Jacqueline (Crawford) Glastetter, he attended Holy Family and Father John Sweeney elementary schools and was a graduate of the Academy of Our Lady/Spalding Institute, all in Peoria.

He earned a bachelor of arts degree in theology from the University of Notre Dame in 1992.

Father Michael first sensed a call to the Franciscan Order after the Conventual Franciscans assumed responsibility for his family’s parish of Holy Family, Peoria, in 1978. He entered the community’s postulancy program in Chicago in 1992 and later moved to the friars’ novitiate in Staten Island, New York, professing first vows on Aug. 8, 1995, at Our Lady of Fatima Friary, Marytown.

He professed solemn vows at St. Anthony of Padua Church in Rockford and, after completing studies at Catholic Theological Union in Chicago, was ordained a transitional deacon on Sept. 12, 1998, at Holy Family Church in Peoria. Father Michael was ordained to the priesthood on May 8, 1999, at the Basilica of St. Josaphat in Milwaukee, which he would serve as parochial vicar for the next six years.

In 2005, Father Michael was named pastor of his home parish of Holy Family, Peoria. His five years of leadership included the complete rebuilding of the parish’s friary following a fire.

In 2010, he returned to St. Josaphat as rector and pastor. He would serve there until his death.

Father Michael was preceded in death by his father, Cal. He is survived by his mother, Jackie; a younger brother, Dennis (Heidi) Glastetter; three nephews and one niece.

Memorials may be made to the St. Josaphat Basilica Foundation in Milwaukee or the Province of St. Bonaventure Education Fund in Chicago.