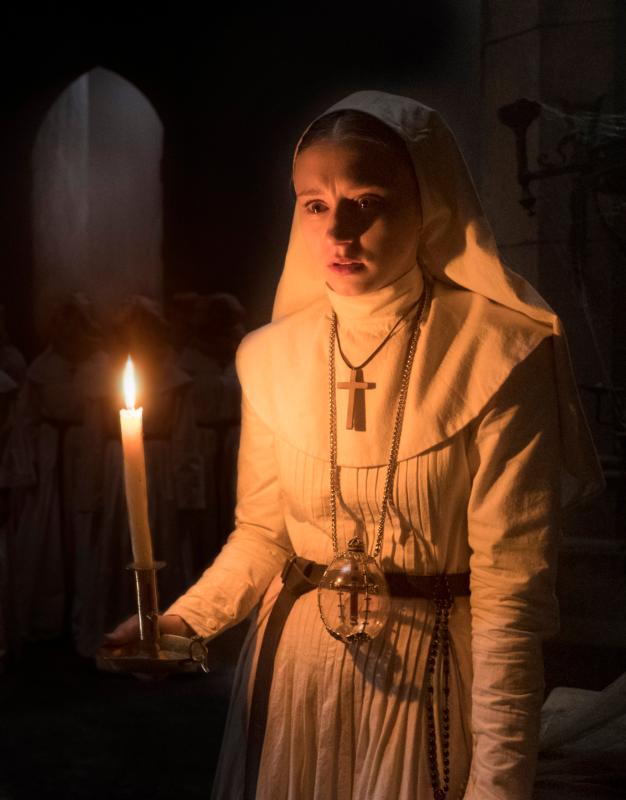 Taissa Farmiga stars in a scene from the movie "The Nun." The Catholic News Service classification is L -- limited adult audience, films whose problematic content many adults would find troubling. (CNS/Warner Bros.)

Made with a big budget, this fifth film in “The Conjuring” franchise pulls out all the stops in an attempt to rank as the “That’s Entertainment!” of Catholic-themed horror films. But a surfeit of questionable elements, including the tasteless treatment of a relic deserving the deepest possible reverence, makes this inappropriate for many.

A creepy white-faced demon nun (Bonnie Aarons) skitters through catacomb tunnels and pops out of the darkness in an ancient, sprawling Romanian abbey for a nice series of jump-scares. A priest (Damian Birchir) and, unlikely as it seems, a cheerful novice (Taissa Farmiga) are dispatched by Vatican officials to investigate. The remainder of the movie consists of the familiar Catholic shtick of Ed and Lorraine Warren, the self-styled lay exorcism “authorities” of decades ago, lifted, by director Corin Hardy and screenwriter Gary Dauberman, to the heights of the old-time Hammer Studios horror outings.

Navigating the close boundary line between sacred and profane, sometimes without success, the movie is likely to make grown viewers of faith slightly uncomfortable, to say the least. As for young and impressionable moviegoers, they should steer clear altogether.

Occult themes, the misguided use of a sacred object, a scene of suicide, some physical violence and gore, a single rough term. The Catholic News Service classification is L — limited adult audience, films whose problematic content many adults would find troubling. The Motion Picture Association of America rating is R — restricted. Under 17 requires accompanying parent or adult guardian.