‘We will arise’ from these difficult days, Bishop Jenky assures at Irish festival Mass 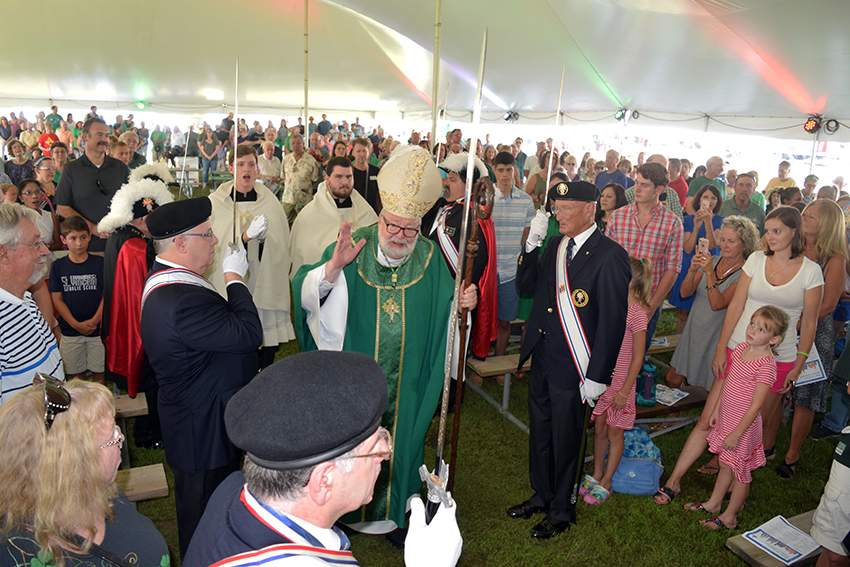 As he passes through a Knights of Columbus Honor Guard in the opening procession, Bishop Daniel R. Jenky, CSC, blesses the assembly gathered for Mass on Aug. 26 beneath a tent on the grounds of the Erin Feis (Irish festival) along the Peoria riverfront. (The Catholic Post/Tom Dermody)

On a weekend that Pope Francis was in Ireland addressing wounds of the church caused by scandal, Bishop Daniel R. Jenky, CSC, told those gathered for an Irish festival in Peoria on Sunday that the church will “arise with the strength of the Holy Trinity” and the prayers of the saints.

“My fellow Catholic believers,” said Bishop Jenky at the opening of the annual Mass at the Erin Feis celebration on the banks of the Illinois River, “I’d be fibbing if I didn’t say these recent days are a little rough for us.” 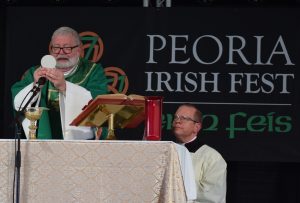 Bishop Jenky elevates the Host during Mass on the grounds of the Erin Feis (Irish festival) in Peoria on Aug. 26. (The Catholic Post/Tom Dermody)

But in the wake of headlines involving sexual abuse by clergy in the United States and around the world that are also impacting high levels of church leadership, Bishop Jenky called on Catholics to embrace the chorus of the Mass’s opening hymn: “I will rise today with the mighty strength of the Three-in-One.”

“We arise with the strength of the Holy Trinity,” said Bishop Jenky. “We have the truth of the Bible. We have Jesus as our high priest and king. We have the prayers of the Blessed Mother and St. Patrick to pray with us and for us.”

As hundreds of area Catholics sweltered in hot and humid conditions beneath a tent on the festival grounds, the focus on how to respond to scandals continued in a homily by Father James Pankiewicz, parochial vicar at three Peoria parishes.

GOSPEL OFFERS INSIGHTS ON HOW TO RESPOND

“This is a difficult time to be a Catholic,” Father Pankiewicz acknowledged. But he said the day’s Gospel reading, in which many disciples left Jesus after he taught on the Eucharist, offers “profound insights how we are supposed to address those questions many of us have.”

In the Gospel, Jesus asks Peter if he also wants to leave. Peter replies, “Lord, to whom shall we go? You have the words of eternal life.”

“When we turn on the TV, when we hear the news, and we see the scandal that has been brought forth by fallen members of the Body of Christ, like Peter we might have that temptation to perhaps leave,” said Father Pankiewicz, who assists at St. Mary’s Cathedral, St. Bernard, and Sacred Heart parishes in Peoria. 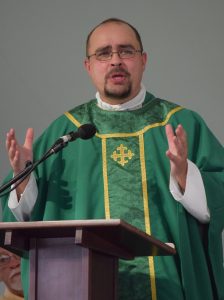 As we face difficulties both individually and collectively as a church, “we turn to Christ Jesus and place our trust and faith in Him who isn’t simply winning, but who has won,” said Father James Pankiewicz, homilist at the Erin Feis Mass. (The Catholic Post/Tom Dermody)

“But we have to realize,” he continued, “as Peter realized, that should we choose that path, where else are we going to go? Whatever other path we choose may offer temporary happiness. It will perhaps provide us with a bit of immediate gratification, but it is ultimately a dead end.”

Father Pankiewicz encouraged Catholics to place their faith in the Lord because nothing can separate us from God’s love and mercy, and that Jesus is already victorious over sin and death.

“He’s not just simply winning,” said Father Pankiewicz. “He has won. We’re not at halftime and the Lord is up by a field goal. No, the game is over. We know who wins. We know who has won.”

The devil, said Father Pankiewicz, is “simply trying to pull a few people down with him before the final consummation of the world.”

Father Pankiewicz began his homily by explaining why the bishop would pick someone with a Polish last name to speak at a Mass celebrating Irish faith heritage. “I assure you my mother’s maiden name is Gallagher,” he said with a smile, adding that DNA testing has proven he has Irish ancestry “along with several other ethnicities.”

The annual liturgy is coordinated by the Ancient Order of Hibernians. Those attending, many dressed in green, brought canned goods for area food pantries as admission to the festival grounds.

Music was a Hibernian Mass and Irish faith-themed hymns composed and led by the Midwest Irish singing group Switchback.