‘Garden of Hope’ is a growing service to neighbors of St. Ann Church in Peoria 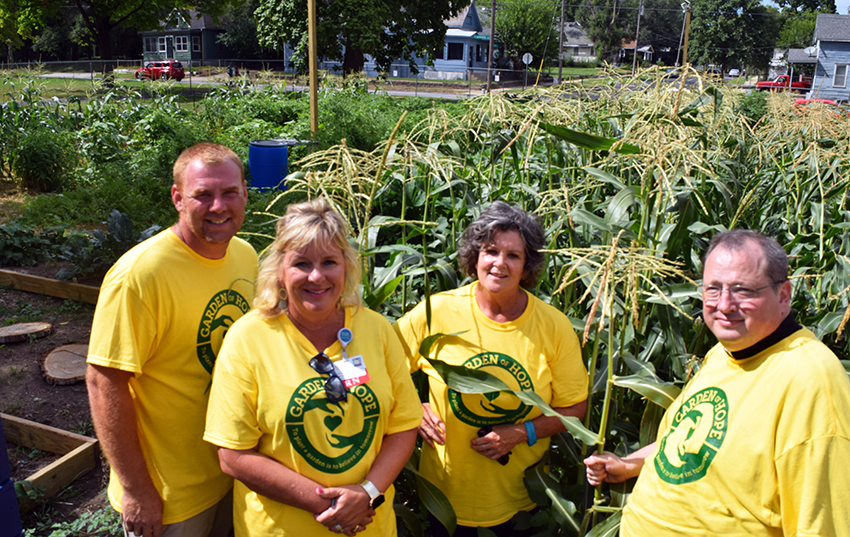 Hope is growing near St. Ann Church on Peoria’s south side.

The Garden of Hope, established modestly by the parish two years ago on a grassy lot west of the church parking lot, has blossomed into a valued neighborhood asset. And on Aug. 2, it drew hundreds of people to a festival that featured not only a giveaway of the garden’s bounty but also the free distribution of dozens of backpacks filled with school supplies. Dental and physical exams were offered courtesy of the OSF Care-a-Van. 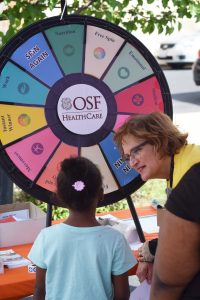 Peggy Jacques, a Faith Community Nurse, explains the OSF HealthCare wheel spin activity to a young visitor to the Garden of Hope Festival at St. Ann Church in Peoria on Aug. 2. When the wheel stopped on a health-related category such as “nutrition,”, the spinner was asked a related question. Children earned prizes including school supplies. (The Catholic Post/Tom Dermody)

“When I first started working at St. Ann, my office sat across from a window that looked right into all this open, blank area,” said Mary Ann Burk, a Faith Community Nurse. “I asked if I could start a community garden.”

Burk explained that the neighborhood surrounding St. Ann Church is among the most poverty-stricken in the state. Looking at the vacant lot, she envisioned a place that “would help nutritionally for these people but also feed their souls and bring them together.”

The Garden of Hope has brought together not only people, but organizations.

This summer, OSF HealthCare Saint Francis Medical Center in Peoria and the Society of St. Vincent de Paul joined the effort. Under the guidance of Mike Simon, coordinator of OSF Gardens, the Garden of Hope grew to encompass a quarter acre of land, with plans to expand to a full acre in 2019.

“I’d love to see some fruit bushes, blueberries, blackberries, raspberries, apple trees and pear trees,” said Simon, who is new to the OSF position but has 17 years of horticulture experience.

“The plan is to ultimately have multiple gardens in poverty-stricken areas that don’t have access to healthy foods, with people of that neighborhood or community running them,” Simon added. To that end, a community garden team has formed and includes representatives from the City of Peoria, the University of Illinois and Illinois Central College, the Peoria Health Department, and other community leaders.

The St. Ann garden will serve as a pilot “with the hopes of replicating the project within other areas of need,” said Jo Garrison, director of ambulatory patient care at OSF Saint Francis who heads the community garden team.

“THIS MUST BE A GOD THING”

At the Aug 2 festival, Father Don Rozskowski — administrator of St. Ann Parish — was among those dishing out roasted ears of corn and watermelon slices to both children and adults.

“This must be a God thing,” said Father Rozskowski of the Garden of Hope, “because it has blossomed into something much larger than it was.” Like the dozens of other parish and OSF representatives volunteering on the warm summer afternoon, he wore a bright yellow Garden of Hope t-shirt that also included the phrase “To plant a garden is to believe in tomorrow.” 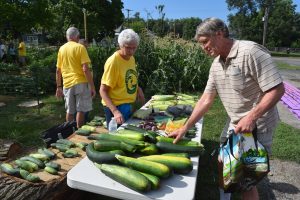 Eddie Carson looks over the zucchini and other fresh produce free for the taking at the Garden of Hopoe Festival at St. Ann Church in Peoria on Aug. 2. (The Catholic Post/Tom Dermody)

“Obviously, this neighborhood has a lots of struggles,” said Father Rozskowski. The garden, he says, offers a safe haven. It will soon include a statue of St. Francis and benches where neighbors can “sit, reflect and pray and hopefully be spiritually renewed as well.”

“It’s a nice opportunity to evangelize,” said Father Rozskowski. Among the booths at the festival was a St. Ann Parish table, staffed by Sister Judith Ann Croegaert, OSB, pastoral associate, and Tim and Mary Driscoll. They voiced words of welcome and explained parish ministries. Children received a cross and a card with “A Child’s Prayer.”

Burk said that neighbors have taken pride in the garden and help keep watch over it. Children at the festival were invited to put their handprints on brightly painted pallets of wood that will form a border fence.

While an area outside the fence with tomatoes, eggplant, peppers and lettuce is always open and free for the picking, there are set distribution dates for the majority of the produce, much of which is also given to area food pantries. Garden workers present will also hand what is ripe to passers-by who ask.

The name of the garden and the phrase on the t-shirt say it all, said Burk.

“That’s really what we believe. We believe in these people and we want to help them so that they do have tomorrow.”

EDITOR’S NOTE: More photos from the Garden of Hope Festival have been posted to The Catholic Post’s site on Facebook.