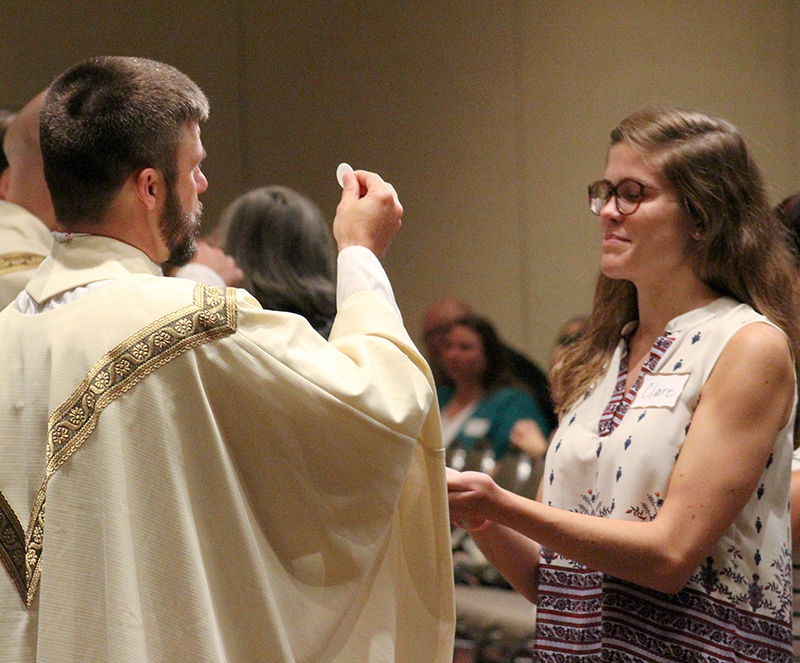 Claire Kunkel, a fifth grade teacher from Trinity Catholic Academy in LaSalle, receives Communion from Father Matthew Hoelscher, who later presented a breakout session, "Teaching the 'Why': The Gift of Catholic Education," at the Diocesan Summer Institute. (The Catholic Post/Jennifer Willems)

Adolescence and young adulthood can be a confusing time for them, as well as the people who love them, teach them and journey in faith with them, but God gave all of us that time of life for a reason, according to Sister Joseph Andrew Bogdanowicz, OP, the keynote speaker for this year’s Diocesan Summer Institute. 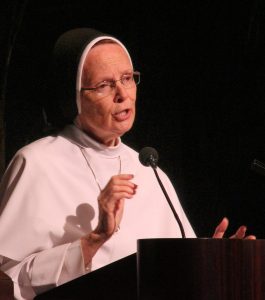 The event drew more than 660 Catholic school teachers and principals, catechists and parishioners from around the Diocese of Peoria to the Peoria Civic Center on Aug. 11. The day started with Sister Joseph Andrew’s talk, “The Battle Is on For the Millennial Generation: Just Who Are They Anyway,” and included a Mass celebrated by Bishop Daniel R. Jenky, CSC.

Sister Joseph Andrew also presented a breakout session on vocational awareness and the joy that brings, while Msgr. Steven Rohlfs, a priest of the diocese who assists with spiritual direction at St. Paul Seminary in St. Paul, Minnesota, talked about making ethical choices in everyday life. Father Matthew Hoelscher, chaplain at Alleman High School in Rock Island, explored the gift Catholic education offers by being able to point to God as the source of true meaning in the world.

The Diocesan Summer Institute is sponsored by the diocesan Office of Catholic Schools, Office of Evangelization and Faith Formation, and Office of Priestly Vocations. The Office of Divine Worship collaborates with them to make arrangements for the Mass.

Sister Joseph Andrew set the tone for the day’s discussion by speaking with great hope of a future that includes the creativity, the search for meaning, the social drive, and the ability to “think outside the box” that teens and young adults bring to the table. She acknowledged that this could cause some unease, however.

“Adults find more comfort in things remaining the same. Young people want to change the world,” said Sister Joseph Andrew, one of four foundresses of the Dominican Sisters of Mary, Mother of the Eucharist and the community’s vocation director.

For them, the only thing more dangerous than taking risks is not taking risks,” she said, quoting researchers like Dr. Daniel Siegel, author of “Brainstorm: The Power and Purpose of the Teenage Brain.” 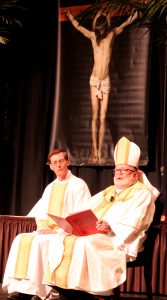 In his homily at the Mass for the Diocesan Summer Institute, Bishop Daniel R. Jenky, CSC, told the educators that in a world marked by moral confusion, they must be “men and women of deep faith and unwavering commitment to your Lord. . . . You are called to be the light of the world.” (The Catholic Post/Jennifer Willems)

At the peak of their “creative courage,” teens and young adults need people who will develop a “collaborative interdependence” with them and offer support and guidance so they can learn what they need to be leaders, she said.

But one more thing is needed.

“We have to have a solidity that is stronger than we are and that’s called God, our personal relationship with God. Otherwise it’s good luck,” Sister Joseph Andrew said. “God is in charge. His providence will take us to the end if we let him.”

Noting that this generation will face challenges that previous ages have not, she suggested a number of skills and habits that will enable the young people to find their way. The first was learning to handle incorrect peer pressure.

“Let’s show them how they can respect and appreciate a variety of people from different backgrounds, different cultures, different religions, yet hold on to their own beliefs,” Sister Joseph Andrew said. “That belief has got to be rooted deeply and it can’t be an intellectual book knowledge. It has to live in the heart.”

Hard work is another skill that will be required. She said that while the current culture tries to protect children and teens from difficult experiences, God has given us gifts that must be used to leave the world a little better than we found it.

Consumption will never lead to happiness, but production will, Sister Joseph Andrew said. She also suggested travel and experiencing different needs and wants in the world, taking part in service projects, and getting outside the “bubble” of everyday life. 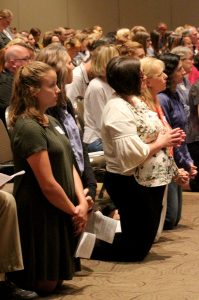 A group of teachers from St. Vincent de Paul School in Peoria kneel during the Eucharistic Prayer during the Mass for the Diocesan Summer Institute, which was held at the Peoria Civic Center on Aug. 11. Bishop Daniel R. Jenky, CSC, who presided at the liturgy, thanked the educators for their ministry. (The Catholic Post/Jennifer Willems)

Another vital skill is becoming truly literate and developing critical thinking skills. That means not giving the answer but encouragement: “You can think” or “I’ll help you with that.”

Sister Joseph Andrew said the young people could also benefit from learning to appreciate life, a good day’s work, and the freedom that comes from traveling light. A habit of prayer is essential, she added.

“We need to find the unique light in each individual child, even your own,” she said. “That’s the spark. It’s up to us to find it and bring it forth.”

“YOU BUILD UP MY FAITH”

Praising those present for the “generous ministry” they give to their parishes and the church as a whole, Bishop Jenky told them, “You build up our faith and it is a joy and blessing in my life to celebrate Mass with you.”

“In a world so marked by moral confusion, by discouraging pessimism, by a culture of death, by rebellion against God, and a profound perversion of values, you will need to be men and women of deep faith and unwavering commitment to your Lord,” he said in his homily.

“Together with your priests and deacons, encouraged by the powerful witness of our many consecrated religious, filled with faith, hope and charity, you will need to stand out in this passing world and not blend in,” Bishop Jenky emphasized. “You are, even on this earth, citizens of heaven, the people of God and the very army of Christ. You are called to be the light of the world.”

As Mass ended, he asked the teachers, principals, catechists and parishioners to turn to each other and offer a round of applause.

EDITOR’S NOTE: More photos from the Diocesan Summer Institute have been posted to The Catholic Post’s site on Facebook.