Assistant principals move up at three schools after mentorship experiences

Another way new principals have been given an opportunity to grow professionally is to serve as assistant principals for a year or more, in some cases while they complete their master’s degree in educational administration.

Related story: New principals at Catholic schools this fall will include leadership teams

“Mentorship is critically important for any new principal, public or private,” said Jerry Sanderson, associate superintendent of schools for the Diocese of Peoria. He noted that not only does this give them a chance to get practical, on-the-job experience, but it allows them to discern if being a principal is something they are truly called to do.

That was the case for Deb Myers, who succeeds Jerry Carls at Trinity Catholic Academy in LaSalle; Jack Dippold, who was mentored by Jodi Peine at St. Philomena School in Peoria; and Karen Jones, who prepared for her new post under the guidance of Richard Morehouse at St. Mary School in Pontiac.

“HEART OF A TEACHER”

Deb Myers has spent her whole career as an educator at Trinity Catholic Academy (formerly St. Patrick School) in LaSalle.

A stay-at-home mom while her sons were little, she went to school when they did, earning a bachelor’s degree in education from Northern Illinois University in DeKalb in 1997. By that fall, she was teaching junior high math and science and had the eighth grade homeroom at Trinity Catholic Academy. She has also taught eighth grade religion. 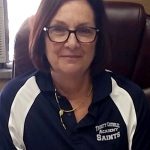 It was Father Tony Dittmer who first told her, “You would make a great principal.”

With encouragement from her husband, Dan, Myers pursued a master’s degree in educational leadership through the University of St. Francis in Joliet. She met with a cohort of about 12 people for two years to do the work for the program, which was designed for full-time teachers who want to go into administration.

“Last year was the first time our school ever had an assistant principal,” Myers said. “I was teaching four days a week and then the assistant principal one day a week. As it got a little closer to the end of the year, Jerry (Carls) was working with me a little more and getting me more involved in the administrative aspect of the school.”

Her goal is to continue her predecessor’s commitment to Catholic education and help Trinity Catholic Academy to grow and inspire new generations.

“When I was teaching, I told the students many, many times, ‘My job is to get you to heaven,’” Myers said. “I would tell them over and over again, ‘You are the future of the church.’”

While it will be difficult for the woman who has “the heart of a teacher” not to be in the classroom, she said she’ll still see the students in the hallways and the lunchroom every day.

Being at St. Philomena School in Peoria is a homecoming of sorts for Jack Dippold. Not only did he and his sisters graduate from the school, but his nieces go to St. Philomena and his classmates are bringing their children back. 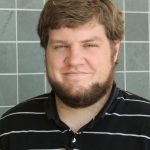 Dippold didn’t start out in education, however. When he went to Knox College in Galesburg, was looking at a math-based career, such as accounting. It wasn’t a good fit, however.

“I had done a lot of coaching for nieces and helped out at Peoria Notre Dame with some wrestling coaching. When someone suggested I think about teaching, I jumped in,” he said.

After taking a few classes and working with children in the classroom, Dippold knew he was on the right path.

He earned his bachelor’s degree in elementary education from Knox College in 2009 and his master’s degree in educational leadership from Western Illinois University in 2014.

Dippold’s experience includes teaching fourth grade at Nielson Elementary School and serving as the junior high dean at Churchill Junior High, both in Galesburg. He also was the assistant principal at Harrison Community Learning Center in Peoria before coming to St. Philomena in 2017.

Working with Peine gave him an opportunity to build relationships with the teachers, students and families at the school, and observe how she ran staff meetings, interacted with parents, handled teacher training, and attended to the day-to-day operations of the building.

“I’m extremely excited, but it doesn’t feel real quite yet,” Dippold said. “I have to find my rhythm and my schedule and how everything works for me.”

Karen Jones credits her time at St. Mary School in Pontiac for bringing her into the Catholic Church. She calls it “God’s mysterious plan for my life.”

“Just having the kids teach me about the faith has been wonderful,” she said.

Jones stayed at home with her four children until they were in junior high school, then she enrolled at Illinois State University to pursue a bachelor’s degree in elementary education. After receiving that in 2004, she taught at public schools in Graymont, Cornell and Tonica. 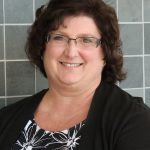 She went on to earn her master’s degree in school leadership from Olivet Nazarene University in Bourbonnais in 2013.

Then came a call from her sister-in-law, Carol Duffy, a second grade teacher at St. Mary School in Pontiac, who told her there was an opening.

Jones eventually did and everything fell into place.

“I’m finally at a place where I belong,” she said. “I’ve stopped being in charge and let God be in charge. God’s plan is definitely a little bit different than mine. He’s the one laughing at me now.”

She taught fourth grade the first two years at St. Mary and served as assistant principal to Richard Morehouse last year while continuing to teach. Now she’s preparing to welcome back the students as their principal.

“It’s a great place,” Jones said, noting the family atmosphere among the staff. That’s something she hopes to foster this year.

She also wants to make the principal’s office a place where students and staff alike can come to chat or just rest quietly for a few minutes.

Jones said she appreciates being able to talk about God and faith in any subject that is taught without being called to the office and told, “You can’t talk about that.”

“Here we talk about that. We go to church. We pray,” she said. “If there’s a need within our class or our students or our families we can say, ‘I’m going to put math on hold for today. We’re going to go over to church and pray a rosary,’ and there’s no question about that.”