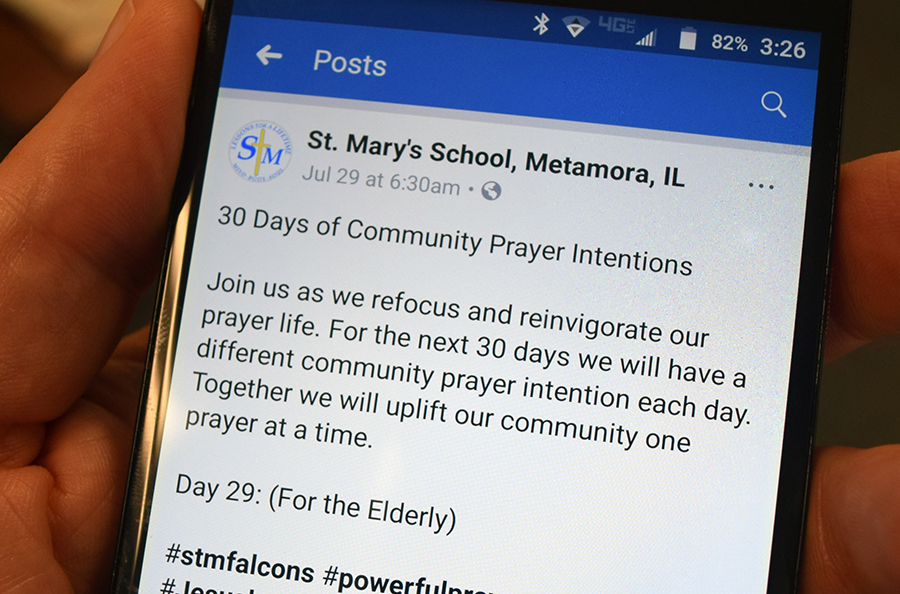 The Facebook post from St. Mary School in Metamora on July 29 sought prayers for the elderly. (The Catholic Post/Tom Dermody)

METAMORA — Social media promotes everything from recipes to events to political causes, but St. Mary School in Metamora has found a much better use for it.

Starting in May, the school started posting community prayer intentions each day on Facebook. The effort has been so successful that it will continue and is poised to grow, according to Heather Ioerger, St. Mary’s director of marketing.

“I think people go about their business and they forget to pray often throughout the day,” she told The Catholic Post. “When you’re scrolling through Facebook and you see a prayer pop up, maybe it will catch people’s attention, to stop and refocus and say that prayer and then go on.” 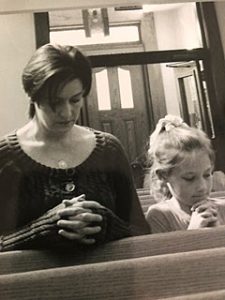 Connie Dubois, a kindergarten teacher at St. Mary School in Metamora, and her daughter, Emma, a St. Mary graduate, take a moment to pray together. (Provided photo)

Ioerger said the topics are kept open-ended on purpose. In July, for example, St. Mary has sought prayer for “a stranger,” “pregnant women and women who long to be mothers” and “those suffering from mental illness.” Community leaders, local heroes, such as firefighters and police officers, college students, the elderly and the homeless have also been lifted up in prayer.

“If they stumble upon that and their kids are right there, maybe they’re going to say, ‘Let’s pray. Let’s pray for a stranger right now,’” Ioerger said. “That’s teaching their kids the value of prayer and the value or praying for someone they don’t know, just making sure they’re focusing their thoughts on other people in the summer, as well.”

The staff and supporters of St. Mary School are hoping it will reach the community in another way, too.

“In the Metamora area the schools are phenomenal. There’s nothing wrong with our public schools,” Ioerger said. “But I’ve talked to a lot of parents and one of the things that we really felt was different about us was prayer and the fact that we pray in school.

“I wanted to make sure people understand that this is what we’re teaching our kids, these kinds of values. We really want that to be known out there, that this is one thing that makes us stand out above the rest,” she explained.

Keeping St. Mary School going strong is important for the Ioerger family, which has had students at the Metamora Catholic school for 54 consecutive years. That started with Marvin and Fran Ioerger and their seven children, one of whom is Ed, Heather Ioerger’s husband.

The line now extends into the next generation. Two of Heather and Ed Ioerger’s children are St. Mary graduates and their son A.J. is enrolled in third grade this year.

“There are a lot of families that are generational there,” Heather Ioerger said. “I just want to see it succeed. It’s important to many families around here.”

In August, the community prayer intentions will focus on back to school prayers, and school parents are taking the next step. Ioerger said they plan to gather in the school cafeteria once a week after dropping off their children in the morning. It will be for 15 or 20 minutes, “just long enough to pray for our school, pray for our teachers . . . and really work on incorporating prayer into all our lives a little more.”