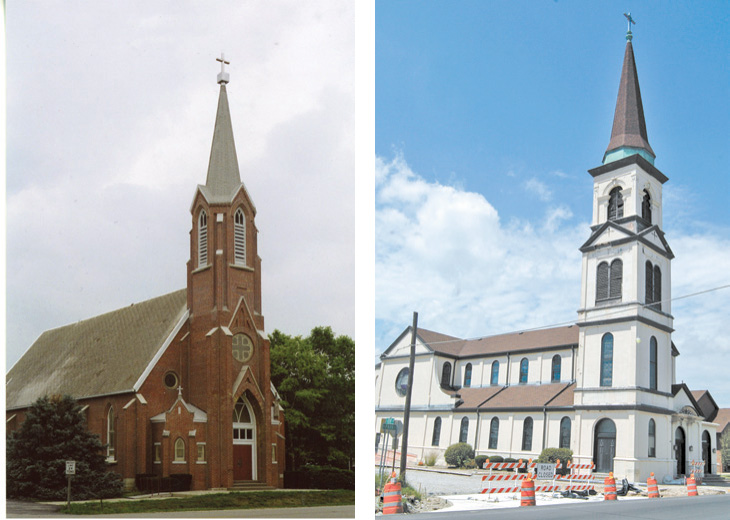 The former Annunciation of the Blessed Virgin Mary Church in Eagle Township, left, and the former Immaculate Conception Church in Streator.

STREATOR — Buyers have been found for the properties associated with the former Immaculate Conception Parish in Streator and the former Annunciation of the Blessed Virgin Mary Parish in Eagle Township.

Details of the sales — one finalized and one imminent — were announced by Msgr. Philip D. Halfacre, pastor of St. Michael the Archangel Parish in Streator and Sts. Peter and Paul Parish in Leonore, in the July 15 parish bulletins of those two faith communities.

Annunciation Church and its adjacent rectory, located along Illinois Route 18 just west of Streator, have been sold to Coras, Inc., a Streator-based trailer manufacturing company. The Eagle Township parish was merged into Sts. Peter and Paul Parish of Leonore at the start of 2014.

The new owner of the Immaculate Conception properties on Park Street just north of downtown Streator — including the church, rectory, hall, and parking lot — will be 1206 East Elm, LLC, an organization that works with students who wish to come to the United States from abroad to pursue their education. The closing of the sale was expected in the days following The Catholic Post’s deadline on Tuesday.

Immaculate Conception Parish was one of four Streator faith communities that merged to form the new St. Michael the Archangel Parish in 2010.

In his letter to area Catholics, Msgr. Halfacre acknowledged the sadness some are experiencing by the sales, calling it a “bittersweet event” similar to the sale of a family home.

“Countless events that deeply touch our lives take place in a parish church,” he wrote, including family weddings, baptisms, funerals, as well as weekly or even daily participation in Mass.

“Saying ‘goodbye’ to our church is not altogether unlike the sale of a family home,” Msgr. Halfacre continued. “Yet our farewell to our former home does not undo or negate all the good that was accomplished there. Those events are written in the Book of Life.”

Msgr. Halfacre said he is pleased with the planned uses for both properties, calling them “good outcomes.”

The former Immaculate Conception properties will reportedly be used for educational purposes. Meanwhile, the former Annunciation rectory will become offices for Cora with the church used for the private devotional use of the new owner, who is a member of St. Michael the Archangel Parish.

NEW USES FOR SOME ITEMS

The purchase prices were not disclosed. The altars have been removed from the churches along with several other items.

“For some things, we were able to find new homes,” Msgr. Halfacre told The Catholic Post. For example, the stained glass windows that were in Immaculate Conception Church are being sent to Tanzania for use in a new church there.  Arrangements are now being made for the stained glass windows of Annunciation of the Blessed Virgin Mary Church to go into a church within the Diocese of Peoria.

Because the parish hall at Immaculate Conception had been used for events sponsored by St. Michael the Archangel Parish, future events will take place at other locations such as the parish grade school.

In addition, the rectory at Immaculate Conception had continued to be used by priests serving St. Michael the Archangel.  Msgr. Halfacre said a home that was left to the parish in the estate of Vincent and Ann Marie Riehl will become the new rectory.

He thanked parishioners who volunteered  labor and expertise to update the home for use as a rectory, including the creation of a chapel.

Both of the sold churches were dedicated 134 years ago. Immaculate Conception Church was opened for worship late in 1884. That same year, Annunciation of the Blessed Virgin Mary Church, whose 100-foot steeple is visible for miles above surrounding farm fields, was dedicated.

“We have a lot of memories associated with our parish churches as I have with the churches of my history,” said Msgr. Halfacre. “But at some point you say ‘We simply can’t hold onto all of these properties. It’s just not good stewardship. Things have to advance forward.’

“We are glad to have found buyers so it’s not just a matter of an empty church building standing vacant,” he added, thanking Streator city officials for their help in finding buyers, particularly for the Immaculate Conception properties.