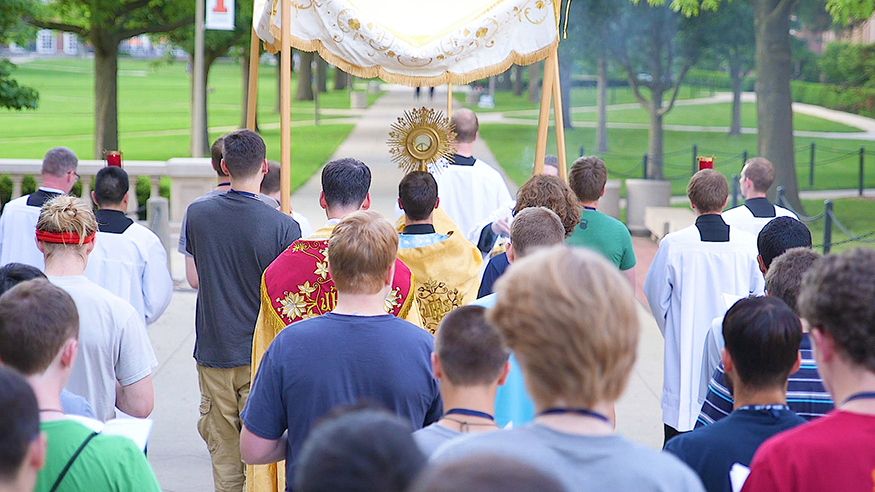 Participants in Session I of Emmaus Days take part in a eucharistic procession through the campus of the University of Illinois. This was the first year that St. John's Catholic Newman Center on campus hosted two of the four summer vocation awareness retreats. Session I was for young men college-aged or beyond. (Provided photo/Fiat Films)

Those leading about 125 young men and boys in a series of Emmaus Days vocation awareness retreats in the Diocese of Peoria this summer knew their work was important, but acknowledged they weren’t the real Retreat Master.

“We show up and do the things we know we’re supposed to do, but it’s really Christ who is directing the retreat — leading all to an encounter with Him,” said Father Timothy Hepner, diocesan director of vocations for recruitment. 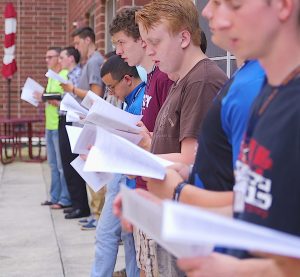 For many in the four retreat sessions — which took place in June and July in either Champaign or Peoria — that encounter took place during silent adoration of Jesus in the Blessed Sacrament.

“In a sense, it really doesn’t matter what I say or any of the speakers say,” said Austin Bosse, a diocesan seminarian who served as prefect of this year’s Emmaus Days. “The most impactful thing is getting guys to enter into that conversation with Christ and coming to know his voice.”

HOW IS GOD CALLING?

At Emmaus Days, participants also have opportunities to interact with priests, seminarians and peers, both in serious spiritual matters and lighthearted activities. The annual retreats are sponsored by the diocesan Office of Priestly Vocations, and each session concludes with a visit by Bishop Daniel R. Jenky, CSC, who answers questions and celebrates the closing Mass.

The retreats are designed to have participants prayerfully consider what God is calling them to do with their lives, including a possible vocation to the priesthood. The theme for all four sessions was based on John 15:13: “No greater love has a man than to lay down his life for his friends.”

“The focal point as we went through all the retreats is the way in which we’re called to love,” said Bosse, who this fall starts his second year of theology studies at Mount St. Mary’s Seminary in Emmitsburg, Maryland. “There is no love without sacrifice, all love requires it, and Christ gives us that witness.”

This year, for the first time, the sessions for the two older groups took place at St. John’s Catholic Newman Center on the campus of the University of Illinois in Champaign. Twenty-three young men of college age or beyond gathered there for Session I on June 22-25, while the same number of high school juniors and seniors took part in Session II from June 29 to July 2. 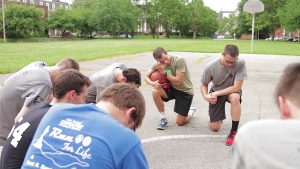 Pausing for prayer on the basketball court. (Provided photo/Fiat Films)

Retreatants slept in the Newman Center’s dorms — “We had our own private wing set aside for us, two floors,” said Bosse — and ate in the cafeteria. Many activities took place in Lewis Lounge or at St. John’s Catholic Chapel.

The campus atmosphere made for a different experience than Emmaus Days retreats previously held at Nazareth House near Henry, which is unavailable this year due to a building project. For example, the older group is asked to observe a day of silence.

“The guys said it was a little strange being in complete silence and there being college people walking around and you’re not communicating with them,” said Bosse. On the flip side, the location led to a public witness of faith when the older group took part in a eucharistic procession around the university’s quad.

“We definitely had a lot of heads turned for that,” said Bosse, describing the Sunday afternoon procession through campus as “pretty awesome.”

“There were people holding their phones out taking videos of us as we were chanting and processing with Jesus,” added Father Hepner.

BUILDING A HABIT OF PRAYER 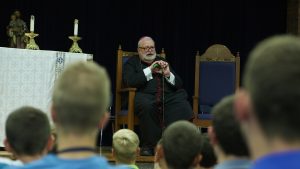 At both locations, priests from the region came by to mix with the retreatants, make a presentation, or hear confessions.

Bosse explained that, for the younger groups, the emphasis is on establishing the prayer life needed in order to know God’s will. The sessions for the older groups “reignite that fire” and ask more directly what God is asking them to do with their lives.

Daniel Dionesotes, a seminarian from Bloomington who served as assistant prefect for the retreats, said those leading Emmaus Days also learn from and are inspired by the experience.

“I am on the same journey these young men are on,” said Dionesotes. “At the end of all the retreats I’d look at the guys and think ‘They taught me so much.’ Even the guys at a very young age who have taken to the faith and made it their own are such an inspiration.”