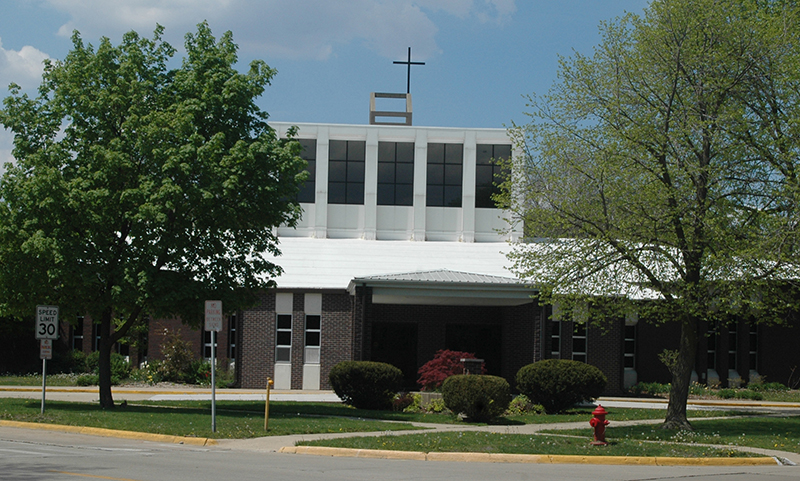 The present St. Patrick Church in Dwight, built in 1970, will be the site of an anniversary Mass celebrated by Bishop Daniel R. Jenky, CSC, at 10:30 a.m. on Sunday, Aug. 12. (The Catholic Post file photo/Tom Dermody)

DWIGHT — St. Patrick Parish here will celebrate 150 years of faith with a series of events in early August, highlighted by an anniversary Mass to be offered by Bishop Daniel R. Jenky, CSC, at 10:30 a.m. on Sunday, Aug. 12.

The festivities begin on Thursday, Aug. 9 — the date that Father Laurence Dunne was appointed as St. Patrick’s first resident pastor in 1868. St. Patrick Church will host a spiritual evening of music and adoration beginning at 6:30 p.m. Music will be led by Michael James Mette, a Catholic speaker and musician from St. Louis who tours with his family, known as the MJM7 Band.

On Saturday, Aug. 11, family entertainment and an ice cream social are scheduled to begin at the parish hall at 7 p.m. A program will include highlights from the parish’s history, interviews with longtime members, and singing by Mary Pfeifer. Photographs chronicling the history of the parish will be on display.

Two celebrations will take place on Sunday, Aug. 12. Concelebrating the 10:30 a.m. anniversary Mass with Bishop Jenky will be Father Chris Haake, pastor of St. Patrick Parish since 2013. A picnic will follow in Renfrew Park for parishioners and guests at 1 p.m.

Many of the Dwight settlers in the 1850s were Irish and German immigrants who came to farm on the prairie or work on the railroad that would connect Chicago to Bloomington and southward. The Catholics among them would first gather in homes and other buildings for Mass.

As their numbers grew, Richard P. Morgan — one of Dwight’s founding fathers — in 1861 donated a parcel of land for a Catholic church. A white frame church was almost completed when a windstorm swept the church from its foundation. Work began anew and the church was completed in 1862.

Priests from St. Patrick served the inmates of Dwight Correctional Center for more than five decades until its closing in 2013.