Cynthia Ryan McComiskey and her mother, Mary Ann Ryan, take a few minutes to look over the soybean fields near their DeWitt County home. With her father's death in January, McComiskey has become the fifth generation of her family to run their 650-acre farm. (The Catholic Post/Jennifer Willems)

CLINTON — As the soybeans fill the fields of her family farm, Cynthia Ryan McComiskey is facing the first growing season since her father, Gerald “Jerry” Ryan, died in January. Thanks to him, she was well prepared to take her place as the fifth generation of farmers in this DeWitt County community, even though she lives 600 miles away. 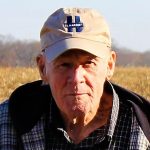 McComiskey is an associate professor at the University of Alabama at Birmingham, where she and her husband, Bruce, teach rhetoric. They have two daughters, Celia, 20, and Helena, 17.

She teaches science writing, medical writing and magazine writing, and she has written for a variety of publications, including the Los Angeles Times.

Traveling back and forth from Alabama to central Illinois to care for her aging parents, she realized they would have to consider another way of running the farm if they were going to keep it in the family. That conversation became urgent when Mr. Ryan was diagnosed with congestive heart failure and her mother, Mary Ann Ryan, moved to a nursing home in Clinton.

“I took family medical leave from my university and I lived here for about eight months and walked him through the whole process,” McComiskey said.

At the same time, Mr. Ryan helped her with an article for the Los Angeles Times about what happens when the “sandwich generation” includes farm families who can’t relocate. Her editor pushed her to take it to the next step and write about what families will do after the parents are gone and the responsibility passes to the next generation.

“I spent a lot of time with him and — I told my mom this many times — if I had not we’d be in serious trouble right now,” McComiskey said. “During that eight months I learned how to do things on the farm.”

Her lessons included taking photos of the fields and then looking at them with her father to discuss what was happening and what needed to be done. Sometimes he would ask her to look for the “hang” of the corn or the color, or to take a measuring stick to see how high the beans had grown.

“Every day it was a different thing,” McComiskey said. “Then we would get in the truck and I would drive him around and he would look at things.”

Mr. Ryan also took her to the grain elevators and introduced her to people, showed her his filing system, and taught her how to pay bills.

“By the end, I was writing the checks,” she said.

Even before his diagnosis, Mr. Ryan had asked McComiskey if she was interested in keeping the farm, she recalled.

“I never hesitated. I always knew I would keep it,” she told The Catholic Post. “That affected decisions he would make.”

McComiskey said there is a permanence to farming that she appreciates.

“Even if you don’t make a lot of money or prices go down or things become outrageously expensive, like equipment and farm land, there’s kind of a stability and permanency to it that I don’t think I have in my life in any other way, and I want my kids to have that,” she explained.

Jerry and Mary Ann Ryan were married for 58 years and worked their 650-acre farm together. Some of the land came from his family and some came from hers, but they purchased most of it, said Mrs. Ryan, who now lives in a nursing home in Clinton. 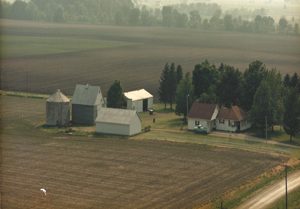 This aerial photo, taken in 1975, shows the scope of the Ryan family’s farm. (Provided photo)

The Ryans were recognized for their lifelong work in 2008, when Bishop Daniel R. Jenky, CSC, presented the Diocese of Peoria’s St. Isidore Rural Life Award to them.

McComiskey was born in Clinton in 1963. Baptized at St. Patrick in Wapella, she would go on to attend St. John the Baptist Church in Clinton with her family.

Her roots in the Diocese of Peoria run deep. Not only has her extended family been active in the Catholic Church for more than 150 years, but Bishop Edward O’Rourke was a cousin of her paternal grandmother.

Her agricultural roots grew more slowly. She said that as a child she walked through the beans a couple times and asked, “Dad, is this a weed or a bean?”

“Go in the house!” he told her, the memory making her and Mrs. Ryan laugh.

Change has always been a part of agriculture, McComiskey said, and what she’s doing now is a different manifestation of that.

“It’s just a different way of doing things,” she told The Post. “You have tenants and they run the farm in terms of the day to day, but it’s still in the family.”

While her father did not embrace computers, technology will allow her to be involved. She added that there are smartphone applications that can tell her not only how much rain there has been in central Illinois, but what the soil is like in her own fields.

“From the outside it looks like what I’ve done with my professional life and what my family has done are completely different, but it’s really not,” McComiskey said. “When you are on a farm — it sounds cliché — you’re watching the cycle of growth. You have to have patience and you have to have faith that it’s going to work out. That’s really what writing and teaching are.”

The “op-ed” piece Cynthia Ryan McComiskey wrote about family farm succession in central Illinois for the Los Angeles Times made her father, Gerald “Jerry” Ryan, proud when it was published last November. When she was invited to speak to agriculture classes at the University of Illinois, he went with her and offered his insights to the students.

To read the article, visit http://www.latimes.com/opinion/op-ed/la-oe-ryan-family-farm-20171119-story.html