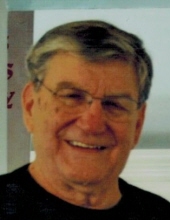 WYOMING — A funeral Mass was celebrated at St. Dominic Church here on July 11 for Father Thomas R. Brajkovich, 87, a senior priest of the Diocese of Peoria.

Msgr. Timothy Nolan was principal celebrant of the funeral Mass, with Deacon Harley Chaffee as homilist.

Deacon Chaffee, who serves St. Malachy Parish in Geneseo and was ordained to the permanent diaconate in 1983 during Father Brajkovich’s time there, recalled him as a “brilliant liturgist” who was always respectful to others.

Father Brajkovich was born on June 15, 1931, in Cleveland, Ohio, to John F. and Lucille (Jacovich) Brajkovich. After his parents died — his mother in 1938 and his father in 1943 — he was raised by his uncle and aunt, Anton and Lorraine Jacovich.

The family moved to Peoria, where Father Brajkovich attended Spalding Institute for two years before joining the U.S. Navy. He finished his courses while serving his country from 1949 to 1953 and Spalding Institute granted his diploma based on his test scores.

He went on to St. Bede Junior College in Peru for two years and studied philosophy and theology at St. Paul Seminary in St. Paul, Minnesota.

ENJOYED BEING A PASTOR

He was ordained a priest of the Diocese of Peoria on May 28, 1961, at St. Mary’s Cathedral in Peoria.

“For as long as I can remember I wanted to be a priest,” Father Brajkovich told The Catholic Post on the occasion of the 50th anniversary of his ordination in 2011. He noted his mother’s deep faith and insistence that her children received a Catholic education.

“I enjoyed being a pastor,” he said in the 2011 interview. “It was the people. It was just doing what I was ordained to do.”

Father Brajkovich was granted senior status in 2003, assisting at St. Ann Parish, Peoria, and St. Edward Parish, Chillicothe, for several years before moving to Dewey, Arizona. He has resided in Hopedale for the past two years.

Surviving are one brother, John (Marge) Brajkovich of Marblehead, Ohio; two sisters, Shirley Brajkovich of Cleveland, Ohio, and Joan (Rich) Oliver of Port Charlotte, Florida; one nephew; 10 nieces; one foster nephew; and two foster nieces. He was preceded in death by both his parents and foster parents; one brother, Donald; a sister-in-law, Vi Brajkovich; and a foster sister, Jeanette Jacovich Beechler.

In lieu of flowers, memorial contributions may be made to St. Jude Children’s Research Hospital.