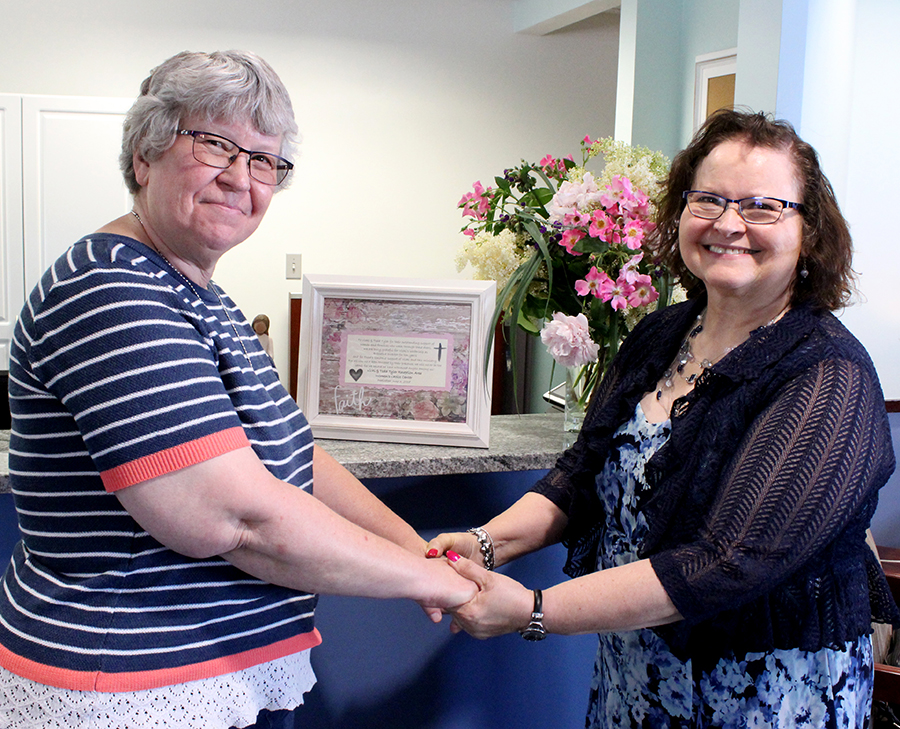 Vicki Tyler, left, retiring executive director of the Women's Choice Center, and Linda Rubey, the new executive director, stand in the newly dedicated Vicki and Todd Tyler Reception Area at an open house on June 3. The center is now located in the former Planned Parenthood of the Heartland facility. (The Catholic Post/Jennifer Willems)

BETTENDORF, Iowa — A new home, new executive director and new opportunities to serve Quad Cities families in the most loving way possible were all celebrated at an open house at the relocated Women’s Choice Center on June 3.

The event also offered a way to thank retiring director Vicki Tyler and her husband, Todd, for their work over the last 10 years. Those who walk through the doors of the facility, now located in the building that housed Planned Parenthood of the Heartland until last December, will be welcomed in the Vicki and Todd Tyler Reception Area.

The Women’s Choice Center of the Quad Cities is now located in a refurbished building that housed Planned Parenthood of the Heartland until last December. (The Catholic Post/Jennifer Willems)

While one half of the building will provide the services that the Women’s Choice Center is known for — pregnancy tests, counseling and resources to support expectant women and help them choose life — the other half of the building is being converted into the area’s first-ever pro-life, pro-family medical clinic. It will also have a chapel, dedicated to the memory of Father Johnjoseph DePorres “Jerry” Logan, that can be accessed throughout the day for prayer.

“He was so faithful about coming over here,” said Mary Jones, president of the Life and Family Educational Trust Board of Directors that oversees the Women’s Choice Center, about Father Logan. A priest of the Diocese of Peoria, he died Feb. 9, 2016.

“She has a different skill set than Vicki had, but we would never be here if it weren’t for Vicki,” said Mary Walsh, vice president of the board. “God just puts the right people in the right place at the right time.”

“Vicki has done so much to lay the groundwork and grow the organization,” Rubey agreed.

“Now with the purchase of the Planned Parenthood building and the changes that go with that and looking ahead at having a clinic for our community, I feel like I have great grounding, that I can step in and take the Women’s Choice Center to the next phase,” she said. “I’m really excited about that.”

Rubey added that she sees this as more than a job: “It’s a mission.”

While no one could foresee that Planned Parenthood would close four clinics in Iowa last year, Jones said it was on the “prayer radar” of the board, the volunteers, the staff and supporters of the Women’s Choice Center. 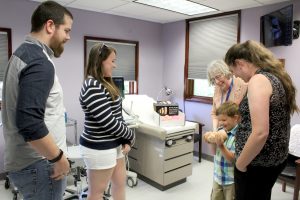 During the open house in the relocated Women’s Choice Center on June 3, 4-year-old Jack Wilbur holds a model of what a baby would look like at 26 weeks, while his mother, Sharon, and Mike and Lindsay Millea (left) look on. (The Catholic Post/Jennifer Willems)

“From day one the goal was to shut down Planned Parenthood,” Walsh told The Catholic Post.

When it closed in December, the property was purchased by another buyer and sold to the Women’s Choice Center for $1 million. The first thing they did was ask the Diocese of Davenport to send priests to exorcise and bless the building with holy water. It took two priests two hours to do it.

“On that day praise music was played for 24 hours, nice and loud,” Walsh said. In addition a prayer team from a healing ministry in the Quad Cities came in and prayed throughout the building.

People have asked Jones how she felt when she first walked into the building.

“I felt like God has already claimed this place,” she said. “It’s like, ‘God, you are in the redemption business. Let’s go!’”

In fact, the board has established The Redemption Project: A Vision for Life and Families to help pay off the mortgage and fund the renovations. The refurbishing started six weeks ago and the Women’s Choice Center moved from 2711 Happy Joe Drive, which is across the street, two weeks ago.

That property is being leased by Erin Hartwell of Absolutely Positively Kids! Academy, an early learning center that focuses on literacy for children from 6 weeks to 13 years old.

“The goal was if somebody had been in here before and unfortunately made the choice (to have an abortion), that if they came back for our services they wouldn’t recognize it. We don’t want those memories to come back,” Walsh said. 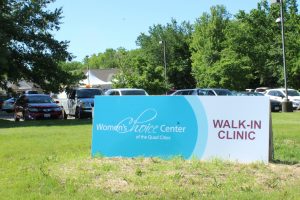 The building has been painted light colors inside and out and “looks happy,” as visitors to the open house said.

“It’s been amazing to see God working in this,” Walsh said.

As Tyler moves toward her retirement on June 15 and prepares to move to Colorado, she said she has tried to do nothing but love people and stand in faithfulness, knowing that God’s grace is sufficient and timing is perfect.

“Everything that was in here was dark. There was no life here. There was death,” she said. “It’s not like that anymore. It’s full of life. . . . We thank God and give him the glory.”