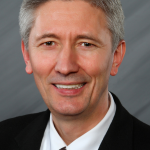 EDITOR’S NOTE: This is the second in a three-part series written by Dr. Michael Porubcin, a member of St. Ambrose Parish in Milan. Dr. Porubcin is a hematologist and oncologist who serves as vice president of the St. Thomas Aquinas Guild of the Quad Cities, a chartered guild of the Catholic Medical Association.

In the first installment, we were introduced to Becky, also from Milan, and her journey with advanced cancer. She had just hit “rock bottom,” with a four-inch mass discovered in her right lung, two new nodules in the left lung, and two soft tissue tumors, including one in her right lower back that caused great pain.

In spite of her initial fear and anxiety, Becky did not give up. On Aug. 22, 2006, she and her husband made a trip to Houston and, at the recommendation of the sarcoma specialist at MD Anderson Cancer Center, she returned to our office to begin palliative chemotherapy. After six weeks of treatment leading to greater than 50 percent shrinkage of her largest tumor, Becky accepted this news with the biggest smile I had ever seen. 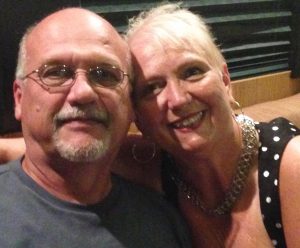 Becky is shown with her “champion,” her husband Steve. (Provided photo)

With incredible poise she announced, “Doctor, I have been healed.”

She interrupted me. “No, I really mean it. I’ve been pain free for weeks now! I am 100 percent sure that I am healed.”

It was then when she told me about her incredible experience.

Here is Becky’s own account of that providential night, as written to me in the weeks following her encounter.

“I COULD REALLY USE SOME HELP HERE”

You, of all people, know how difficult it was for me in the weeks before I went to Houston. It was becoming increasingly difficult to breathe, and that was so frightening. Because of the pain in my side I was sleeping in a recliner in my living room and had been for quite a while.

One night during this time I woke to a thunderstorm. I’m not afraid of them as a rule, but for some reason I was terrified that night. I really felt the need to be curled up next to my husband, but I knew it was fruitless to try to lay down. I went to our bedroom and sat next to the bed for a few minutes and then finally said a prayer asking God to please allow me to lay down just until the storm was over.

As I gingerly slipped in next to my sleeping husband, I remembered a conversation I had earlier in the day with my sister. She had asked me if I ever prayed to the angel Raphael. I told her I had never heard of him. She explained that she had read he was the angel of healing and that maybe I should include him in my daily devotions. So, as I lay down I said, “Look, Raphael, if you’re listening, I could really use some help here.” I said this as an afterthought more than anything.

I REALIZED I WAS UNDER A WING

The next thing I knew, I looked up and realized I was under a wing. It was white, and I could see a slight pink color right over my head. I knew it was very large because it covered me head to toe and side to side. I am very claustrophobic, and I remember that I was surprised that I didn’t feel at all confined, just warm and comforted. I even wrote in my journal that I felt a feather on my foot.

Then I saw the tumor, the large one, in my right lung. It looked like a black ball of string, and it was surrounded by a green light that was swirling all around it. Next, I saw the two smaller tumors in my other lung, again with the green light. I then saw the one on my back. I remember being surprised that I didn’t see the one on my head (of course, when I got to Houston the MRI showed there was nothing there). I don’t know how long it took for me to see these tumors, but it seemed like a long time.

The next thing I remember was hearing a voice in my ear. It was very soft — this part is always hard to explain. It had an unusual quality that is indescribable. It said, “Everything is going to be okay.” Then, I saw a face that was fuzzy, without features, moving away from me. I think it was the face of a man, but I can’t be sure.

I woke up three hours later. I honestly cannot tell you if I was asleep when all this happened or went to sleep afterward, and I don’t think it matters. I slept for three hours laying down for the first time in so long. One thing I know for certain is that from that time until now, I have never taken another dose of pain medication.

Later that day when I was telling my sister about what happened on the phone, she became very excited. She came right over and brought the book she had been reading when she learned about Raphael. It said that he was, indeed, the angel of healing and could only come to you when you called. He could only do God’s bidding. He would enfold you in his wing and bring a green healing light to the places in your body that were in need of healing, and he would whisper a message to you before he left. Needless to say, we were both more than a little shocked. It was nearly word for word as I had written it in my journal.

As confirmed by checking Becky’s journal, the date of the encounter was Aug. 3, 2006.

I remember hearing a voice in my ear. It was very soft (and) had an unusual quality that is indescribable. It said, “Everything is going to be okay.”

Caption: Becky is shown with her “champion,” her husband Steve. Provided photo