ROCK ISLAND — With St. Pius X Church filled with family, friends and current and former parishioners from as far away as Louisiana and Chicago, Msgr. Mark Merdian thanked God for his 25 years of priestly ministry on June 3.

“I love being a priest, if you can’t tell,” he told them with a smile. “How grateful I am to God that you, friends and family, many parishioners who have joined me on my journey in many assignments, have accompanied me with your children, with your families, and will continue to do so, hopefully for at least another 20 years — maybe.”

It wasn’t the first time those present would respond with laughter or let Msgr. Merdian know that they were grateful for him, too. 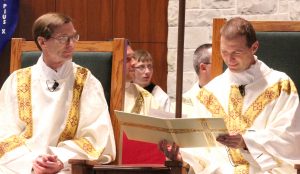 Msgr. Merdian smiles as he reads the song that was written for his 25th anniversary by Father J. Michael Joncas, a well-known composer of liturgical music. He shares the moment with his brother, Deacon John Merdian of Chillicothe, as “O Sacrament Most Holy” is sung for the first time. (The Catholic Post/Jennifer Willems)

Among the special moments planned for him was when the St. Pius X Choir and Jordan Catholic School Choir led the assembly in singing a song commissioned for their pastor’s milestone anniversary. “O Sacrament Most Holy” was written by Father J. Michael Joncas, composer of many beloved hymns for Mass, including “On Eagle’s Wings.”

The verses are based on the “Anima Christi” prayer, with the refrain taken from the hymn “O Sacrament Most Holy.” It is something Msgr. Merdian often sings at daily Mass, according to Barbara Roedel, director of adult faith formation and liturgy coordinator at St. Pius X.

She said Father Joncas agreed to write the song at the beginning of last December and sent it to her by the first week in January.

“Father Joncas wrote that after learning that the celebration was June 3, he felt a need to fulfill the commission quickly so the parish would have enough time to practice and learn the new piece by the time of its first liturgical use,” Roedel told The Catholic Post.

At the reception that followed Mass, she told Msgr. Merdian and his well-wishers that GIA Publications had accepted the song for publication and recording. Father Joncas sent word that it would be out by the end of the month.

The other surprise prepared by parishioners was a quilt with 72 squares made by parish families and organizations. There were eight squares left after the quilt was assembled, so the committee made two pillows. 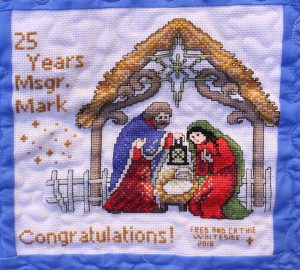 A counted cross stitch quilt square prepared by Fred and Cathie Whiteside shows the detail that went into making the anniversary quilt. (The Catholic Post/Jennifer Willems)

All parishioners had an opportunity to sign the back of the quilt over two weekends in April.

The project was organized and completed by Karen Boyle, Kate Elliott, Rita Kirk, Carol Koester and Karen Wieland. Msgr. Merdian knew about it, but saw it for the first time at the reception.

“It’s beautiful,” he said, pointing to several of the squares. “Thank you very, very much.”

“There was such a variety,” Kirk said. “Nothing seemed to go together, but once you laid it out it all went together. It’s like us — we’re all different, but we go together.”

Msgr. Merdian’s sister, Mary Klug, carries a banner showing where he has served. It was made by parishioner Pat Vogel. (The Catholic Post/Jennifer Willems)

At the reception in McCarthy Hall, a slideshow with photos from Msgr. Merdian’s childhood and ministry was projected on a large screen. A camcorder was available so people could record their greetings and words of congratulations and thanks.

After the reception, there was a dinner for Msgr. Merdian’s family and priest-friends.

Roedel emphasized that everybody had been involved in the planning for this day.

“It truly is a celebration from the parishioners to Monsignor and that’s why it’s a good celebration,” she said.

Roedel added that it gave the parish an opportunity to celebrate all priests and the anniversary of their ordinations.

“The priests are always celebrating different aspects with us — baptisms, weddings, funerals. They are with us in the most intimate times of our lives and we never have the opportunity to celebrate with them,” she said. “This was an opportunity for St. Pius parishioners to celebrate with Msgr. Merdian.”