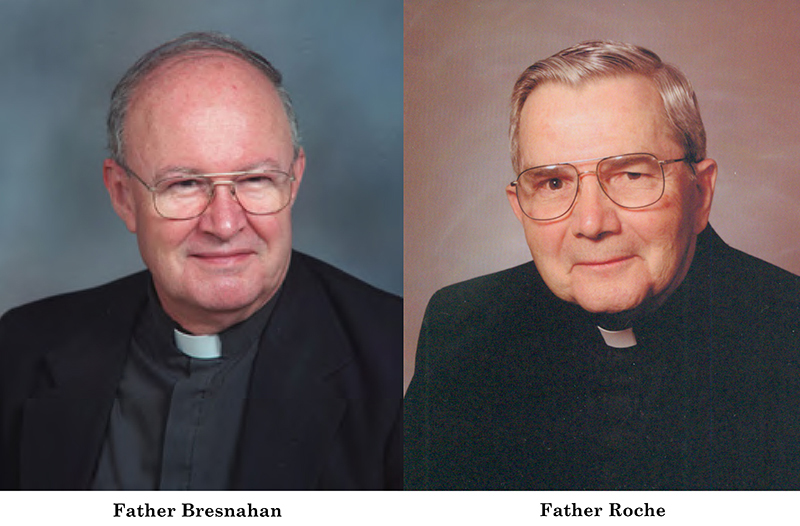 For two senior priests of the Diocese of Peoria, 2018 brings the 60th anniversary of their ordination to the priesthood.

Father Richard F. Bresnahan of Silvis and Father David F. Roche of Pontiac were ordained by Bishop William E. Cousins on June 1, 1958, at St. Mary’s Cathedral in Peoria. Father Raymond M. Lukoskie and Father Francis J. Ryan, who were ordained with them, are deceased.

The jubilarians do not have plans for a celebration at this time.

This spring, The Catholic Post spoke with Father Bresnahan and Father Roche about their assignments, their ministry as senior priests, and what has brought them joy in their six decades of priesthood. Their responses, as well as where mail may be sent, follow.

Connecting people — to God and to those around them — has been the focus of Father Bresnahan’s long ministry. Two important aspects of that have been celebrating the sacraments, especially the Eucharist, and promoting Catholic social teaching throughout the diocese.

“The Eucharist is such a powerful thing, God’s presence and activity, and it connects us with the rest of the world,” he said during a visit to his cozy apartment at the New Perspective Senior Living Community in Silvis. “It just shows us and encourages us to be more fully the body of Christ. . . . It has always been a very powerful thing for me.” 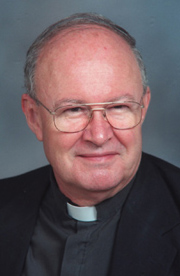 “I think people thought Catholic social teaching means giving a donation to the poor, but it means so much more than that. . . . This is not an add-on. It’s at the heart of what Jesus taught.” — Father Bresnahan

He continues to share that love by celebrating Mass each Thursday for the other residents at New Perspective, and provides a priestly presence the rest of the week. Father Bresnahan also assists at parishes in the Quad Cities as he is able.

Getting involved in JustFaith and helping people embrace the Catholic Church’s teaching on social justice is something for which he is also grateful.

“It just awakened me to the fact that this is very, very much at the core of Jesus’ teaching. I think more and more people know that now,” Father Bresnahan said of JustFaith, which offers programs to help people build “a more just and peaceful world.” He got involved after hearing founder Jack Jezreel speak in Davenport, Iowa.

He and Msgr. Doug Hennessy would go on to serve as co-moderators of Catholic social teaching for the Diocese of Peoria.

“It’s essential to a good, full Catholic understanding,” Father Bresnahan said. “I think people thought Catholic social teaching means giving a donation to the poor, but it means so much more than that. I think we have discovered — partly because of our pope — that this is not an add-on. It’s at the heart of what Jesus taught.”

Pointing to Pope Francis’ visit to the United States in 2015, Father Bresnahan noted that the Holy Father went to a prison and visited a school in a poor area, and is constantly seen reaching out to the poor, those who are hungry, and children in orphanages.

“What a marvelous example to have,” Father Bresnahan said. “I’m very grateful for him and the example he gives us.”

After ordination, Father Bresnahan served as parochial vicar at St. Mary, Moline, until 1963, when he was assigned to St. Cecilia, Peoria. He was named pastor at St. John, Woodhull, in 1971 and co-pastor at St. Columba, Ottawa, in 1974.

Father Bresnahan welcomed the Second Vatican Council, with its emphasis on “full, conscious and active participation” in the liturgy. It also brought people to his door asking for spiritual direction, although that wasn’t a term anyone used at the time.

He asked Bishop Edward O’Rourke for permission to get training for that and was granted a sabbatical in 1978.

When he returned from Ministry Training Services in Denver in 1979, Father Bresnahan was sent to Sacred Heart, Moline, to serve as co-pastor, and to Christ the King, Moline, as pastor. While there, he oversaw construction of the church.

“We built the church,” he emphasized. “I’m very proud of that. I think it’s a wonderful church building. Father (Donald) Levitt has done a great job in building up the community there.”

His final assignment was to St. Maria Goretti, Coal Valley, where he served as pastor from 1994 until he was granted senior status in 2002.

Father Bresnahan said one of the greatest lessons he has learned is that priestly ministry is not “a solo act.”

“We are a priestly people, a priestly community of believers. We preside and that is critical and essential, but if we’re not involving the community I think we’re missing the boat,” he told The Post. “Priestly ministry is a community action. It’s not just me.”

When he was in the seventh grade at St. Bernard School on Peoria’s East Bluff, Father Roche asked if he could to attend the ordination at St. Mary’s Cathedral that year. Looking out over the men lined up in the sanctuary from his seat in the St. Thomas More Chapel, he thought to himself, “I belong there.”

That would happen two more times — once during a visit to St. Bede Abbey in Peru, and again when he traveled to St. Mary of Lake Seminary in Mundelein with the Don Bosco Club from Spalding Institute in Peoria.

“For the third time and the last time I said, ‘That’s where I belong,’” Father Roche recalled. “It was as simple as that.” 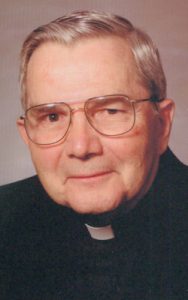 He said he had a good example in his uncle, Father Keithen Roche, with whom he spent time at St. Ann in Toluca during summer vacations.

After he graduated from Spalding in 1950, Father Roche was sent to Benedictine College in Atchison, Kansas, for two years, and then returned to St. Mary of the Lake Seminary, this time as a seminarian for the Diocese of Peoria. He earned a bachelor’s degree in philosophy in 1954 and a master’s degree in religion in 1958.

Father Roche said he had a very “ordinary” priesthood with good assignments that allowed him to work with many wonderful priests.

“I was very fortunate to have good help, from both Religious and lay people,” he said, adding that while he didn’t oversee any building projects he was a “fixing up guy.”

“Wherever I went I had a lot of cheerleaders — people who were supportive and helped out,” according to Father Roche.

He served as parochial vicar at Sacred Heart in Moline in 1958, and was assigned to Immaculate Conception in Spring Valley in 1965 and St. Patrick in Washington in 1969.

Father Roche was named chaplain at St. Margaret’s Hospital in Spring Valley in 1970. He would also minister as chaplain at Mercy Hospital in Urbana from 1973 to 1981, and at St. James Hospital in Pontiac from 1991 until being granted senior priest status in 2003. He said he enjoyed the opportunity to work with three congregations of women religious in those assignments — the Sisters of Mary of the Presentation in Spring Valley, the Servants of the Holy Heart of Mary in Urbana, and The Sisters of the Third Order of St. Francis in Pontiac.

Father Roche grew up in a medical family — his father, William, was a doctor and his mother, Jessie, was a nurse — so hospital chaplaincy came naturally to him. He started to alternate between that ministry and parish ministry after his mother had a series of strokes.

Father Roche brought her with him to his various assignments and was involved in her care for 23 years.

“I never regretted a day of it,” he told The Post. “I often thought to myself that before I went to the seminary she looked after me for 25 years.”

Father Roche doesn’t consider himself to be retired, since priestly ministry is a lifetime commitment. He continues to rent a house from OSF HealthCare Saint James-John W. Albrecht Medical Center in Pontiac and celebrates Mass at the hospital five days a week, as well as hear confessions. Always a morning person, he often rises early enough to pray the Liturgy of the Hours and read the Scriptures of the day so he can offer a short homily for the hospital workers, patients and visitors.

He stays limber by doing three things every day — things he encourages others to do:

“Those three facets cover it all,” Father Roche said. “If you do that, there is always something day by day by day to look forward to. Something to do. Something uplifting. . . . It doesn’t have to be dramatic, just something that’s meaningful to you.”

As he looks back on the last 60 years, the man who always wanted to be a priest says he found that and more.

“To this day I say, ‘Lord, I made the right choice,’” Father Roche said.