Visitation, funeral Mass on evening of May 29 for Sr. Concepta Marie Nudo, OSF 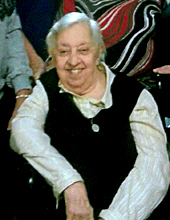 WEST PEORIA — Sister Concepta Marie Nudo, OSF, a member of the Sisters of St. Francis of the Immaculate Conception for 70 years, died on May 25, 2018, at Mother of Peace Home here. She was 91.

Visitation will be held from 4 to 7 p.m. today, May 29, at Immaculate Conception Convent, 2408 W. Heading Ave. A Mass of Christian Burial will follow immediately, with Father Martin Mwongyera as the celebrant and Father William Miller as the homilist.

Burial will take place on Wednesday, May 30, in St. Mary’s Cemetery, 421 N. Sterling Ave., in West Peoria. Graveside services are planned for 9:30 a.m.

The daughter of Alexander Samuel and Congetta (Sergo) Nudo, Josephine Marie Nudo was born Nov. 1, 1926, in Springfield. She entered the Sisters of St. Francis of the Immaculate Conception, also known as the Heading Avenue Franciscans, on Sept. 8, 1944, and professed vows on June 15, 1947.

In her retirement years, Sister Concepta Marie enjoyed making thousands of Italian pizzelle cookies, which she gave to family and friends.

Preceded in death by two sisters, Eileen Viele and Mary Tolan, and three brothers, Sam Nudo, William Nudo and John Nudo, Sister Concepta Marie is survived by many nieces and nephews and her Franciscan Sisters, with whom she shared life for nearly 71 years.