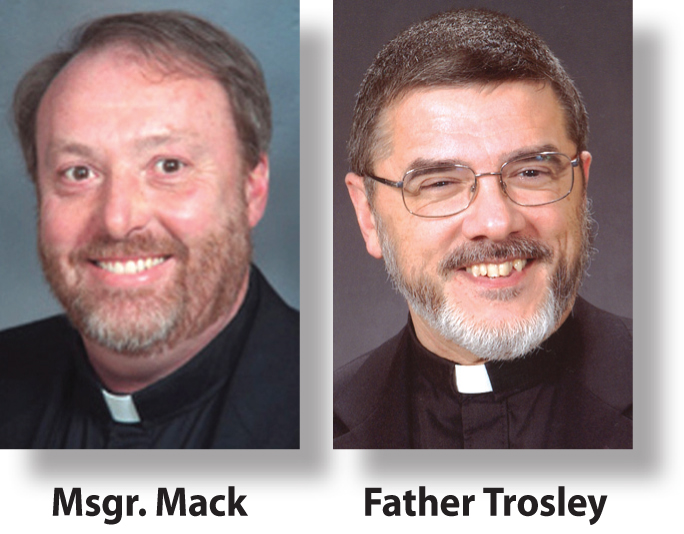 Msgr. Thomas Mack and Father Anthony Trosley are observing their 40th anniversary of ordination to the priesthood this year and the celebrations have already begun.

The pastor for all of the Hancock County Catholic parishes, Father Trosley will continue the celebration at an open house on May 27 at Villa Maria Rectory, 190 N. Wells St., in Nauvoo. It will be held from 2 to 5 p.m.

Msgr. Mack will have a Mass of Thanksgiving at 3 p.m. on Sunday, June 10, at Immaculate Conception Church in Monmouth, where he is the pastor. A potluck will follow immediately at the Knights of Columbus Hall.

Msgr. Mack is also the pastor at St. Patrick in Raritan and St. Theresa in Alexis, and chaplain at the St. Augustine Newman Center at Monmouth College.

Both priests were ordained by Bishop Edward O’Rourke on May 27, 1978, at St. Mary’s Cathedral in Peoria.

Msgr. Mack has ministered as parochial vicar at St. Malachy in Geneseo, Sacred Heart in Moline, and Resurrection in LaSalle. As administrator or pastor he has served at St. Mary in Keithsburg, St. Therese in New Boston, and St. Andrew in Oquawka; St. Patrick in Ransom and St. Mary in Grand Ridge; Holy Family in Lincoln, St. Mary in Atlanta, and St. Columba in Mason City; and St. Mary in Pontiac, St. John in Cullom, and St. Joseph in Flanagan.

He started his current assignment in 2012.

Msgr. Mack was named a Chaplain to His Holiness in 2003 with the title of monsignor. This year he was honored as the Distinguished School Pastor by the Office of Catholic Schools.

Father Trosley’s ministry has included service as parochial vicar at Holy Cross in Champaign, St. Thomas the Apostle in Peoria Heights, and St. Paul in Danville, and as assistant chaplain at OSF HealthCare Saint Francis Medical Center in Peoria. He has been pastor at St. Thomas in Philo and Immaculate Conception in Bongard, Holy Family in Oglesby, and St. Matthew in Champaign, and was administrator at St. Patrick in Raritan.

He has ministered to the Hancock County Catholic Community since 2003, and was named Macomb Vicar Forane in 2017.

Father Trosley was in the Dominican novitiate from 1981 to 1985, and worked as a hospital chaplain and parish administrator in Denver in 1986. He was spiritual director at Immaculate Heart of Mary Seminary in Winona, Minnesota, from 1992 to 1995.

EDITOR’S NOTE: This story was part of a 20-page section in the May 27 issue of The Catholic Post honoring all jubiliarian priests and consecrated women.