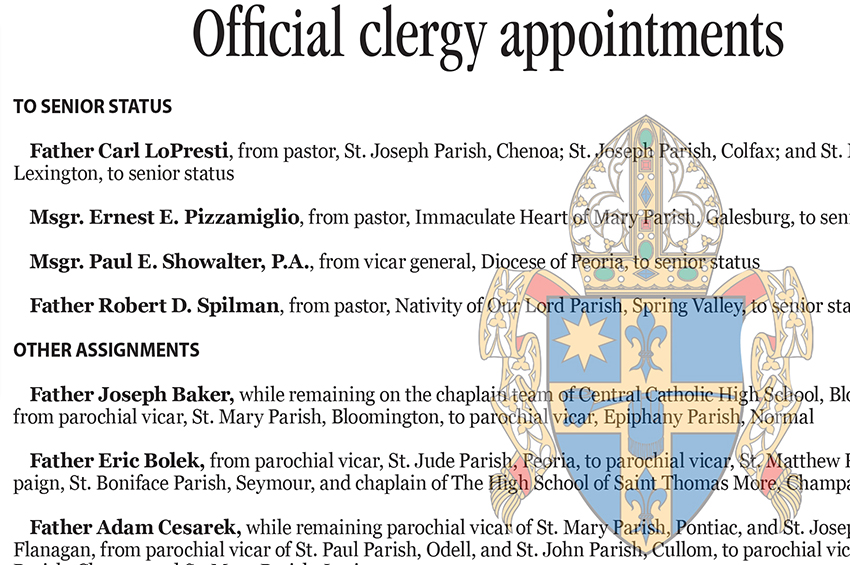 The changes will result in a dozen parishes receiving new pastors and two high schools — Alleman in Rock Island and The High School of Saint Thomas More in Champaign — getting new chaplains.

Among the appointments are moves to senior status for four priests — Msgr. Paul Showalter, P.A., Msgr. Ernest Pizzamiglio, Father Carl LoPresti, and Father Robert Spilman. Those moves, along with profiles of each of the retiring priests, were featured in the May 13 issue of The Catholic Post.

Named to succeed Msgr. Pizzamiglio as pastor of Immaculate Heart of Mary Parish in Galesburg is Father William Miller, who is well known in the Galesburg community. Father Miller has served as administrator or pastor of Corpus Christi and St. Patrick parishes in the city, as well as Sacred Heart Parish in Abingdon, since 2002. He will continue as pastor of those faith communities as he takes on leadership at Immaculate Heart of Mary.

He will be assisted by Father John Baptist Uwigaba, who will become parochial vicar of the four parishes after a brief time in that role at Mary, Our Lady of Peace Parish in Orion and St. Maria Goretti Parish, Coal Valley.

The parishes in Orion and Coal Valley will receive a new pastor following the death on April 1 of Father James DeBisschop. The new pastor is Father Anthony Ego, who has served as pastor of St. Joseph Parish, Marseilles, and St. Patrick Parish, Ransom, for four years. Ordained in 1985, Father Ego was previously pastor of parishes in Elkhart, Mt. Pulaski, Middletown, Monticello, Bement, Chillicothe, and Milan.

Succeeding Father Ego in Marseilles and Ransom will be Father Ghislain Inai, a priest of the Society of African Missions who last year became pastor of St. Patrick Parish, Seneca; St. Mary Parish, Grand Ridge, and St. Theresa Parish, Earlville. Father Inai will continue to guide those faith communities as well, and will be assisted at all five parishes by Father Augustin Kassa, SMA.

Three priests currently serving as temporary parish administrators have been named pastors of those parishes, including:

Meanwhile, Father Scott Potthoff, parochial vicar for the past two years at St. Pius X Parish In Rock Island, has been named administrator of The Nativity of Our Lord Parish in Spring Valley, which has been guided since its establishment in 2013 by Father Spilman.

A realignment is planned for parishes in Livingston County and northern McLean County following the move to senior status of Father LoPresti.

Father Chris Haake, pastor of St. Patrick Parish in Dwight, will also now serve as pastor of St. Paul Parish, Odell, which since 2013 had been under the care of Father Sabel.

The new chaplain of Alleman High School will be Father Matthew Hoelscher, who since his ordination in 2014 has been chaplain of The High School of Saint Thomas More in Champaign as well as parochial vicar of St. Matthew Parish, Champaign, and St. Boniface Parish, Seymour.  At Alleman, Father Hoelscher succeeds Father Jeremy Freehill, who will continue as coordinator of Catholic ministries at Augustana College and add duties as parochial vicar of St. Pius X Parish, Rock Island.