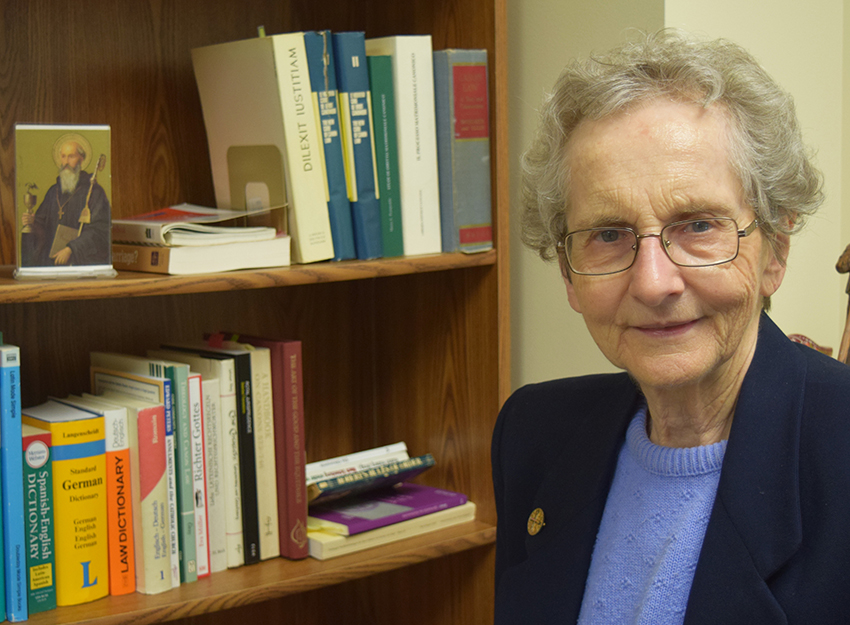 Sister Marianne Burkhard, OSB, former director of the Diocesan Tribunal and a longtime judge in marriage cases, is pictured in her office at the Spalding Pastoral Center in Peoria. She will retire to St. Monastery in Rock Island on May 31. (The Catholic Post/Tom Dermody)

After nearly 25 years of service and involvement in more than 1,000 marriage cases, Sister Marianne Burkhard, OSB, will retire from the Diocesan Tribunal on May 31.

“My life has been totally unpredictable but wonderfully meaningful,” said Sister Marianne, a canon lawyer who guided the Tribunal as its first non-clergy director for a dozen years and has served as a judge since 1994.

Indeed, before she entered the Sisters of St. Benedict in 1987 at the age of 48, Sister Marianne had already:

But while discerning her religious vocation, there was one other experience Sister Marianne needed.  She had to become Catholic.

Guided into the church by Father Doug Hennessy, then co-pastor of St. Patrick Parish in Urbana, Sister Marianne had further spiritual direction from a Benedictine Sister while serving as a visiting professor at the University of Notre Dame.

“I had always been fascinated with the Catholic Church and with monasteries,” said Sister Marianne, whose spiritual direction continued when she returned to central Illinois under the guidance of Sister Audrey Cleary, OSB.

“My life has been totally unpredictable but wonderfully meaningful.” — Sister Marianne

When she entered the Benedictine community, making her first profession in 1990, friends wondered how she would put her extensive education to use. Sister Marianne trusted that “I will do something good.”

It wouldn’t take long to find out that new path.

After two years of service as a coordinator of religious education in Spring Valley and DePue, Sister Marianne accepted an invitation from Bishop John J. Myers to study canon law. She left to earn a licentiate from St. Paul University in Ottawa, Canada, and was appointed to the Tribunal as a Defender of the Bond in August of 1993.

This new chapter of her life — promoting healing for persons who have experienced failed marriages by helping them navigate the law of the church — would repeatedly leave her “in awe of the resilience of the human spirit.”

“A HUMAN FACE ON CANON LAW”

“I am often asked how I can deal with all this,” she wrote in her community’s newsletter in 2016. “Yet, I am meeting these people after they have lived through the worst, have found new strength, found faith or deepened it, and very often also are now in truly loving relationships. They may have remarried outside the Church, but they deeply desire to live fully within the Church.”

Realizing there are many misunderstandings or misconceptions regarding the church’s annulment procedures, Sister Marianne strove to “put a more human face on canon law” by traveling throughout the diocese in her early years with the Tribunal, giving talks at parishes about annulments on Friday nights and then staying on Saturday as individuals came forward to ask questions and give preliminary details about their cases.

“They’ve had such hard lives,” said Sister Marianne of many of the petitioners. “It’s so heartening to see how people can deal with their difficulties and they come out OK, more than OK. It gives you a lot of wisdom and a whole lot of hope for the church,” she added, expressing appreciation at the openness and honesty repeatedly shown to her during interviews despite difficult subject matter.

“In sensing the help of the Holy Spirit, I’m in awe of how people are able to find God, perhaps for the first time, or again after having ‘lost’ God,” she wrote in 2016. “It is a wonderful gift and privilege when they share with me their richer understanding of our merciful God, and the solace they now discover in the treasures that the Catholic Church has to offer.”

Sister Marianne is happy that there have been “continual improvements” in the annulment process through the years, both in terms of speed and thoroughness. And she thanked the many who have mentored her, including the late Msgr. George Carton, Msgr. Joseph Zube, and Msgr. Clarence Hettinger.

Bishop Daniel R. Jenky, CSC, and the diocesan staff will have a chance to thank Sister Marianne for her years of service when they gather for a luncheon in her honor on May 31.

“Bishop Jenky is deeply grateful to Sister Marianne and her presence in the Curia will be missed,” said Patricia Gibson, diocesan chancellor and moderator of the Curia.

Sister Marianne, whose life story was told along with those of 14 other Swiss women who emigrated to America in the 2009 book “Westward,” will return to St. Mary Monastery in Rock Island where she will continue with yet another interest — translating books and texts.

“That has become a fascination for me,” said Sister Marianne, who can translate from several languages including Latin, French, and German — even old German calligraphy, as taught to her in sixth grade. She will also assist with the monastery archives, tapping into her love of history.

“I can say everything I’ve learned, I’ve used,” she says.

And the diocese — including the more than 1,000 she assisted by bringing the wisdom from her wide experiences to marriage cases — has been the beneficiary.