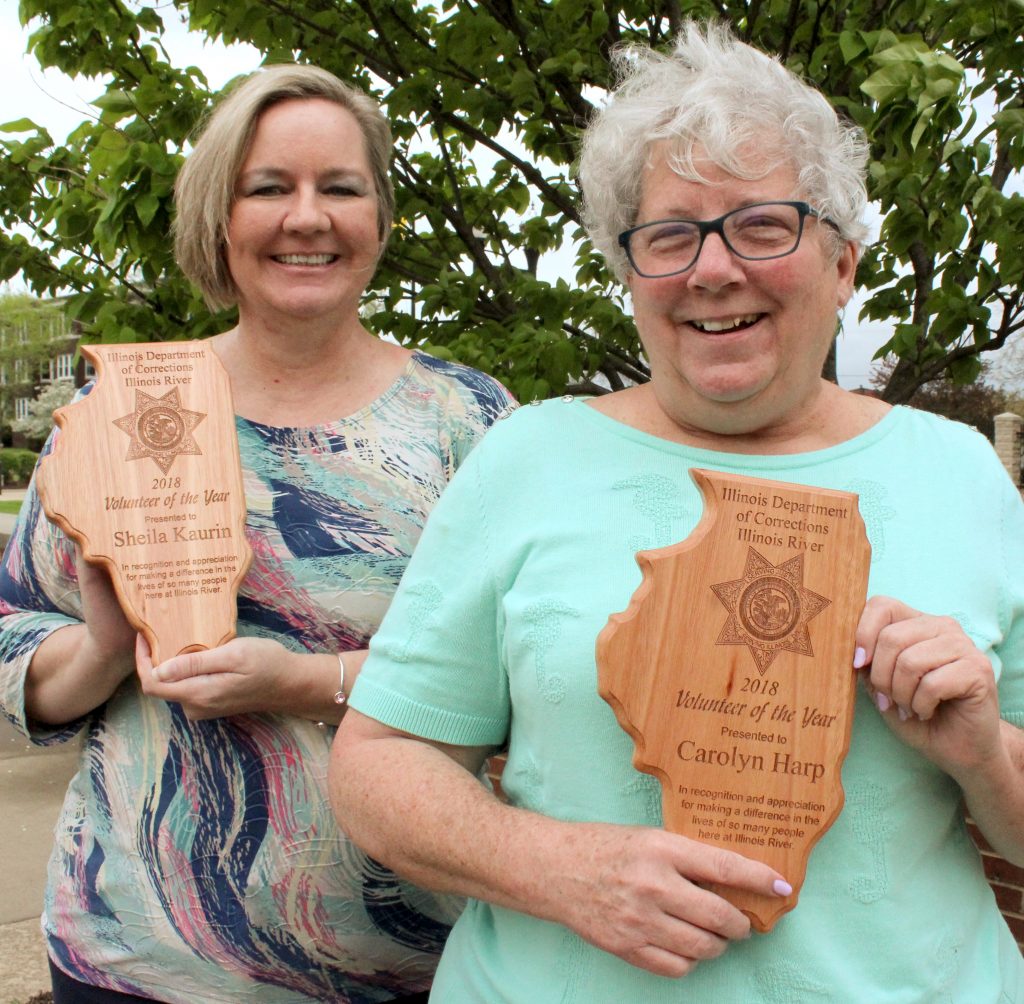 CANTON — Prison ministry isn’t for everyone, but Sheila Kaurin of Morton and Carrie Harp of Canton feel nothing but gratitude that they are able to take Cursillo into the Illinois River Correctional Center and share faith with the inmates there.

For their kindness, compassion and dedication, Kaurin and Harp were named co-recipients of the facility’s Volunteer of the Year award. They were honored recently at a dinner that was made and served by the men.

This is the first time two people at the same facility have shared the award.

“They have many admirable talents and the personal qualities of patience, flexibility, and positive attitude to move programs forward, no matter what hurdles arise,” he said. “They have charisma, but are not the charismatic figures that are always out front. Instead, they will lead or work behind the scenes, doing whatever it takes to make things right.”

He added that without them, and people like them, the Canton prison would not have the programs it does.

Their work with Cursillo helps to fill a gap in the lives of the inmates, some of who have been truly forgotten.

Deacon Joe LaHood, spiritual director for prison ministry in the Diocese of Peoria, described Kaurin and Harp as “servant leaders.” Their work with Cursillo helps to fill a gap in the lives of the inmates, some of who have been truly forgotten, he said.

While they said the award was a nice surprise, both women tried to downplay it.

“I don’t do this to be recognized with an award for what I do,” said Kaurin, a longtime member of Blessed Sacrament in Morton. “I do it because I love doing this and I love working with this ministry.”

Harp, a member of St. Mary in Canton, agreed, adding that it isn’t something that anyone does alone.

Cursillo is a Spanish word meaning “short course” and the weekend experiences are meant to be a short course in Christianity.

Kaurin made her Cursillo weekend in April 2003 and soon got involved in a variety of roles. After being on four teams to present the weekend for others, she took the next step in 2007 by serving on a team going into the Pekin Federal Prison Camp for women.

“It was God pulling at my heart,” Kaurin told The Post. “This was something he wanted me to do.”

The following year she began her long involvement with the Canton prison, which houses men. Cursillo is presented at least once and often twice a year there. Kaurin has been on the team for at least a dozen in the last decade.

For the last six or seven years she has served as the board adviser for Cursillo at the Illinois River Correctional Center, which makes her the main liaison between the prison and Cursillo. That includes making sure Chaplain Bloyd knows who is coming in, helping volunteers with the credentialing process, and letting them know about training.

The experience with the inmates has been good, she said.

“A lot of them talk about how Cursillo changed their life and made them stronger in their own religion,” Kaurin explained. “Our sole purpose for being there is to help them find a relationship with God and with Christ, and if they already have one, to help them deepen that relationship.”

“IT’S BEEN A BLESSING”

Harp made her Cursillo weekend in 2002, but wasn’t able to do much because she was living in the St. Louis area. She eventually moved back to Canton and after retiring in 2013 decided the time was right to get involved.

It was her brother, Steve Conklin, who invited her to serve on a prison Cursillo team at the Illinois River Correctional Center. A longtime volunteer and leader there, he currently serves as board adviser for Cursillo at the Kewanee Life Skills Re-Entry Center.

Harp declined the invitation three times because she wasn’t sure what she could bring to the ministry, but Conklin told her, “You’ll never regret this decision. It’s such a rewarding experience.”

“He was absolutely correct,” she said.

“The thing that amazed me is we were met with such respect by the men, who not only wanted to be there but were amazed that we would give our time over a whole weekend to be with them,” Harp explained.

She also goes to the prison each week with Father Daniel Ebker, pastor at St. Mary in Canton, who presents a class for the men and then celebrates Mass.

On a diocesan level, Harp serves on the steering committee for Cursillo and is the treasurer.

Deacon LaHood said the award is a cause for joy beyond the Canton Cursillo community.

“It gives affirmation to the entire Cursillo community,” he said. “It is recognition at a very high level by the state.”