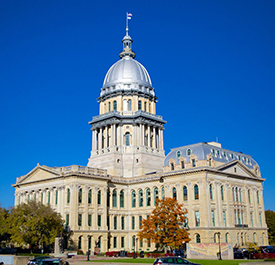 The Illinois State Capitol in Springfield.

Saying “you cannot teach killing is wrong by killing,” the Catholic Conference of Illinois expressed alarm over Gov. Bruce Rauner’s proposal May 14 to reinstate the death penalty in Illinois for mass killers and those who murder law enforcement officers.

Gov. Rauner proposed the change as part of his rewrite of a gun control bill. According to published reports, the death penalty provision would create a new category of homicide called “death penalty murder.” Guilt must be determined “beyond all doubt.”

Following is the full text of the Catholic Conference of Illinois statement issued on Monday, May 14:

“We are distressed and alarmed by Gov. Bruce Rauner’s call for the reinstatement of the death penalty in any way, shape or form. His call to put to death individuals convicted of mass shootings or the fatal shooting of a law enforcement officer under proof of “beyond all doubt” instead of “beyond a reasonable doubt” is simply parsing words. You cannot teach killing is wrong by killing. We are all God’s children, and our first — and primary — right to life must always be protected and unconditional.”

The Catholic Conference of Illinois was created in 1969 to serve as the public policy voice of the Illinois bishops and the six dioceses of the state: Belleville, Chicago, Joliet, Peoria, Rockford and Springfield-in-Illinois.