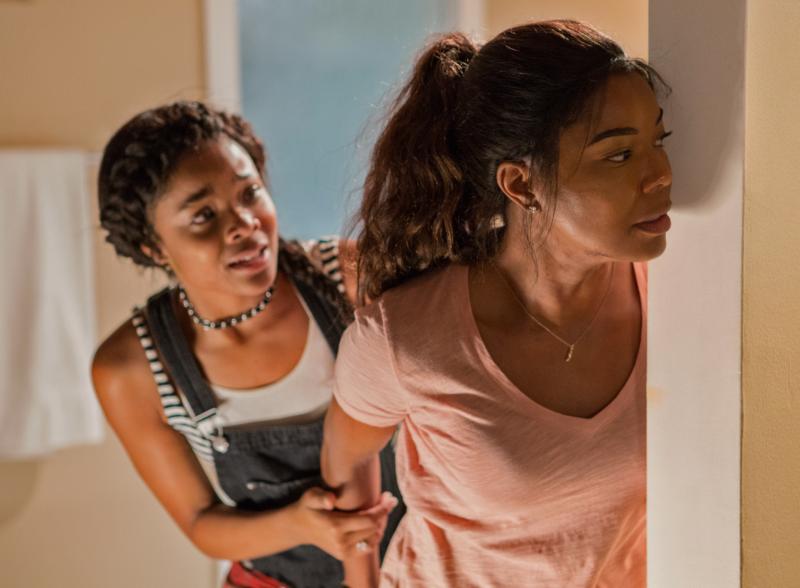 Ajiona Alexus and Gabrielle Union star in a scene from the movie "Breaking In." The Catholic News Service classification is L -- limited adult audience, films whose problematic content many adults would find troubling.(CNS/Universal Pictures)

Visiting her recently deceased father’s isolated country estate to prepare it for sale, a Midwestern mom (Gabrielle Union) finds her maternal instincts put to the test when a group of gangsters (led by Billy Burke) out to purloin the vast sum of cash stored in the fortress-like house’s hidden safe, take her teen daughter (Ajiona Alexus) and preteen son (Seth Carr) hostage inside the home and lock her out of it. What ensues, under James McTeigue’s direction, is a less-than-credible contest of wills that becomes increasingly nasty as it approaches a conclusion calculated to appeal to viewers’ worst instincts.

Much harsh, gory violence, including the preliminaries of a sexual assault, a few uses of profanity, at least one milder oath, a single rough and numerous crude terms, mature references. The Catholic News Service classification is L — limited adult audience, films whose problematic content many adults would find troubling. The Motion Picture Association of America rating is PG-13 — parents strongly cautioned. Some material may be inappropriate for children under 13.