‘Guardians of the family’: Catholic men urged to follow example of St. Joseph 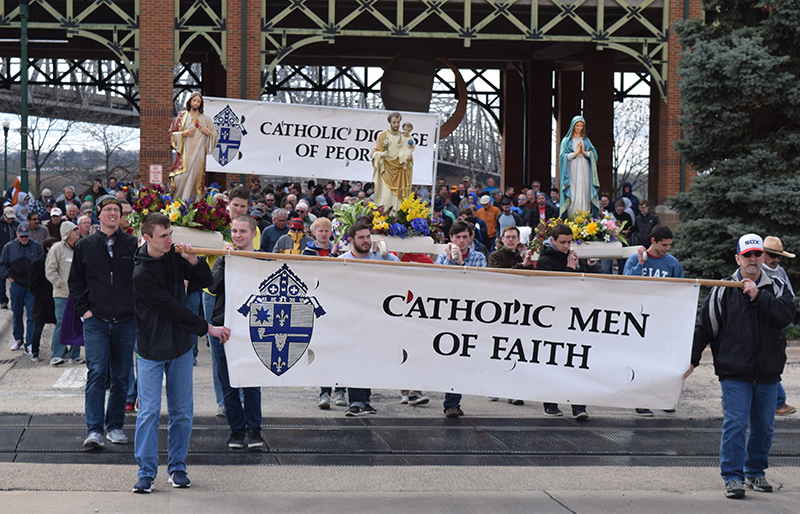 Hundreds of Catholic men from throughout the Diocese of Peoria begin the mile-long march through downtown Peoria to St. Mary's Cathedral on April 28 during "A Call to Catholic Men of Faith." (The Catholic Post/Tom Dermody)

Before and after prayerfully walking through the streets of downtown Peoria on April 28, hundreds of Catholic men from across the diocese were urged to turn to St. Joseph “to discover what it means to be a real man, a real father, a real leader.”

“We men are called to live his example,” said Devin Schadt in an opening address to those gathered on the banks of the Illinois River at the start of the 15th annual “A Call to Catholic Men of Faith.” He outlined four pillars of St. Joseph’s spirituality and repeatedly called the men to be “guardians of the family” as St. Joseph was to the Holy Family. 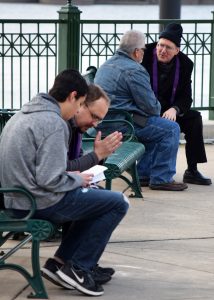 Father James Pankiewicz and Father John Verrier were among several priests hearing confessions on the banks of the Illinois River prior to the Men’s March. (The Catholic Post/Tom Dermody)

A member of St. Mary Parish in Rock Island, Schadt is an author and co-founder of the Fathers of St. Joseph, a confraternity of men striving to revitalize fatherhood by following the wisdom of the foster father of Jesus.

An hour later — after the men had completed a mile-long walk to St. Mary’s Cathedral for a Mass celebrated by Bishop Daniel R. Jenky, CSC — they were again urged to emulate St. Joseph.

In his homily, Father John Steffen noted that while St. Joseph is not quoted in Scripture, he demonstrated an ability to “place his own troubles into the hands of the Almighty and trust in a Divine Plan that is higher than his own.” Father Steffen is pastor of St. Mary Parish in El Paso and chaplain of the St. John Paul II Newman Center in Normal. (For the full text of Father Steffen’s homily, click here.)

The Saturday morning began with several priests offering the sacrament of reconciliation at outdoor stations set up along the riverfront. As the men gathered near the Gateway Building at the foot of Hamilton Street, coffee and doughnuts were served by the Men’s Club of Holy Family Parish, Peoria.

The crowd was then welcomed by Deacon Michael Schallmoser of St. Philomena Parish, Peoria, who serves on the event’s planning committee. Deacon Schallmoser drew applause as he thanked Bishop Jenky for his “bold leadership,” including a passionate homily at an Irish festival in 2003 that inspired the first Men’s March. In that homily, the bishop called on Catholics to rise up and defend the Catholic faith when it is attacked in today’s culture. It led to a grassroots effort to invite Catholic men to make a public stand in defense of faith, family, and the priesthood each year on or near May 1, the feast of St. Joseph the Worker.

“And thank you, Catholic men of the Diocese of Peoria, for making the decision to come out from the comfort of your homes today and stand in witness of the love and dedication you have for our Lord Jesus Christ and reflect on what it means to be a father,” said Deacon Schallmoser. 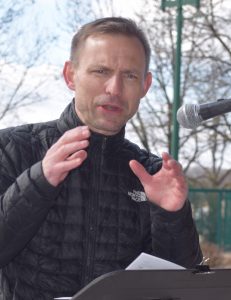 Devin Schadt speaks to the crowd prior to the Men’s March. (The Catholic Post/Tom Dermody)

Rally speaker Schadt led that reflection by reminding the men of the vital role of fatherhood in God’s plan for the family and the church.

“At work, you are replaceable,” he said bluntly at one point. “At home, you are irreplaceable.”

Those with the vocation of fatherhood — whether within the family or spiritual fatherhood — are called to carve a path for themselves and others through “this sinful world” to heaven, he said.

But Schadt said that Satan will try to keep men from fulfilling their vocation through temptation, intimidation, distraction, and isolation. To combat that, Schadt urged the men to embrace four pillars of St. Joseph spirituality, namely:

Following Schadt’s talk, the men walked through downtown. With a police escort, they were led by Bishop Jenky riding in a golf cart; identifying banners for “A Call to Catholic Men of Faith” and the Catholic Diocese of Peoria; and statues of the Sacred Heart of Jesus, St. Joseph holding the Child Jesus, and the Blessed Virgin Mary carried by college students from Newman Centers at Bradley University and Illinois State University.

At the cathedral, they were greeted by praise music provided by Men of Faith, an all-male chorus from Blessed Sacrament Parish in Morton. The Mass opened with a procession of priest concelebrants as the men robustly sang “Jesus Christ is Risen Today” accompanied by brass fanfare and Jon Kroepel on the cathedral organ.

Bishop Jenky asked the men, especially in the Easter season, to “remember how good our God is and more and more try to surrender our lives to the Father’s will.” 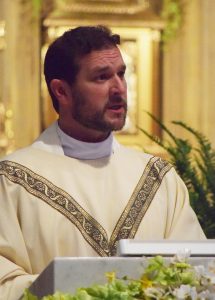 Father Steffen delivers the homily during the Mass at “A Call to Catholic Men of Faith.” (The Catholic Post/Tom Dermody)

In his homily, Father Steffen called to mind a poem by renowned Illinois writer Carl Sandburg — a Galesburg native — that centers on a father giving advice to a son approaching manhood. The father describes two worlds, one that is difficult and would require the son to be strong as steel, and another world view that is like “soft loam” that calls for gentleness.

The father in the poem eventually tells the son to find time to be alone, “because it’s in those silent rooms where you will make your final decisions.”

“St. Joseph was a man who could seek solitude and make his way into the silent room of his soul where God spoke to his heart through the ministering voice of angels,” said Father Steffen.

Noting that in St. Joseph’s workshop not only things were built but “a Son was being built up into a man,” Father Steffen said that Jesus, the “Master Craftsman,” awaits to help us grow in wisdom and strength.

“There is a silent chamber in the soul of each one of us,” Father Steffen told the men. “And if we faithfully enter into that silent chamber every day of our life, we will find there is a Master Craftsman within, and He is standing there at his workbench, and He is plying his trade.”

“PASSING ON THE FAITH”

At the end of Mass, Bishop Jenky blessed medallions commemorating the event. The medallions were distributed as the men made their way from the cathedral to the Spalding Pastoral Center for lunch and a time of fellowship.

Bishop Jenky rides in a golf cart driven by Deacon Mike Schallmoser in leading hundreds of men through downtown Peoria toward St. Mary’s Cathedral during “A Call to Catholic Men of Faith” on April 28. (The Catholic Post/Tom Dermody)

Among them were Joel Skalet and Andy Eberle, members of St. Edward Parish in Chillicothe. Both brought along two sons ages 7 and 5. And both found the Mass with Bishop Jenky to be the highlight of the morning.

“Mass in the cathedral is awesome,” said Eberle, who was attending his first Men’s March. It helped introduce his children to Catholic life outside their small parish.

“I just love the music and the way the cathedral resonates with the voices of all the men,” said Skalet. “The smells, the bells, everything.”

The Men’s March is a way to answer Bishop Jenky’s call 15 years ago to “live what we say we believe,” he added, “to show it, not just say it.”

Looking at his sons, Skalet also said the event was also about “passing on the faith.”

EDITOR’S NOTE: More photos and a video from the Men’s March and Mass have been posted to The Catholic Post’s site on Facebook.