The Women's Choice Center of the Quad Cities, above, a pro-life pregnancy help center opened in 2002 at 2711 Happy Joe Drive in Bettendorf, Iowa, has announced expansion plans that include the purchase of the former Planned Parenthood of the Heartland clinic across the street. Abortion was among the services offered at the Planned Parenthood facility since it opened in 1999 after considerable controversy. (Provided photos)

BETTENDORF, Iowa — “We see this as a redemption project.”

Vicki Tyler, executive director of the Women’s Choice Center of the Quad Cities, was speaking about a development announced Monday that the area pro-life community also sees as two decades of prayer answered in a most unlikely way.

The Women’s Choice Center, a pro-life pregnancy help ministry, has purchased the former Planned Parenthood of the Heartland building across the street, which among its services offered abortions.

The 8,500-square-foot building is already being remodeled and plans call for it to be part of an expanded Women’s Choice Center “family campus” that will also include a pro-life, pro-family, faith-based family medical practice as well as a Christian-owned daycare.

“This is a big deal,” Tyler told The Catholic Post on Tuesday. “We’re asking people to pray for this.”

The Women’s Choice Center, which operates under the Life and Family Educational Trust, is also asking for financial support.

The former Planned Parenthood property at 2751 Tech Drive was purchased by a “straw buyer” — a local entrepreneur whose name is not being released — for $1 million. 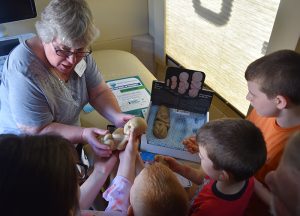 Vicki Tyler, executive director of the Women’s Choice Center of the Quad Cities, shows models illustrating human life from conception to birth to a group of young visitors to the center’s mobile unit in this 2017 file photo.  (The Catholic Post/Tom Dermody)

“We knew they wouldn’t sell it to us,” said Tyler, adding the mediator’s bid was accepted on Dec. 8, 2017 — the Feast of the Immaculate Conception.

The mediator then sold the building to the Women’s Choice Center. Tyler said that $150,000 has already been pledged to reduce the necessary bank loan, but that financial gifts are welcome to help pay off the mortgage.

She also stressed that Planned Parenthood sold the building for only about a third of what it had originally cost them and that the new purchase price will go to their remaining mortgage and “not to them or any of the garbage they do. We felt good about that.”

More details will be coming in the center’s next newsletter. Those wishing to donate immediately may do so online at womenschoicecenter.com or by calling the center at (563) 332-0475.

The Planned Parenthood facility in Bettendorf, built in 1999 after considerable controversy, was one of four clinics in Iowa that closed last year after then-Gov. Terry Brandstad signed legislation prohibiting state funding from going to Planned Parenthood and other abortion providers.

The Bettendorf facility announced it would not close, however, until a buyer was found. That’s when the Women’s Choice Center — which was established across the street in 2002 — began exploring purchase options.

“No one could have dreamed it would happen this quickly,” said Tyler. “They were there for 19 years. We were elated beyond belief.”

Tyler said that legal paperwork has occupied the last few months, including resolving a dispute over whether the facility is on a flood plain that would have meant a large added annual insurance cost. A subsequent study revealed that, by inches, the property is not on a flood plain.

But upon taking ownership, there was an important first task.

“The first thing the board did was we went to (Davenport Bishop Thomas Zinkula) and asked to have a priest come and exorcise the facility,” said Tyler. Two priests did so and “blessed it from one corner to the other.”

Members of the Knights of Columbus from councils on both sides of the Mississippi River have helped in necessary remodeling — tearing out carpet, painting, etc.

“We did not want women to see it as it was,” said Tyler, describing the condition as “pretty horrific.” But now, she said, “it’s looking totally different” — part of the redemption.

The former recovery room for abortion patients will become a chapel.

“God is taking what was very evil and changing it into something beautiful and warm and safe that families will want to come into.”

Half of the newly acquired property will be home to an expanded Women’s Choice Center of the Quad Cities, which for the past 16 years has offered services free of charge — including pregnancy testing, counseling, and the attempted reversal of the abortion pill — to women in crisis pregnancies. The center also provides material needs for mothers and babies including maternity clothing, diapers, wipes, formula and other baby items.

Two years ago the center added a Mobile Medical Unit, staffed with a registered nurse and social worker, providing the same services and making them available at seven different locations in the Quad City area.

The organization’s plan for the other half of the new building is to create the Quad Cities area’s first pro-life, pro-family, faith-based family medical practice.

“We have sought direction and advice from not only our board members and staff, but from local community leaders that believe a Christian-based family medical practice will fill a big need in our Quad City community,” said Mary Jones, president of the Life and Family Educational Trust board. “We are taking our time with this process to make sure that every decision we make is thoughtful and covered in prayer.”

“Those people who have been praying faithfully for years can now see this as the fruit of all those prayers,” said Tyler of the expansion project.

The center plans to move its services to the newly acquired building in mid-May. There will be no interruption of services, said Tyler.