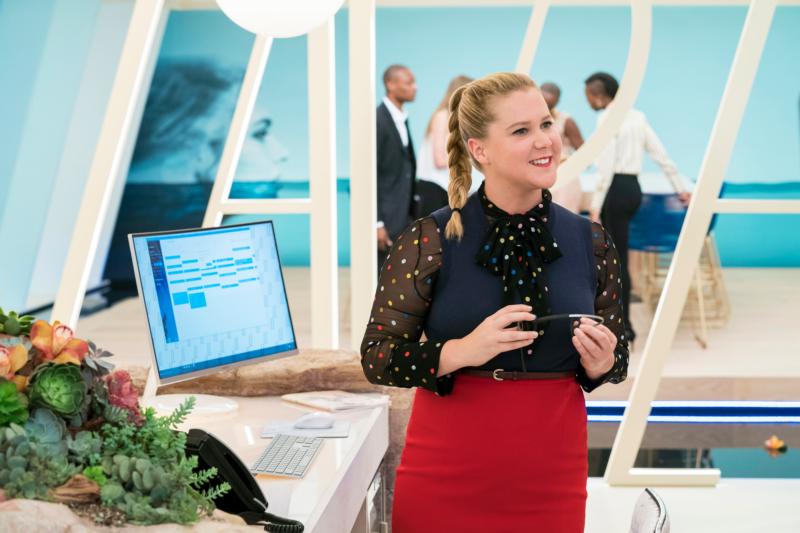 Amy Schumer stars in a scene from the movie "I Feel Pretty." The Catholic News Service classification is A-III -- adults. (CNS/STXfilms)

A thump to the head during a Soul Cycle workout gives a young, ambitious but out-of-shape woman (Amy Schumer) the illusion that she is suddenly slim and beautiful, and this supercharges her self-confidence, transforming her failing romantic life as well as her career at a cosmetics firm (led by Lauren Hutton and Michelle Williams). Though her fantasy alienates her from her closest pals (Aidy Bryant and Busy Philipps) for a time, it also lands her a sensitive new boyfriend (Rory Scovel).

Co-writers and directors Abby Kohn and Marc Silverstein have packaged an unbendingly cheerful girl-power fable that, despite its trite plot, conveys sound messages about self-esteem and showcases some good moral choices. A sequence in which the protagonist’s sudden boldness is shown to extend to sexual matters, however, may have the parents of teen girls, who are this film’s target audience, hesitating to give them the green light.

An implied nonmarital sexual encounter, obscured rear nudity, a single instance each of scatological and anatomical humor. The Catholic News Service classification is A-III — adults. The Motion Picture Association of America rating is PG-13 — parents strongly cautioned. Some material may be inappropriate for children under 13.