Largest, longest Bingo game in diocesan history opens, and you can still join 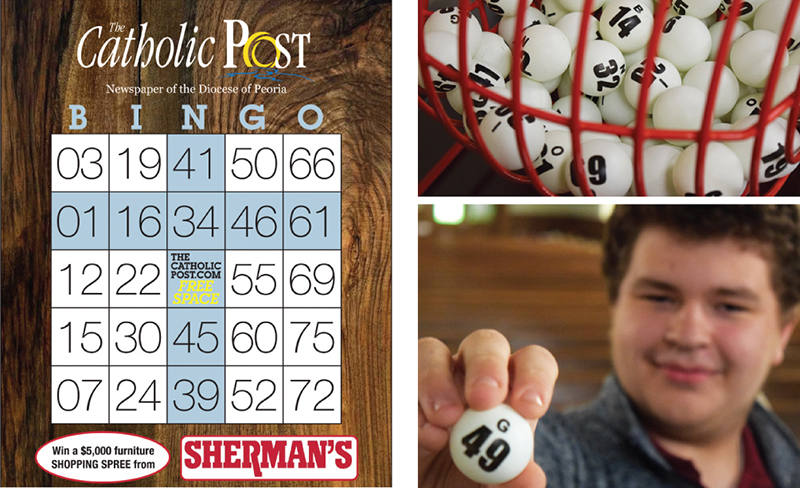 All paid subscribers to The Catholic Post receive a unique card in the first-ever, diocese-wide Bingo game. A new number will be revealed in each issue, and the winner will receive a $5,000 shopping spree from Sherman's.

The largest and longest game of Bingo in the history of the Diocese of Peoria is under way. Thousands are already playing, but there’s still room for you and your household to join the fun — and, more importantly, be an informed Catholic throughout 2018

The prize for the Bingo winner? A $5,000 furniture shopping spree at Sherman’s.

Unique Bingo cards were inserted in the April 15 edition of The Catholic Post, but only in the newspapers of those who had paid subscriptions via the Post’s 2018 Delivering Unity Campaign.

The April 15 edition also revealed the first number drawn: G49. Each biweekly issue will reveal a new number — drawn by a different Catholic newsmaker from somewhere in the diocese — until someone successfully fills in two outlined rows of their card that form the shape of a cross.

At a minimum, it will take eight more issues — 16 weeks — before someone hollers “Bingo!” The game may well continue throughout the rest of 2018.

And that would be just fine with The Catholic Post, which designed the game to promote further interest in — and revenue for — the newspaper of the Diocese of Peoria and its mission.

There is one further reason, according to Tom Dermody, editor.

“We think it’s going to be great fun,” he said. “Our hope is that our Bingo cards will be affixed to refrigerator doors in households around the diocese, and that when The Catholic Post comes in the mail a family member will rush to open it to find the next revealed number. In doing so, they will also discover more of the inspiring, informative content on our pages.”

HOW TO GET IN THE GAME

The Catholic Post will continue to mail cards to those who subscribe or renew their subscriptions in the coming weeks. There are three easy ways to do so:

Dermody expressed gratitude to Sherman’s — a family-owned discount appliances, electronics, furniture, and mattress store with three locations in the diocese — for providing the game’s prize.