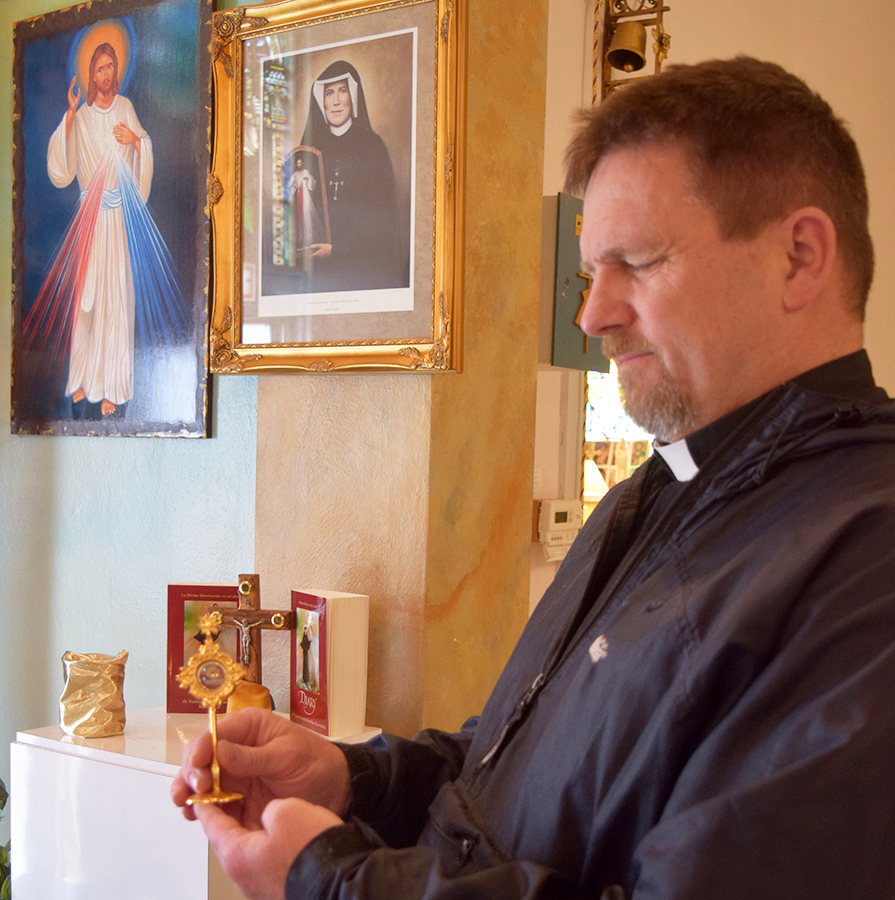 Father Kevin Creegan, pastor of St. Mary Parish in DePue, holds a first-class relic of St. Faustina Kowalska, whose visions of Jesus inspired the Divine Mercy Sunday devotion and message. The parish has created a space in the church to display the relic that includes a photo of St. Faustina, the Divine Mercy image, a kneeler, votive candles, and books of her Diary. (The Catholic Post/Tom Dermody)

DePUE — When Catholics of the DePue area gathered for Divine Mercy Sunday devotions on April 8 at St. Mary Church, they prayed in the presence of Jesus in the Blessed Sacrament and before a first-class relic of the Polish nun whose visions of Jesus inspired the Divine Mercy message and devotion. 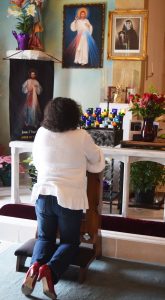 Guillermina Mares leads the Divine Mercy Chaplet on April 8 at St. Mary Church in DePue. She is kneeling at a shrine area that Father Kevin Creegan, pastor, has created in the church to display his first-class relic of St. Faustina Kowalska, whose visions of Jesus inspired the Divine Mercy devotion. (The Catholic Post/Tom Dermody)

In early February, the parish blessed a shrine area in the church to display the relic — a bone fragment from St. Faustina Kowalska — that was given to Father Kevin Creegan, pastor, in his seminary days.

Father Creegan told The Catholic Post that in 1999, while at St. Mary Seminary in Maryland, he and two other seminarians took a weekend trip to the National Shrine of the Divine Mercy in Stockbridge, Massachusetts. There they met Father Seraphim Michalenko, MIC, vice postulator for Sister Faustina’s sainthood cause.

One seminarian asked Father Seraphim if he had relics of then-Blessed Faustina, who would be canonized the following year. The priest, a member of Marians of the Immaculate Conception, produced three — one of which Father Creegan received. The relic had been in Father Creegan’s private chapel until February. 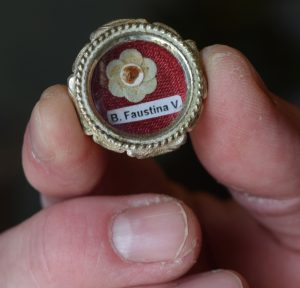 A close-up of the relic of St. Faustina displayed for prayer and veneration in a display case at St. Mary Church in DePue. (The Catholic Post/Tom Dermody)

“I wanted to make it available to people,” Father Creegan told The Catholic Post after leading Divine Mercy Sunday devotions. The relic is displayed on a pedestal in a glass encasement that also holds a crucifix, the relic’s documentation in Latin, and two copies of St. Faustina’s Diary, one in English and one in Spanish, reflecting the parish’s large Hispanic population. A framed photo of St. Faustina hangs above the relic, and nearby are several images of Jesus as Divine Mercy. A stand of votive candles and a kneeler complete the shrine.

Father Creegan said the church’s Divine Mercy shrine has been well received, and that his personal devotion to Jesus as Divine Mercy has grown through the years. He has twice listened to an audio book version of St. Faustina’s Diary — in which she recounts the visions and messages.

“It really helps you to know what Jesus is offering us in these graces and in his appearances to Faustina,” said Father Creegan.