The Diocese of Peoria’s 15th annual Men’s March and Mass will bring hundreds of Catholic men and boys to the Peoria riverfront on Saturday, April 28, to explore a theme that is both timeless and current: “St. Joseph and the Holy Family.”

Since the first “A Call to Catholic Men of Faith” in 2004 was inspired by Bishop Daniel R. Jenky’s request for Catholics to “rise up” and defend the faith, the annual event has been under the patronage of St. Joseph the Worker and held near his feast day, May 1. 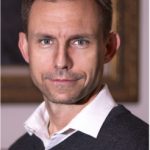 But this year’s anniversary event comes just five months after the release of Bishop Jenky’s latest Festival Letter, titled “St. Joseph.” And that teaching document has inspired nearly every aspect of the 2018 march, starting with the choice of the pre-march speaker, Devin Schadt.

Schadt, a married father of five who lives in Davenport, Iowa, is co-founder of the Fathers of St. Joseph, a confraternity of men who strive to follow the wisdom and example of the foster father of Jesus. A frequent speaker on the topic fatherhood, he is also the author of the book “Joseph’s Way: The Call to Fatherly Greatness.”

GATHER ON THE RIVERFRONT

In issuing an invitation for all men of the diocese — “young and old, married, single, religious, and our priests” — to take part in this year’s march and Mass, Bishop Jenky praised St. Joseph’s openness to God.

“Amid all the noise of this world, he possessed an interior silence which allowed him to hear the truth of the Scriptures and even perceive the guiding message of angels,” wrote the bishop. “We, too, must pick up our cross and allow God to speak into our hearts.”

The morning begins at 8:30 a.m. with an opportunity for the sacrament of reconciliation at stations set up on the banks of the Illinois River behind the Gateway Building, located at 200 N.E. Water St. at the foot of Hamilton Boulevard.

The men will gather for opening prayer and announcements at 9 a.m., followed by Schadt’s talk.

The crowd will then prayerfully march approximately one mile through downtown Peoria to St. Mary’s Cathedral for a 10:30 a.m. Mass celebrated by Bishop Jenky, followed by an optional lunch and time of fellowship at the nearby Spalding Pastoral Center.

Coordinating the event is a nine-member committee, assisted this year by Karley Bates, programs coordinator for the diocese’s Office of Evangelization and Faith Formation.

“It’s been fun to see how enthusiastic the men are about this event,” Bates told The Catholic Post. “They get so much joy” from planning something that “makes a positive impact and shines back to their families.” Joining Bates on the committee are Maurice Alouan, Deacon Mike Schallmoser, Clyde Dennis, Darhal Wolf, Jim Stomberg, John Kilian, Phil Lee, and Sister Ana Pia Cordua, SCTJM.

Bates said that all those who attend will receive a special anniversary edition of the commemorative medallions that have proven to be popular keepsakes of the annual march.

While there is no charge to attend “A Call to Catholic Men of Faith” and no need to make reservations, the traditional lunch of “pork on a stick” will again be offered by Raber Packing Company. The cost this year is $8, payable at the event. The men’s club of Holy Family Parish, Peoria, will be offering coffee and doughnuts at the pre-march rally.

“This year we march, encouraging each other to be humble men of God as we stand in defense of faith, freedom, family, and the priesthood,” wrote Bishop Jenky. “I would be honored if you and the men of your parish would support and attend this march and Mass.”